On view through Saturday, April 11th

A Post-Atomic visual troubadour, Tony Tasset continues to define the vanguard of Pop Conceptualism. From the monumental stoicism of a massive fiberglass Eye sculpture watching over downtown Dallas like a Neo-Surrealist sentinel, to a slumping, exhausted Paul Bunyan that pays sad tribute to manifest destiny gone awry, to the frailty and nuanced melancholy of a to-scale sculpture of a ripped Styrofoam cup, Tasset has demonstrated, time and again, a unique ability to memorialize the peculiar beauty and pathos of the American visual vernacular.

For The Weight, Tasset mined the innermost provinces of the contemporary human psyche, responding to the anxiety of our times with wit, gravitas, and salt-of-the-earth sagacity. Working in his western Michigan studio like an aesthetic Dr. Frankenstein assembling an assortment of Post-Modernist monsters—part Woody Guthrie, part Robert Crumb, part Jeff Koons, part Louise Bourgeois—Tasset has concocted a confident, unified sculptural statement he describes as “a reckoning; an apocalyptic mix-tape.”

Snakes writhes like a tempestuous sea of taxidermical flesh and plush, a “sacred and profane pop nightmare” blurring the boundary between what’s phony and what’s real.

Ghosts impishly guards the glittering portal to an infinite beyond, a spirited reflection on impermanence.

“My art has always responded to the cultural moment, the current zeitgeist,” says Tasset. “The Weight was made in response to the current state of the world. Things are heavy.”

Tony Tasset’s work was featured in the 2014 Whitney Biennial of American Art and is included in the permanent collections of the Carnegie Museum of Art, Pittsburgh, the Baltimore Museum of Art, the Art Institute of Chicago, the Museum of Contemporary Art, Chicago, the Museum of Contemporary Art, Los Angeles, the San Francisco Museum of Art, and several other important institutions. Tasset has received the John Simon Guggenheim Foundation Award and the Louis Comfort Tiffany Foundation award, among others. His large-scale sculptures dot the landscape of dozens of America’s beloved public spaces, including the Art Trail at Crystal Bridges Museum of American Art, the lot of Sony Pictures Studios in California, and public plazas in Chicago, Cleveland, Pittsburgh, Dallas, and many other cities. Tasset is an emeritus professor at University of Illinois- Chicago. 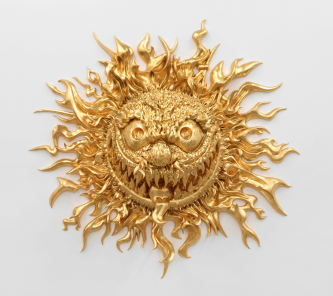