On view through Saturday, March 28th

We are thrilled to announce our upcoming solo exhibition Elnaz Javani: “Your Residue ته مانده تو,” which centers around the Iranian born artist’s fabric based objects and installations. Created between 2013 and 2019, the work presented in Your Residue is tied to the physicality of the human body, its psychology in the face of cultural uprooting, and the artist’s own experiences balancing her dual identities as an Iranian and an American.

Her stories, as well as fictional narratives, are told through her Inner Compulsion series as an attempt to understand the way multiple identities can live within one person and their body. The embroidered illustrations depict the human figure in moments of disorientation and disruption, both mental and physical. The series was started in 2013 after Javani moved to the United States as an outlet to work through her understanding of identity beyond culture and geographical boundaries. Concepts of displacement and translocation are also exemplified in her fiber objects My Effigies and Cell whose forms are variable depending on how and where they are placed.

The body as well as time and identity, is further examined in Javani’s Fate series, which is fabricated from coats gathered during the artist’s tenure working at a women’s rights organization in Iran. Through her additive and reductive process of sewing and manipulating the found coats Javani forces them to reveal their vulnerabilities while simultaneously losing their functionality. The material provides her with hints of the memories, experiences, and identities of the coats’ previous owners, which then informs fictional stories that she embroiders in Farsi calligraphy.

Javani’s deeply sensitive work reminds us that even when it appears that the contemporary fabric of humanity is being held together by a thread, these interwoven stories keep it firmly stitched together. 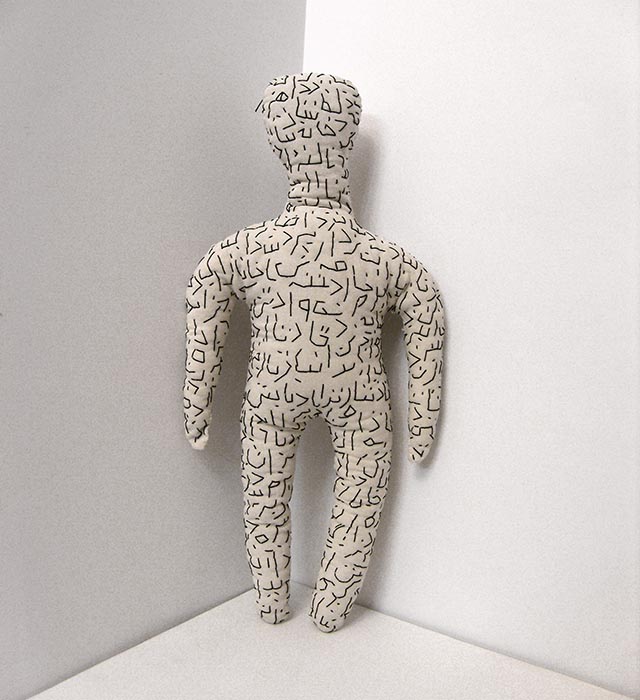