Don’t You Stop, We Won’t Stop

Don’t You Stop, We Won’t Stop

For the past seven years of Krampusnacht, I have sidestepped the European relics in favor of thoughts about American undercurrents—rowdy, sexual, heretical, and perilously savage. But I like to imagine that the deeper magma is something propulsive and generative, rather than malignantly atavistic. An inevitable rebellion against civilized living.

With Edra’s prodding, I’m pursuing the Dolly tangent: imagining a history in which the liftoff of her solo career was profoundly controversial—to the point that an enclave of armed male consorts developed around her. Perhaps her audience had detected a Luciferian bent in her, that would need time to transition to a more acceptable yet radical Christianity.

EC Brown: I prefer a collision of illustrative image-making that begs attention to narratives, and physical formats that shift these works into roles as implements or tactical objects addressing spaces and situations. Images have been a tempered fever-dream drawing from 1960s–70s aesthetics, pop occultism, science fiction, Modernist architecture, biomimetics, industrial photography and observational cinema. Often they are absurdist historical revisions.

Since 2005, I have mostly operated in Chicago’s domestic artspaces. I co-organized Floor Length and Tux (2009–2014, with Catie Olson) and COMA (2006–2008, with Annika Seitz). I periodically organize a roving series entitled ASCII (2011–present). Since 2015, I have been conducting a discreet series out of my home entitled Tascam.

Mother is a noun and a verb; I regard my practice as a sourdough, a gestation of material, out of which individual works, texts, and shows are wrought, while the mother remains, active.

Lise Haller Baggesen is a Danish born, Amsterdam raised, Chicago based, interdisciplinary artist. Her hybrid practice includes writing, installation, performative, sartorial and textile-based work. She is the author of Mothernism, and exhibits internationally, most recently with the multimedia show HATORADE RETROGRADE: THE MUSICAL, which premiered at SoEx in San Francisco in 2019 and will travel to G400 in Chicago in 2020

When considering the human form and its relationship to memorialization, immediate thoughts of bronze statues at historical sites come to mind. My fascination, however, is in the way that memory—with its inherent, ever-changing fluidity—disrupts our ability to fully or truthfully freeze, or memorialize people, moments, or perspectives in history. Instead, it is our momentary glimpses of memory and hindsight that drive how we understand the present.

As a Mexican immigrant to the United States, my works often rely on my own fragmented memories and stories of home, my direct experiences with fervent Catholicism, and other’s heroic (yet common) anecdotes of border crossing and acclimating to living in America. However, while my memories and relationships to patriotism, politics, my background, and my longing for the familiar certainly influence my work, it is my interest in the process, the poetics of the materials, and the action of sculpting that motivate my continued practice.

Sarah Beth Woods is a Chicago-based multidisciplinary artist. Woods’ background as a painter and critical cultural worker has led to an interest in the aesthetics and political implications of modern surfaces and the body, specifically skin and hair, saturated color and shine. Cultural influences derived from formative years spent on the Southwest side of Chicago continue to manifest in the content and aesthetics of Woods’ work, specifically black material culture and women’s conceptual spaces as sites of possibility and transformation.

*Featured
artist in Jenn Freeman’s “The People’s Church of The G.H.E.T.T.O” and the 10th edition of Erin Kilmurray’s “The Fly Honey Show”. 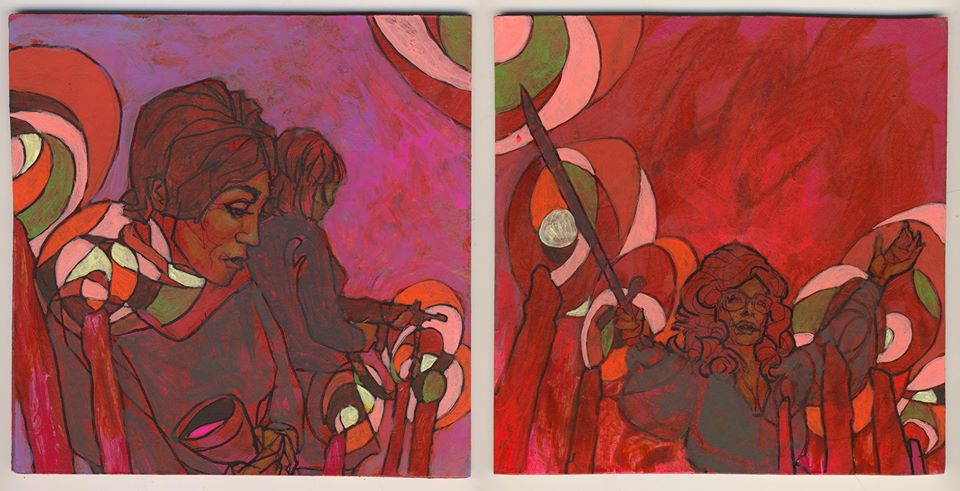