On view through Saturday, March 21st

moniquemeloche is thrilled to present Estoy Bien, an exhibition of new Air Paintings by Candida Alvarez. This is Alvarez’s first exhibition with Monique Meloche and her first solo gallery exhibition in Chicago.

The work of Candida Alvarez is imbued with both personal and formal aspects which evolve through her relationship to color, light, and architectural elements. These unique paintings, on view for the first time in Chicago, originated as proofs intended for an installation as part of the inaugural Chicago Riverwalk Year of Public Artprogram (2017). The images took on a new resolve however after the passing of the artist’s father, followed shortly by Hurricane Maria, which devastated her family’s home in Puerto Rico. Drawing inspiration from the continued resilience and support of family, friends, and her community, Alvarez found solace in the studio and in the echo of two words that were widely spoken by the island’s survivors, Estoy Bien(I’m Fine); with the lingering memory of this phrase as her muse, the once forgotten series of proofs grew into a new series of paintings, serving as a palimpsest of growth and fortitude.

Drawing from the narrative of place, Alvarez pulls from materials in her immediate world and her travels to build dreamlike narratives existing somewhere between fact and fiction. Patterns on the floor, memories from childhood, and photographs function as ways of infusing her world into each painting. This new series of work suspends carefully within an aluminum frame, allowing the image to grow beyond conventional restrictions, presenting as a dual-sided painting. Light plays a crucial role; the use of a paper thin pvc mesh as a canvas allows for light to permeate each image, creating the sensation of color and form existing without boundary, as if each painting can live unrestricted, floating within space. Colors are charged with personal significance, saturated reds embody the lush flamboyán trees of Puerto Rico and the lipstick commonly modeled by the women in her family, vivid blues are evocative of the relief tarps covering the island post disaster, rich browns and golds evoke the true splendor of the land and it’s resolute spirit.

When creating each image on view, Alvarez engaged what she calls a ‘tourist mentality’, exploring the world around her with unremitting curiosity, investing thoughtful attention into that which is often deemed ordinary. Alvarez’s principal tool for visual exploration is the lens of an iPhone, from which she carefully photographs details of the world around her, at home in Chicago and on her travels abroad – tar spackled city sidewalks, twisted and overgrown limbs of trees, jewel toned stained glass, light cascading off reflective skyscrapers, all snapshots of the everyday in which she finds brilliance. This process offers Alvarez a unique way of seeing, so that the familiar loses the confines of a fixed shape and definite form, leaving behind an abstracted portrait of the world around her.

Coinciding with the opening of Estoy Bienis the release of Alvarez’s much anticipated and comprehensive monograph, “Candida Alvarez: Here. A Visual Reader”, published by Green Lantern Press.  The monograph follows her first major institutional exhibition, “Here”, which was on view at the Chicago Cultural Center in 2017, and will celebrate the artist’s creative career, spanning over four decades.  Contributors include Terry R. Myers (Curator of “Candida Alvarez: Here”), Dr. Kellie Jones (Columbia University, New York), and Elizabeth Alexander (President of The Andrew W. Mellon Foundation).

Candida Alvarez(b. 1955 in Brooklyn, NY) received her MFA from the Yale School of Art, New Haven, CT 1997. Alvarez was commissioned by the City of Chicago to create four large paintings, installed along lower Wacker Drive on the Riverwalk in downtown Chicago, as part of the inaugural Year of Public Art, an ongoing city-wide public art initiative. Alvarez was also tapped by Rei Kawakubo, founder of international fashion house Comme des Garçons, who transformed six of her paintings into prints featured in their Fall 2017 menswear collection.

She currently lives and works in Chicago, IL where she holds the F.H. Sellers Professorship in Painting at the School of the Art Institute of Chicago. 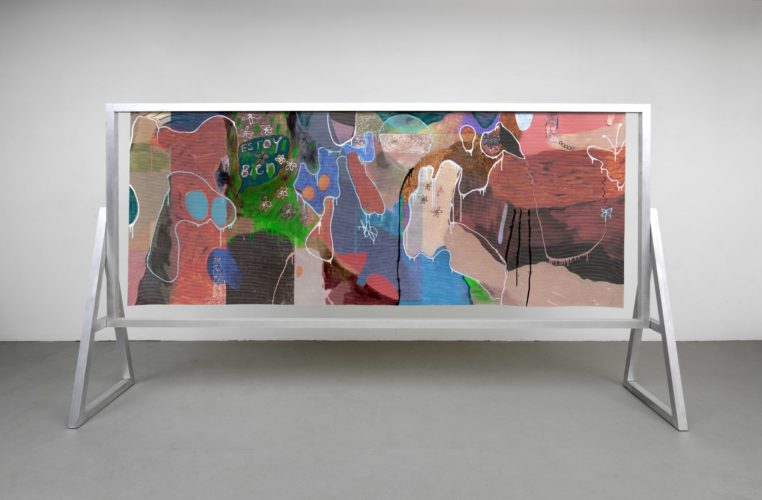