PARK ROW charts the rise of newspaper reporter Phineas Mitchell (Gene Evans) as he starts his own daily, The Globe, in direct competition to the sometimes violent, always unethical practices of the dominant paper, The Star (Mitchell’s previous employer). However, the publisher of The Star, Charity Hackett (Mary Welch), will not give up her readership easily and orders sabotage on the Globe—even as Phineas begins to fall for her.

“Park Row establishes the director’s penchant for tackling a range of social and political issues in an unashamedly declamatory style. Eschewing the label of political filmmaker, (“Politics doesn’t interest me… I’m just interested in character”) Fuller nevertheless acknowledged his unapologetically pedagogical use of the medium:

Every film must have a message. Maybe I’m too didactic. If so, too bad. That’s just the way I write. Even if people don’t agree with me, I like to make them think a bit. I’m not what you would strictly call an educator, but all the same, I think the cinema must be used in this way…” — Rose Capp for Senses of Cinema

*Doors open at 5:30 PM & screening begins at 6:00 PM
This is a FREE screening with limited seating; please come early to save a seat. 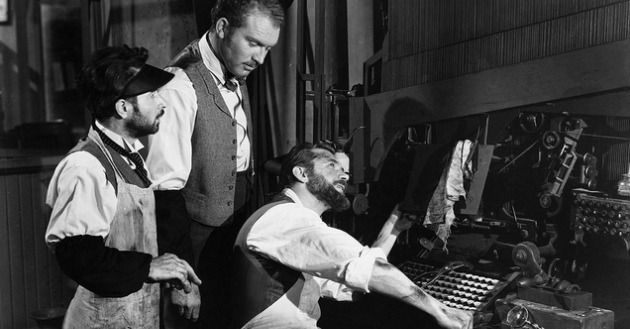