Elmhurst Art Museum (150 South Cottage Hill Avenue) proudly presents Sandra Jorgensen, a broad survey exhibition showcasing the works of the late artist-curator who was the driving force behind the internationally known Elmhurst College Chicago Imagist collection and helped found the Elmhurst Art Museum. Her works, however, have often been overlooked. The exhibition, on view January 25 – April 12, 2020, is dedicated to Jorgensen’s artistic accomplishments—as a painter, photographer, and her role as a major caretaker of Chicago’s cultural history.

Jorgensen (1934 – 1999) held positions as professor and chair at Elmhurst College, and curator of the Elmhurst College Art Collection, for many years. An accomplished painter, she worked in oil and specialized in contemporary American landscapes and still life compositions. In addition to her paintings, the exhibition includes a series of never-before-printed photos taken by Jorgensen of the Chicago Imagists in their homes and studios.

During her lifetime, Jorgensen’s work was displayed at the Art Institute of Chicago, Richard Gray Gallery and Hokin Kaufman Gallery. In 1985, a mural created by Jorgensen was commissioned by the City of Chicago for the Sulzer Regional Library and dedicated to former Mayor of Chicago, Harold Washington. The mural—which illustrates ethnically diverse children in formal, geometrically shaped gardens—will be recreated for this exhibition.

“Sandra’s connoisseurship and vision were critical to the College’s art collection, as well as the formation of the Elmhurst Art Museum,” said John McKinnon, Executive Director of Elmhurst Art Museum. “We are proud to pay tribute to this beloved artist, friend and mentor to many, and place her work amongst the larger stories of Chicago and Midwestern artists.”
Jorgensen served on the board of the Elmhurst Fine Arts and Civic Center Foundation; the entity that helped start the Elmhurst Art Museum. As curator, Jorgensen was the driving force behind maintaining and growing the Elmhurst College art collection. In doing so, she became a major caretaker of Chicago’s cultural history, and amassed an internationally known collection now considered to be “the finest of its kind” by the late James Yood, former art critic and teacher at School of the Art Institute.

About Elmhurst Art Museum
Elmhurst Art Museum is located at 150 South Cottage Hill Avenue in Elmhurst (IL), 25 minutes from downtown Chicago by car or public transportation (Metra). The Museum is both an international destination for Mies van der Rohe scholars and fans and a regional center where people from Chicago and the western suburbs learn to see and think differently through the study of the art, architecture and design of our time. The Museum is one block from the Elmhurst Metra station and open Tuesday-Sunday from 11am -5pm. Admission is $15 ($12 for seniors) and free for students and children under 18.

In September 2019, the Elmhurst Art Museum released a new modern and approachable graphic identity to better highlight the organization’s vision for art, education & architecture. The updated look distinguishes the unique art center as a dynamic site to inspire and enrich its community.
The Sandra Jorgensen exhibition is sponsored by Sally J. and Raymond J. Allen, Marcia and Robert Goltermann, and Elmhurst College.
Simultaneous with Sandra Jorgensen, Elmhurst Art Museum will be mounting Could Be Architecture: McCormick AfterParti, also January 25 – April 12, 2020. The interactive installation in the historic McCormick House allows visitors to playfully explore the home’s original 1952 floor plan through playful interventions.
For more information, please call 630.834.0202 or visit elmhurstartmuseum.org.
### 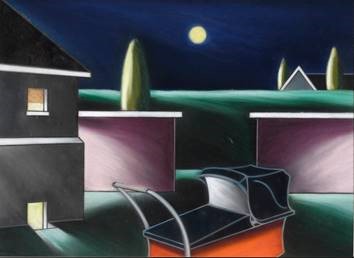