Extase is thrilled to present On Colonus, a solo exhibition of new work by Chicago-based artist Morgan Mandalay. The title of the exhibition is borrowed from Sophocles’ play, Oedipus at Colonus, produced by his grandson of the same name in 401 BC. Oedipus at Colonus is, among other things, about overcoming shame and achieving atonement. At Colunus, Oedipus is a blind exile of Thebes, wandering away from his home and his sins. The paintings Mandalay produced for On Colonus are concerned with investigating memory, identity, and personal growth, and the consternation or confusion that can manifest in tandem with that exploration.

Prior to this exhibition, Mandalay’s most recent body of work were paintings of paradise, which he described as “a place defined more by a moment than a landscape”; the term ‘paradise’ was then linked to his family’s exile from Cuba in the early 1960’s. These new works are similarly concerned with reaching towards the past to discover something utopian. The black, gray, and navy tones that are prevalent in all of the paintings serve as the antithesis of manifesting paradise, and yet this is precisely what the work seeks to emanate. As the artist states: “A burning paradise is visible through the windows of these interiors. In these paintings, a home has been built inside of paradise; a memory. In this home, I am attempting to find my place; but as memory is filled with shadows and gaps and holes, I am wandering blind attempting to construct this home and construct this narrative of myself.”

In these figurative interior paintings, though preoccupied with paradise, some viewers might understand the glimmers through the windows as equally apocalyptic. The figures often look relaxed in reclining poses – shoes off with white socks visible on crossed feet – but they also remain faceless and blind, as Mandalay previously mentions. In place of the faces are blurred, reddish, ruddy complexions, as if the face was scorched by the nearby enlarged candle flame present in “Reflection Underground,” for example. In the background of this piece, a bellowing monster-esque face looms over the equally mysterious and perplexing figure. The interiors in these paintings are haunted, haunted by the muddled figure, his memories, and the nearly lightless rooms; and yet it does not seem any safer to exit the home and commune with the moody nature. Also present in these paintings, perhaps providing the one bright pop of color, are singular yellow lemons. Lemons and often festering fruits are part of Mandalay’s painterly iconography and could be construed as a sign of hope in that life is still blooming despite the eerie interiors and unwelcoming, menacing exteriors. In these works for On Colonus, interior and exterior become conflated, and it is not clear which setting is safer or more hospitable for hosting life. That said, to the artist these works are symbolizing home or a simulated version of home, albeit one that is elusive and subject to change. 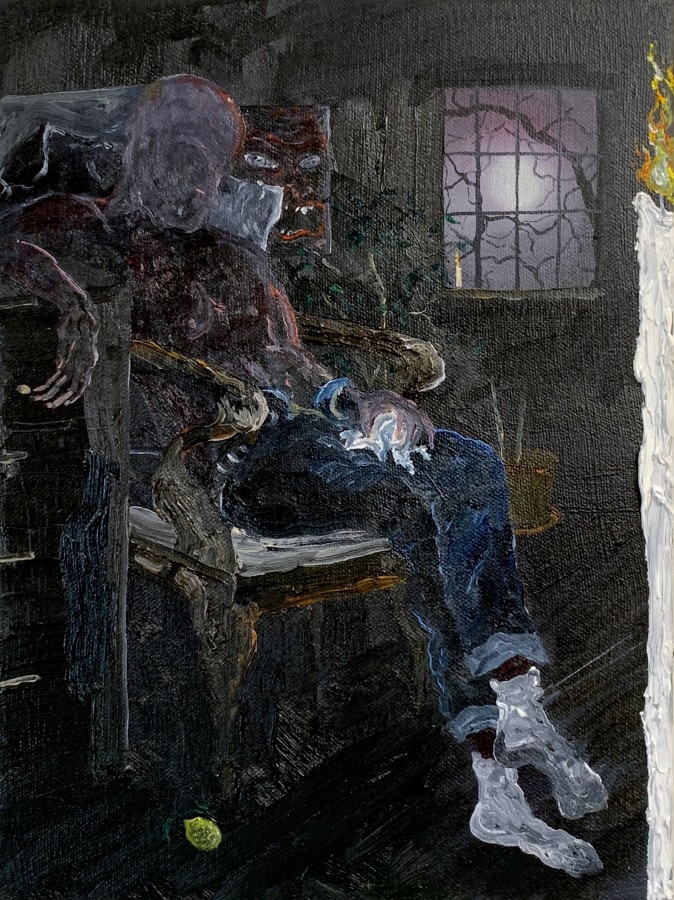