On view through Sunday, May 16th

Hive is a site-specific sculpture and sound commission by Nancy Davidson and Lakshmi Ramgopal, two artists with distinctive practices collaborating for the first time at Krannert Art Museum.

On view until spring 2021, Hive is housed within and responds to the architecture of KAM’s 1988 Kinkead Pavilion, a postmodern addition to the museum designed by architect Larry Booth. The portico presents the museum as a temple, with a Midwestern mash-up that makes reference to the ancient world through the structure’s large scale, classicizing columns, and inscribed frieze.

Hive features two inflatable sculptures by Davidson, each approaching twenty feet tall and lit from within, filling the portico. Ramgopal’s sound installation is housed in the same space, involving a range of vocalizations experimenting with breath—partly composed and partly randomized by a computer algorithm so that the sound never repeats.

Davidson and Ramgopal drew their inspiration from Artemis of Ephesus, the multi-breasted cult goddess of the ancient Mediterranean. Davidson’s sculptures exaggerate Artemis’s bodily qualities: her multiple breasts a sign of fertility, possibly in the form of a beehive. Hive’s sculptures incorporate a braid emerging from the top of each piece and continuing to the pavilion floor to suggest caryatids, a feature of ancient Greek, Roman, and later classicizing architecture, in which women with braided hair provide physical support for a building. Along with Ramgopal’s soundscape, Hive indicates feminized bodies as unpredictable organisms with textures and reverberations that behave through and despite the structures seeking to contain them.

To expand and comment upon the project’s questions about the legacies of the ancient world, the curators have developed a collections installation in the adjacent Kinkead Gallery, Artists Interpret the Ancient World, featuring paintings, sculpture, and works on paper from KAM, along with plaster casts and other objects on loan from the Spurlock Museum, from antiquity to the present day. 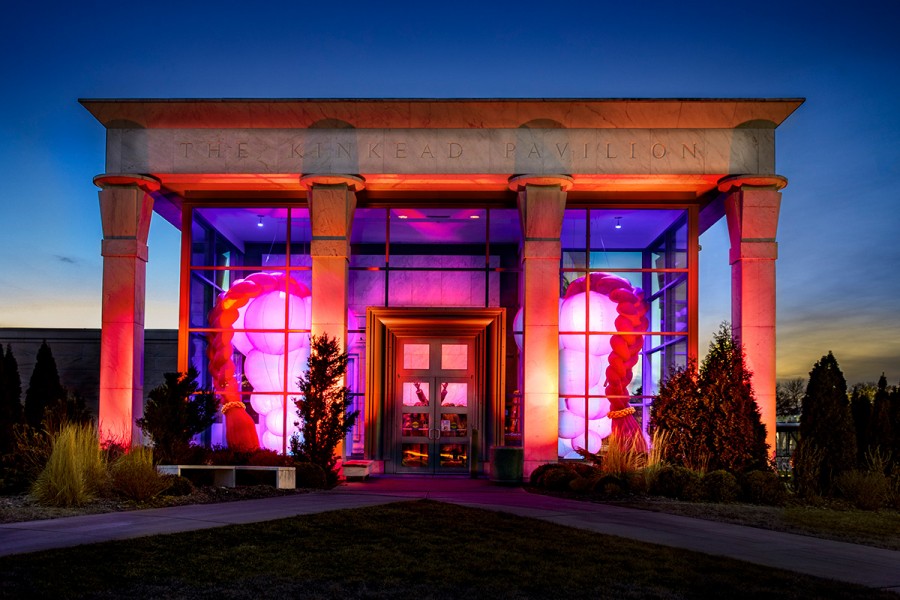