Could Be Architecture: McCormick AfterParti

Visitors to Could Be Architecture: McCormick AfterParti are invited to explore the home in its original configuration by ducking through rounded portholes into various rooms, relaxing on pull-out seating in the living room, enjoying culinary delights on shapely kitchen cabinets during exhibition-related events, while younger visitors play with an interactive puppet theatre in the house’s dedicated playroom space.

“The McCormick House is full of continual reinterpretation, (inter)activity, and life,” said John McKinnon, the Museum’s Executive Director. “The way Joseph and Zack animate the architectural space creates an incredibly fun and collaborative experience for our visitors of all ages.”

Could Be Architecture’s clever wordplay sets the tone for the show; “parti” refers to the basic diagrammatic concept layout for an architectural design. This installation celebrates Mies van der Rohe’s original floor plan with interventions and events in conversation with artistic elements placed along the locations of the McCormick House’s original wall partitions.

During the exhibition, the house will be the site of numerous events and audience interactions, highlighting the space as one of continual inspiration, while also having open discussions about past and future preservation efforts.

About Could Be Architecture
Could Be Architecture is a Chicago-based design practice directed by Joseph Altshuler and Zack Morrison that designs seriously playful spaces, things, and happenings that celebrate what our world could be. They work across scales, including designs for buildings, interiors, installations, scenographies, exhibits, furniture, costumes, and publications. As practitioners and academics, their work is equally invested in built pragmatics and speculative research. As citizens and artists, their work is committed at once to public engagement and aesthetic ambitions. They aim to create architecture that tells stories, builds audiences, resonates with people’s emotions, and instigates enthusiasm around the activities and imagery that it stages. Their work positions architecture as an active character in the world, enacting a future full of wonder, humor, color, and delight. Could Be Architecture also publishes SOILED, a mashup of a literary journal and design magazine that narrates a playfully sincere and seriously humorous exploration of oft-overlooked dimensions of our built environment.

About the McCormick House
In 1952, the renowned modern architect Mies van der Rohe (1886-1969) designed a home for Robert Hall McCormick III, a member of Chicago’s most prominent families, and his wife, the poet Isabella Gardner. The house was later lived in by families of Arthur and Marilyn Sladek, Ray and Mary Ann Fick, and then purchased by the Elmhurst Art Museum for a new arts complex. The house is a rare and important example of Mies van der Rohe’s mature style, incorporating elements of his celebrated designs for the Farnsworth House (1951) and 860-880 Lake Shore Drive (1951). The McCormick House—one of only three single-family homes designed by Mies in the United States—originally served two purposes: it was a home for the McCormick family and a prototype for a proposed group of smaller, affordable mass-produced modular homes in the western Chicago suburbs that McCormick and co-developer Herbert S. Greenwald were hoping to build. However, the cutting-edge, high-end buildings were not met with enough buyers to begin construction. The house became part of the Elmhurst Art Museum’s campus in 1994, and important restoration efforts have been recently undertaken. In 2018, the McCormick House’s façade and Mies van der Rohe’s original carport design were revealed for the first time in nearly twenty-five years.

About Elmhurst Art Museum
The Museum is located at 150 South Cottage Hill Avenue in Elmhurst (IL), 25 minutes from downtown Chicago by car or public transportation (Metra). The Museum is both an international destination for Mies van der Rohe scholars and fans and a regional center where people from Chicago and the western suburbs learn to see and think differently through the study of the art, architecture and design of our time. The Museum is one block from the Elmhurst Metra station and open Tuesday-Sunday from 11am -5pm. Admission is $15 ($12 for seniors) and free for students and children under 18.

In September 2019, the Elmhurst Art Museum released a new modern and approachable graphic identity to better highlight the organization’s vision for art, education & architecture. The updated look distinguishes the unique art center as a dynamic site to inspire and enrich its community.

Simultaneous with Could Be Architecture, Elmhurst Art Museum will be mounting Sandra Jorgensen, also January 25 – April 12, 2020. The broad survey exhibition showcases the works of the late Elmhurst-based artist-curator whose efforts have had a major national and international impact and yet, have often been overlooked.
For more information, please call 630.834.0202 or visit elmhurstartmuseum.org. 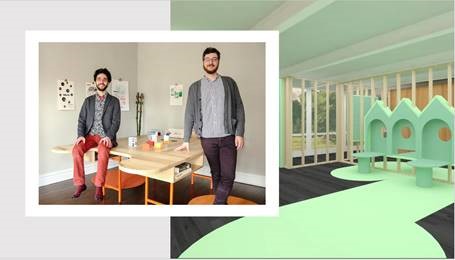