The Era Footwork Crew: IN THE WURKZ

Drums, bass and synthesizers shake the room to life. Dancers appear under spotlights on stage and in the audience, kicking their legs in slow motion. Smoke billows from the side stage. One of the dancers recites a poem: “In Chicago / in the land of flame / there was born a dance / without a name.”

IN THE WURKZ is a touring dance project based on the lives and dreams of dancers on the west and south sides of Chicago. This evening-length show unveils a history of footwork dancing, tracing its development from “the holy ghost” – the first footwork dance move inspired by the motion of ghosts and spirit possession in church – to a citywide, black teenage dance culture that keeps kids safe in dangerous neighborhoods across Chicago. IN THE WURKZ expounds on this dance history through the movements, films and poetry of The Era Footwork Crew with original music from Chicago’s Teklife DJs.

Performances of IN THE WURKZ at Links Hall represents “the community debut” of this long-developing project by The Era Footwork Crew. IN THE WURKZ will premier nationally and tour throughout 2020-21.

Written and directed by:

Though Chicago footwork is sometimes pigeonholed as “street dance,” The Era’s work frames authorship, formal depth and virtuosity in the vernacular, bringing credit, context and remuneration where it is due. Generally, street dances have been seen as raw material for the American stage, perhaps too often translated by interlopers or nonlocal choreographers and producers. The Era hopes to shift and break this old paradigm. They are not anthropologists mining a foreign tradition of dance, as much as they are drawing critically from their own experiences and from the trials and tribulations of footwork dancers over the last 30 years in black Chicago, a history that they are uniquely privileged to share with IN THE WURKZ.

The Era is a creative collective founded in 2014 on the South Side of Chicago by footwork dancers Jamal “Litebulb” Oliver, Brandon “Chief Manny” Calhoun, Sterling “Steelo” Lofton and Jemal “PTop” De La Cruz and filmmaker Wills Glasspiegel. In 2016, the group was recognized as one of Chicago’s “cultural organizers of the year” by FADER Magazine for bringing footwork dancing to the stage. They were selected as “choreographers of the year” in 2016 by Chicago publication New City, and appeared on the cover of another New City issue dedicated to the “50 Performers That Do It For Chicago.” The Era has performed across Chicago and the US, and in other countries, including Japan, Kuwait, Mexico, and the UK. For IN THE WURKZ, The Era has teamed up with long-time Era partners: dancer Elisha “Eleelee” Chandler, and dancer Diamond Hardiman. In collaboration with the nonprofit Open the Circle, The Era’s work has garnered grants and recognition from prominent institutions, including the Field Foundation of Illinois, the MacArthur Foundation, the Joyce Foundation, and University of Chicago. In 2019, The Era and Open the Circle were awarded a National Dance Project Grant from the New England Foundation for the Arts for IN THE WURKZ.

Jamal “Litebulb” Oliver is a dancer and dance activist at the forefront of footwork culture in Chicago. Known for the intricacy and creativity of his dancing, Litebulb has performed with leading artists such as Chance the Rapper and DJ Rashad. Since 2009, he has traveled to international stages, from PS1 MoMA to the Barbican in London. Litebulb co-founded The Era in 2014. His practice is both intensely local and broadly international. In 2017, he co-founded Open the Circle, a nonprofit organization devoted to channeling financial resources into low-income communities through the arts. He has received awards and grants for his innovative work, including recognition as a “dancer of the year” in Dance Magazine, and artist grants from Chicago Dancemakers Forum, the Field Foundation, the Joyce Foundation, the New England Foundation for the Arts, and the Chicago Department of Cultural Affairs and Special Events.

Brandon “Chief Manny” Calhoun is a footwork dancer and filmmaker from the South Side of Chicago. Manny first rose to prominence as a dancer in the legendary Chicago battle clique known as “Terra Squad.” Manny co-founded The Era Footwork Crew in 2014. As a filmmaker, Manny’s shooting and editing has helped define the look and feel of The Era across over a dozen videos. His animation of footwork dancing was featured in the VICE documentary Meet The Era. Manny has footworked all over Chicago and the world, from New York City to Kuwait. As a lyricist and writer, his storytelling and rapping have graced several tracks by The Era, released on their critically lauded mixtapes. Alongside The Era, Manny was recognized as a choreographer of the year in 2014 by Chicago publication New City and cultural organizer of the year by FADER Magazine. Manny was featured alongside Towkio and Chance the Rapper in the video for “Clean Up.” He lives and works on the south side of Chicago.

Elisha “Eleelee” Chandler has been dancing since she was able to walk. A lifelong Chicagoan, Eleelee’s first dance group was Total Chaos. She later joined the esteemed footwork battle clique known as Terra Squad. In the male-dominated world of Chicago footwork, Eleelee broke through boundaries and earned her stripes in the circle along footwork’s pioneers like AG, Litebulb and Queen Crystal. Eleelee was featured in the short film “I am the Queen,” a tribute to the women of Chicago footwork with music from the artist Jlin.

Jemal “P-Top” De La Cruz: P-Top or “Legendary Top” as he’s known widely in Chicago, is an icon of footwork dancing. A bonafide “hometown hero,” P-Top represents the Uptown neighborhood on the north side of Chicago footwork. P-Top danced in the film Manglehorn with Al Pacino and has performed footwork across the world and in several countries. P-Top has also performed alongside Chance the Rapper. Before joining The Era, P-Top was affiliated with the dance group Goon Squad. Beyond dancing, P-Top has worked a multitude of jobs from crossing guard to caring for the elderly. He has four young sons, footwork dancers of the future. P-Top runs a regular footwork dance event in Chicago known as “The Ring,” which targets and empowers youth in low-income communities.

Diamond “Queen Diamond” Hardiman was born and raised on the West Side of Chicago. She has danced on a wide variety of stages, from the Museum of Contemporary Art to a concert with rapper Soulja Boy. Diamond’s approach to dance encompasses many styles, but she is especially known as a Chicago footworker. Diamond learned to footwork at age 11. By 13, she was popular across Chicago, winning footwork battles at venues like Warzone and on Wala Cam. Her dance videos have been seen over one million times online. In collaboration with House Arrest 2, Delta Phi Delta, and Open the Circle, Diamond has been pioneering a path forward for dancers and dance educators in Chicago. Her footwork shatters gender barriers in a historically male-dominated art form. Diamond has taught hundreds of young women how to footwork, and she was featured prominently in the 2018 short film I am the Queen. Diamond is now dancing and choreographing alongside The Era Footwork Crew in the show IN THE WURKZ.

Sterling “Steelo” Lofton is recognized among the top footwork dancers in the world. He came to prominence as a battle dancer in the legendary clique Terra Squad. In 2014, Steelo co-founded The Era Footwork Crew and began to tour internationally. He has danced at festivals such as Pitchfork and Lollapalooza. Steelo was recognized as a choreographer of the year (New City Magazine) and cultural organizer of the year (FADER Magazine) alongside The Era. Steelo is focused on the fashion side of dancing, helping to design merchandise and visual art to represent footwork and The Era. He created “footwork saves lives”, a campaign to help bring awareness to footwork as a positive outlet for youth in Chicago. Steelo recently started his own fashion line called “Stiched by Steelo.” He was awarded an honorary doctorate from South Shore High School for his community service through dance. Steelo’s rapping and lyricism has been featured on several mixtapes and he was interviewed in multiple documentaries from The Chicago Tribune to VICE. “Footworker’s boots,” a pair of Timberland boots customized by Steelo, was featured in The Era’s art gallery show at the Hokin Project in 2014. He lives and works on the east side of Chicago. 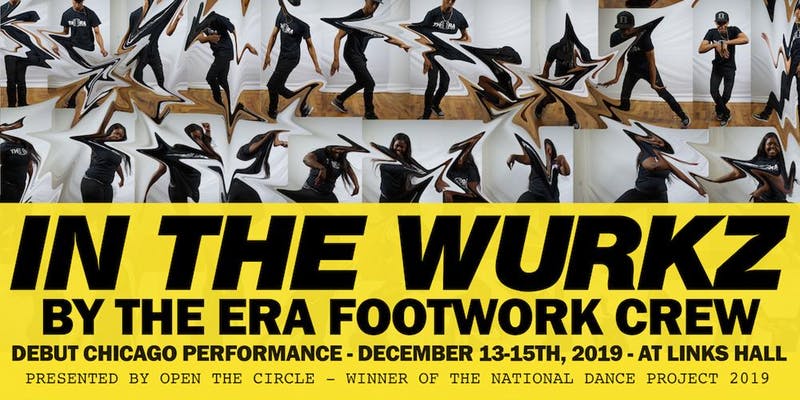