Revulsion in the Grocery Aisle: Explorations of Consumer Culture

Revulsion in the Grocery Aisle: Explorations of Consumer Culture

The supermarket is arguably the most “American” of inventions. One would be hard-pressed to find a more succinct representation of consumerist culture run amok than in the aisles of a nutritional wasteland. The very existence of a supermarket as mega-structure offers the mirage of easily accessible wealth, even as it disguises a sense of dissatisfaction and perhaps, disgust.

Revulsion in the Grocery Aisle is a program of short films from Chicago Film Archives’ vault inspired by the questions cleverly set forth in Kenji Kanesaka’s 1966 film Super Up.

A student film that was perhaps initially intended to be an elaborate joke, this stoner comedy fittingly sets a tone of both revulsion and defiance. Conceived by filmmaker Benoit while he was a student at the University of Iowa, the movie asks the question “Could you eat just a little bit of shit?” meaning, how much is one willing to swallow for a quick fix? Never has a vending machine or grocery aisle filled with heavily processed junk food looked more ominous than in this hilarious and slyly subversive film.

For 29 years Jerry Meyers screamed and yelled at the customers who came into his deli, and this documentary short directed by Tom Palazzolo attempts to explain why people keep coming back for more. Beneath his rough-and-tumble exterior, Jerry is surprising kind to his customers, who crave an intimacy that is hard to find in other spaces from which they need to purchase their food.

Set to the Beatles 1965 song “You Like Me Too Much,” Daytime Television consists of a series of close-up handheld pans of cleaning supply labels and packaging. Elam refuses to pull back and the abstracted visual effect is both dizzying, hypnotic, and full of rapidly flashing colors. The film looks at the feminist discourse of the “politics of housework,” and the anti-consumer sentiment baked into the counterculture of the day.

Kenji Kanesaka, one of the founding members of the “Film Independent” group and the Japan Filmmakers Co-op in Tokyo, was commissioned by Chicago producer Marv Gold to direct Super Up in 1965. The film is an exceptional and striking critique of structures of racial and class segregation, consumerism and lust, sexual energy and desire, and the domination of (and link between) advertising, consumption, sexuality, and the police. 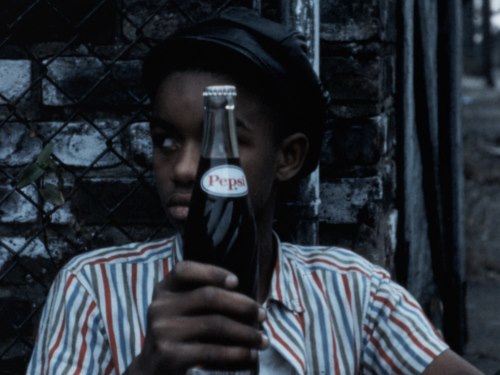