A monthly multidisciplinary Healing Art’s Immersion. Curated by Shannon Harris of Audio Pharmacology™/Urbanicity. “EVOLution” seeks to explore experimental variations in the healing art’s intermingling different modalities and cultural aesthetics in a inter-generational sacred space. Our mission is to engage audiences in unique ways via positive brain entrainment and multi-sensory expression. Join us for the final finale on December 8th for the Sono Geometry Experience featuring Shannon Harris, Rod Echols and Vandorn Hinnant.

ge·om·e·try
/jēˈämətrē/
the branch of mathematics concerned with the properties and relations of points, lines, surfaces, solids, and higher dimensional analogs.

Having a multifaceted career as an international DJ, musician, composer, label owner, videographer, Qi Gong instructor, speaker, humanitarian, pro-activist, healer, and Audio Pharmacologist™, Shannon has managed to explore obscure territories, regions, genres, sciences, styles and traditions through his work in the Healing Art’s. His journey within the fields of art, science, therapy and music spans over 3 decades, 6 continents and numerous cultural and spiritual traditions. Shannon has been initiated into many traditional indigenous healing art modalities since 2003. In 2012 he developed a unique vibrational massage technique using photonic light, heat, custom brain entrainment, physical body & energy resonance along with Qi Gong healing. Since 2016, his main focus has been on developing/instructing his unique style of Audio Pharmacology™ Spiraling Serpent Medical Qi Gong at festival, conferences, centers, schools and health & wellness fairs internationally along with treating clients with his sound, light, and heat therapy protocol.

In 2018, he was invited to study the art of Bhakti Yoga privately under the great BV Ashram Maharaj in India where he became a resident instructor at the Golden Avatar Academy. In 2017, Shannon received an invitation to privately study the art of Hungry Monk Yoga under a 34th Generation Shaolin warrior, Shifu Wang Bo in Canada. He has taught different forms of Qi Gong, yoga, meditation, sound sciences and therapy internationally in Brazil, Canada, Kenya, India, and London along with traveling monthly all over the USA. In 2018, he was selected to present the first QI Gong class at the biggest North American health festival, BOLD Conference, in San Diego. Shannon treats clients at centers all over the Chicago-land area and travels monthly to Seattle and LA treating clients on the West coast. He also instructs Audio Pharmacology™ workshops in schools around Chicago, Harvey Illinois, Summit Illinois and current at the University of Chicago Gray and Logan Centers. In 2019 his Audio Pharmacology™ research was featured in the University of Chicago’s Gray Center Portable Gray magazine entitled “Noise Nomads”.

Rod Echols has been involved in some aspect of music for over 40 years. Starting as a bass player in St. Louis. Later becoming a roadie/stage technician for the World Renowned Art Ensemble of Chicago over a 15 year period. Rod has also worked in Jazz Radio at KWUR @ Wash U. and WHPK @ U of C as Jazz Director. And in recent years Rod earned a Sound Therapy Certification from Globe Institute of Sound in San Francisco.

Rod offers Sound Therapy to help clients in his current home of Chapel Hill, NC and here in Chicago.

Rod is also an inventor and innovator and for this experience, the challenge is to provide an experience in Sound, Shape, Color and Vibration Experience that will promote Healing to all that come.

Vandorn Hinnant grew up in the Old Asheboro neighborhood in Greensboro, North Carolina. He received a Bachelor of Art’s degree from North Carolina A&T University and studied visual arts at A&T State University and UNC -Greensboro. Many of Hinnant’s works explore mandalas; a visual spiritual and ritual symbol in Hinduism and Buddhism representing wholeness in the universe. He uses circles, lines, angles, polyhedrons, and color to explore mandalas in his drawings, paintings and sculpture which are often installed together.

In 1988, Vandorn exhibited work at Duke University’s Institute for the Arts based on the 13th century Fibonacci numbers and Lucas Pacioli’s treatise. He began studying Sacred Geometry formally in 1989 with inventor and physicist Robert L. Powell, Sr. Since the late 1980’s he introduced fractal mathematics, the Golden Ratio, the Logarithmic Spiral, Sacred Geometry and most currently STEAM concepts into his work to explore metaphysical ideas. The ancient architectures in Egypt, India, Rome and Greece that use these concepts were original influences for him to unpack “pre-material templates of energies,” he states. Hinnant has also referenced Buckminster Fuller, Leonardo da Vinci, and M.C. Escher as inspirations because of their use of geometry and math in their work. Part of his objective is to catalyze dialogues through and around his work connecting these concepts to human relationships and encouraging education around the golden proportion. 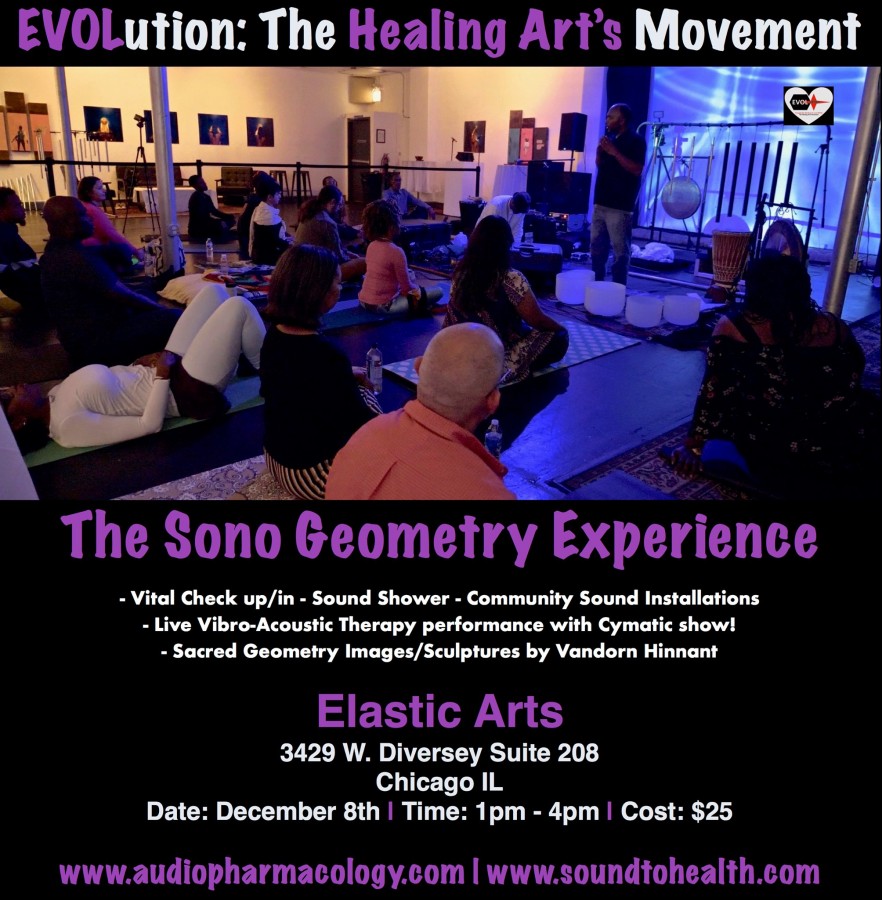