In the performance O N E composed of three chapters, the director of Defibrillator Gallery, Joseph Ravens, plays the role of an auctioneer while Marie-Caroline Hominal plays the role of an artist. Hominal falls on boxes, sells her own performances, and talks with Ravens and the audience. Through gestures, Hominal conjures an absurd auction to reflect and question the commodification of performance. Interrogating what and how everything can be sold and bought, Hominal examines notions of authorship, identity, and the art market. Commenting on cultural consumerism and capitalists systems, ONE incorporates the curator directly into the performance – objectifying and laying bare the role of the artist in relationship to the presenter. Direction, concept + performance by Marie-Caroline Hominal.

Marie-Caroline Hominal [www.madmoisellemch.com] received her dance education at Schweizerische Ballettberufschule in Zurich and at Rambert School of Ballet and Contemporary Dance in London, where she joined the National Youth Dance Company. Her practice includes choreography, performance, video, drawing, music. She has developed miniature one-to-one performances such as Le Triomphe de la Renommée (2013), The Last Dance (2015), Ballet Solo (2018) as well as full length performances: Patricia Poses by the Pop Machine (2011), Ballet (2014), Taxi-Dancers (2016), Grrrrrrrrrrrr (2018). She also created the one-woman orchestra performance Silver (2013) and the artisanal radio show Where’s the MC (2015). She is currently working on the notion of authorship with the series Hominal/xxx. She invited the Swedish stage director Markus Öhrn, Hominal/Öhrn (2018) and then, the South-African choreographer Nelisiwe Xaba, Hominal/Xaba (2019). She has collaborated with the electronic musicians Clive Jenkins, Cristian Vogel, visual artists Kim Boninsegni, David Hominal, Delphine Coindet and co-created Duchesses (2009) with François Chaignaud. As a dancer, she has worked with Irène Tassembedo, Blanca Li, Gisèle Vienne, Gilles Jobin, La Ribot and Marco Berrettini (with whom she co-signed the duo Ifeel2). Since 2008, her work has been presented in both theaters, museums, and galleries in Europe, China, South America, and the USA.

Defibrillator Gallery [www.DFBRL8R.org] is an international platform for Performance Art known for bold and courageous programming. Actively contributing to a global dialog surrounding conceptual, ephemeral, or enigmatic modes of expression, DFBRL8R aims to raise awareness, appreciation, and respect for the discipline of Performance Art. Based at Zhou B Art Center, a privately funded complex founded in 2004 by the Zhou Brothers in Chicago’s historic Bridgeport neighborhood, Defibrillator is a 501c3 organization made possible with support from The Tanne Foundation Award; Reva and David Logan Foundation; Elizabeth Morse Genius Charitable Trust; Martha Strutters Farley and Donald C. Farley, Jr. Family Foundation; Zhou B Art Center; DFBRL8R Board of Directors; and generous contributions from our loving community. 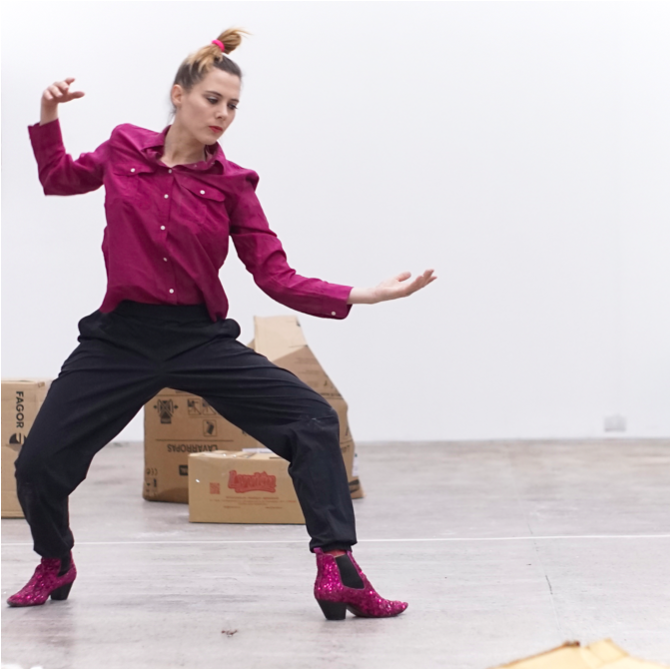