Ionit Behar (Ph.D candidate in Art History at the University of Illinois at Chicago) joins Professor Daniel R. Quiles in a conversation about the rise of feminism-driven inquiries in Latin American Art History since the exhibition “Radical Women” (2017) at the Hammer Museum in Los Angeles. Despite that Latin America did not have a feminist movement (with the exception of Mexico), there has been an increase in research, exhibitions, and writing on Latin American women artists from a feminist perspective. Behar’s dissertation – titled “Intimate Space and the Public Sphere: Margarita Paksa in Argentina’s Military Dictatorship”- discusses Paksa’s work from the 1960s to 1980s, which was prominently featured in “Radical Women” and has received considerably more attention since then, after being underrecognized for decades.

Mapping the Field is the Department of Art History, Theory & Criticism’s inaugural conversation series focused on bringing together a variety of emerging scholars to discuss their work with a faculty member or graduate student. In the spirit of critical discussion and reflection, Mapping the Field creates opportunity for new perspectives to emerge and interests to catalyze across the discipline. Lunch will be provided. 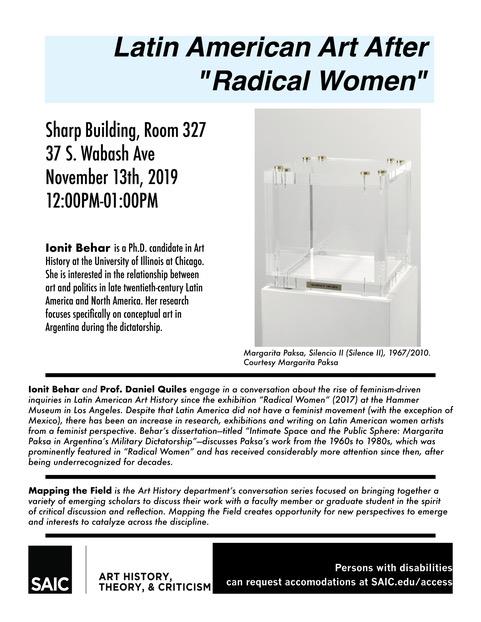