On view through Wednesday, November 27th

The primary purpose of this show is pedagogical in nature. It was definitely conceived as a teaching show. Contemporary new media and the role it plays for across contemporary art in Chicago is the subject. New media is pigeonholed into the categories of fabrication or display. Each of the participating artists not only utilizes new technology in surprising physical ways, but also leverage it within their individual conceptual frameworks. As you may find by reading the artist’s own words below, the role of technology in art goes beyond gears and screens.
-Ali Seradge

“My art explores the potential of using digital media as the conceptual generator and as a production method. I write software that generates images and sculpture. I write software that explores multiple series of a single concept or idea. The software enables me to express and produce any idea I wish. It helps me to better understand the underlying concepts of my work, as well as, produce exceedingly unexpected results. As with conceptual artists such as Sol LeWitt, the concept, in my case expressed in the software, becomes primary; the results are an interesting byproduct.”
“My art work is computationally generated, custom developed software; a method which can express a consistency of a developing a concept and enable a variety that focuses on the idea and its variations. Then the digital model is 3D printed in sandstone or Alumide, a metallic plastic.”

‘These images are created by performing a Google image search of a word (e.g. “gun”, “fear”, “god”, etc.), taking screenshots of each of the top 10-25 images returned from Google, and then using those images to create a composite image of the concept of the searched word. The actual images are created by building a statistical model for the color of each pixel as a function of all the other pixels, and then predicting a color for the final image based on all the search images.’

“The majority of my painting process is spent covering the canvas with pieces of adhesive masking vinyl. I digitally design geometric shapes, which are cut with a vinyl plotter. Once the sheets of masking vinyl are cut into various shapes, I work by hand to arrange the vinyl on the canvas.

Because the hand is most apparent in my finished paintings, my work is not often situated with new media. However, I see my process as relating to new media work that deal with glitch. I embrace glitches and inconsistencies that occur during the somewhat formulaic system of masking off designs. I intentionally misalign the arcs in the circles, and I work with varying sizes of grids in order to increase the amount of abstraction that happens to the shapes. Even my most frenetic compositions are based on a grid. The grid represents a rational system, which I use as a foundation and then work to obliterate. Circular designs overlap in multiple layers and colors, creating a kaleidoscopic composition.”

“A Study in Rhyme & Song: Easy Listening, by Sadie Woods, surveys notions of social terrorism through the lens of children’s rhyme Ten Little Indians offering a critical perspective on notions of progress and living in a post-racial nation.

Originally written and performed as a minstrel show tune in the late 19th to mid 20th centuries, this song was heard internationally through minstrel circuits from America to Europe. Written by Septimus Winner, the song celebrates the violent deaths of little Black and Native American children. Due to its popularity, this song was later repurposed for entertainment and educational tools from film and animation to games and toys, from novels and children’s books to musical theater. Today, you will find adaptations celebrated as a nursery rhyme used to teach counting skills and English as a second language. A Study in Rhyme & Song: Easy Listening showcases a series of hacked Fisher Price toy record players and custom 3D printed toy records that play chopped loops deconstructing Ten Little Indians, exploring colonial nostalgia and the legacy of children’s nursery rhymes.”

Sarah Leuchtner
‘The work relates to contemporary culture and new media, in that it gives insight into the “making” process in the studio and the output of the media consumption. The exploration of “guilty pleasure” and how that subconsciously inserts itself into my sculptures and paintings, is an important part of my process. Sometimes showing itself in a pixelated form or a recognizable emoji, I make work while being an artist in the digital age, and reflect on this as part of my practice. I use media as a form of tourism, and investigate that as an ongoing theme.’

“S/S 2029:
The collection speculates the future relationship between fashion and augmented reality without a focus on anxiety or moral assessment. It highlights the death of a myth about the pursuit of beauty as a gendered, unintellectual and idle pastime in favor of a new understanding of it as a tool of political, social and economic power.

This is explored through the design of the wearables themselves as well as live and photographic collaborations with drag performers and queer beauty professionals, who are able to endear queer cultures to larger society because of their skill with beauty. The finished work consists of wearable sculptures that exist in both physical and digital space and fashion images of them being worn. I’ve observed the transformative effect it has on the people involved in the process: highlighting the mutability of identity and making plain the path between my collaborators’ daily selves and otherworldly, digital versions of themselves. This has led me to seek ways to incorporate viewers more into the experience of the work, rather than simply seeing images of performers as part of a separate community. The result is the use of augmented reality effects, or filters, enabling viewers to participate in a transformation themselves.”

“I am an artist whose practice uses multidisciplinary approaches to interrogate the relationship between competition and intimacy. I often integrate novel technologies and unexpected material forms to conjoin viewers within immersive sculptural installations and viewer- inclusive performances. My work imagines new and alternative forms of social behaviors and relationships.

[In “Wishing Well,”] participants are conjoined in a hinged wooden sculpture through which they enter a virtual world where they collaborate to make wishes in a well. The work explores the emergent behaviors and embodied knowledge that responds to haptic feedback of connected person. The seemingly intimate experience is confronted by the impenetrability of the subjective experience. The two users in fact cannot see each other’s virtual point of view and yet work together to make collaborative decisions as if they can.”

‘My work is often inspired by graffiti culture, Mexican heritage and art history. I’m interested in taking inspiration from “low art” or “lowbrow” culture such as graffiti and creating works presented as high art.’‘The series of drawings could not have been made without the use of new media technology. Photoshop has served as an instrumental tool in creating these drawings. While the original drawing was made with ink on mylar, the final series live digitally on my website. The original drawing is no longer important in this series but rather the variation in images created digitally with a physical small drawing being the inspiration for the series.’

Yvonne Martinez
“My practice is a collaboration between materials, machine, and an audience. Using the limitations of outdated technology and the unpredictability of crowdsourcing to guide my hand, the knitted structures I create take on a life of their own as they are made. Removing barriers between the audience and the output excites me. The body becomes a tool in the process, and it moves as directed by others. As a result I am able to play with my agency in various textile processes and investigate how these rigid media can become fluid and surprising.”

“Even though some of the tools used to create the work are outdated, the imagery submitted is representative of the current culture, both online and off. Much like how we become content creators using the devices we carry with us, anyone can author their own designs and collaborate with me on this knitting project. Since I live stream my work online, the final pieces are physical translations of a digital experience, a record of a performance.

“If you’d like to submit, please go to http://yvonnemart.com/puncher (please use a computer for this instead of a mobile device)

“The work defines the satirical problematic of humans designing robots and designing clothes for said robots. Therein, training a human to “design-like-a-robot.”

In an effort to define the choices of the robot, the human shows its intentionality in the questions being asked to (and not for) the robot. Thus, the flaw continues to rear its inherent negligence.” 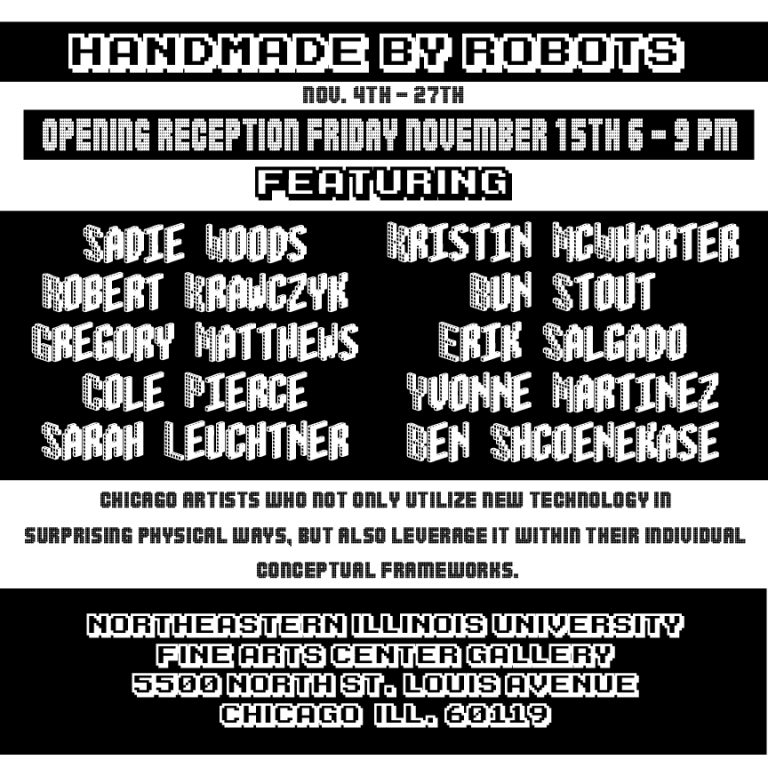