In 2016, artist Bernard Williams inherited a small amount of money from an uncle based in Montgomery, Alabama. A bittersweet form of reparations, the sum was one part of a $1.2 billion settlement against the U.S. Department of Agriculture in the Pigford v. Glickman class action lawsuit. Colloquially known as The Black Farmers Settlement, the funds were distributed among approximately 13,000 African-American families with proven connections to farmers who were summarily dispossessed of land and farming opportunities from 1981–1996. Although it is not widely known, The Black Farmers Settlement is the largest civil rights settlement to date and has lead to several resulting class action lawsuits on behalf of other groups of farmers similarly discriminated against by the USDA in the distribution of farm loans and assistance.

At The Arts Club, Williams installs a black fabricated tractor as an homage to the strength, power, and labor of those families. The tractor is both a symbol and a monument, to Williams: it honors a very specific history of farmers who have experienced dispossession at the hands of the United States Department of Agriculture and its subsidiaries, while also signifying the broader struggle between America’s marginalized populations and their government, particularly in the fraught timelines of American labor and agricultural history. He combines this monument with graphic forms that refer more obliquely to site, theme, and history.

Throughout his oeuvre, Williams draws upon narratives that may expand otherwise flattened stories of struggle and invention in America. His sculptures and performances often begin in the archive, reconstructing lost narratives and refracting them through their contemporary cultural expressions.

Please join us for an opening on November 16th.

Bernard Williams is a native of Chicago, Illinois. He holds a BFA degree from the University of Illinois at Champaign-Urbana and a Master of Fine Arts degree from Northwestern University in Evanston. He also studied at the Skowhegan School of Painting and Sculpture, Maine, 1987. Williams has been teaching art at the School of the Art Institute of Chicago since 1991. 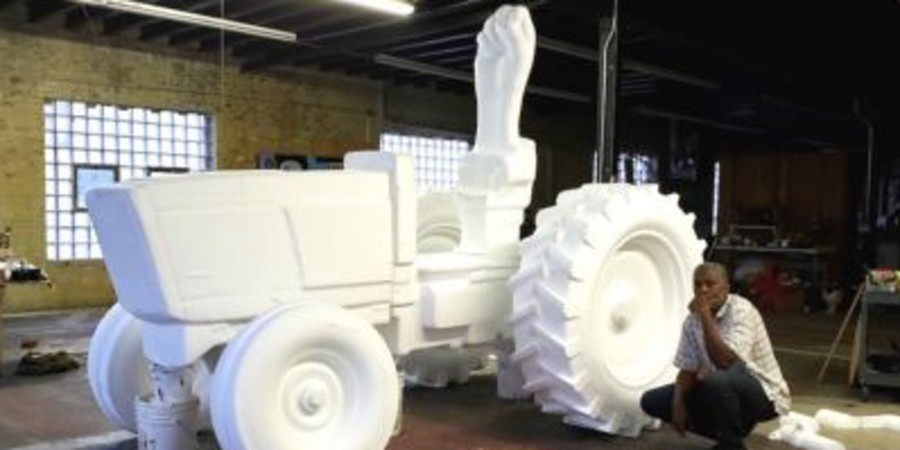