M. LeBlanc is proud to present Method Of Error, an exhibition of collage works by Andy Hope 1930.

Renowned for his painting, installation/sculpture, collage, and film, Hope’s expansive approach to art making draws from a critical interest in irritating and destabilizing current narratives, especially those symbols, signs, institutions, corporations, and instruments of power occurring in the American pop/pulp literature, comics, and cinema alike. However, for its intimacy and gravity of narrative, collage continues to be most integral to his practice. The exhibition brings together a selection of works from over the past decade, assembled primarily from Hope’s collection of American comic books and assorted historical source material. The works detail not only the evolution of Hope’s growing body of collage work, but also a key point of entry to the entirety of his practice – the heroic gesture as it relates to the deconstruction of power in the 21st century. Hope’s subjects – undead, strange, ghost-like husks of being – ‘industrious surrogates’ (John C. Welchman) are the last figureheads for systems of power. These inquiries cause us to reflect on the shared narratives of power between the source material, but further to germinate questions regarding the nature of political renewal and the role of ego in shaping it. Hope’s works dismantle time and define it anew, effecting an examination of how and by who history is told. Weakened and decayed, they each note a collapse in the rule of law, the disposal of truth, and the erosion of the heroic myth. 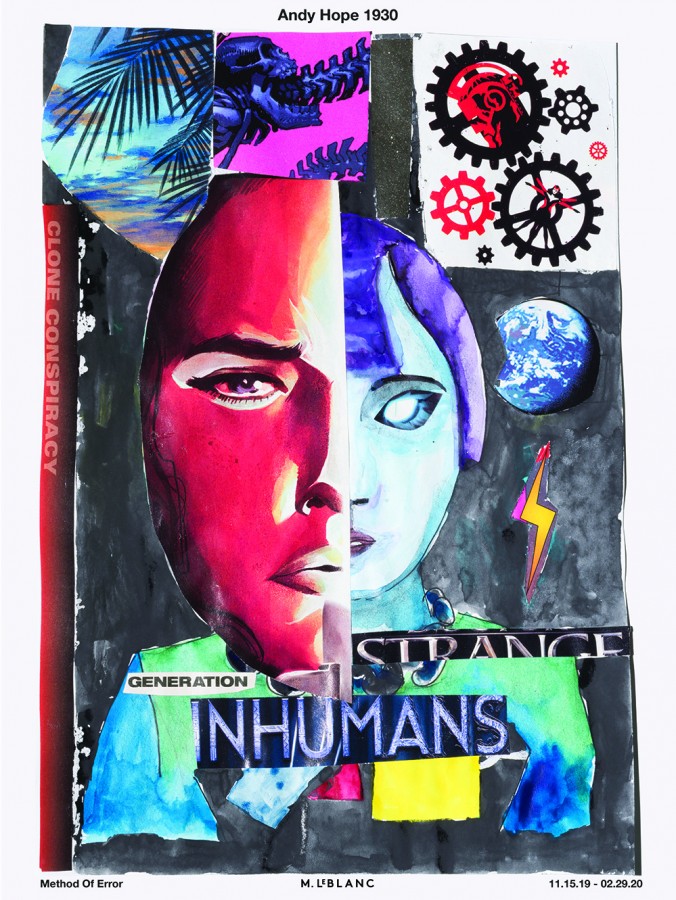