We Are Witnesses: Chicago: (In)Justice for All Film Festival

We Are Witnesses: Chicago- (In)Justice for All Film Festival

Part of the (In)Justice for All Film Festival

WE ARE WITNESSES: CHICAGO* is an immersive short-video series presenting intimate portraits of Chicagoans who have been touched by the criminal justice system. Produced by The Marshall Project in partnership with Kartemquin Films and Illinois Humanities, these films explore the nature of crime, punishment and forgiveness.
https://www.themarshallproject.org/we-are-witnesses/chicago

Peter Kuttner is a Chicago filmmaker, activist, and cameraman. He is known for his early socially-conscious documentary films that touch on topics such as opposition to United States involvement in the Vietnam War, gentrification of Chicago, racism, and social class.

Larry Redmond is an attorney, writer and photographer.. He has worked as a criminal defense attorney representing high-profile death row inmates, several of whom were released pursuant to DNA testing. He is a member of the National Lawyers Guild. He is general counsel for the Chicago Alliance Against Racist and Political Repression

In this socio-politically charged moment when scientists warn us that we have at best 10 years to enact measures to curb CO2 emissions to limit the worse effects of climate change, at a time when nationalism and white supremacy define our politics resulting in policies that separate children from their parents at our southern border, when black and brown bodies are victims of state violence, at a time when we identify ourselves at the most advanced civilization in the world while leading the world in the percentage of the population incarcerated and at a time of nonstop wars (the U.S. has been at war 222 out of 243 years since its founding), this is a time that demands an informed citizenry motivated to help the arc of the moral universe bend a little faster towards justice.

This is a time that demands we be present now. The posters included in this show speak to the urgency of the moment.

Chip Thomas, aka “jetsonorama” is a photographer, public artist, activist and physician who has been working between Monument Valley and The Grand Canyon on the Navajo nation since 1987. There, he coordinates the Painted Desert Project – a community building project which manifests as a constellation of murals across the Navajo Nation painted by artists from all over the rez + the world. These murals aim to reflect love and appreciation of the rich history shared by the Navajo people back to Navajo people. As a member of the Justseeds Artists Co-operative he appreciates the opportunity to be part of a community of like-minded, socially engaged artists. You can find his large scale photographs pasted on the roadside, on the sides of houses in the northern Arizona desert, on the graphics of the Peoples Climate March, climateprints org, Justseeds and 350.orgcarbon emissions campaign material. 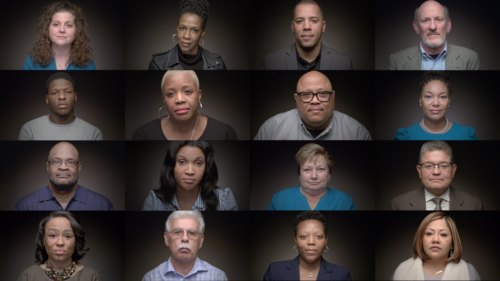