Pictures of an Exhibition: A symphony of sight, sound, taste and scent

In The Realm Of Senses pairs classical masterworks with art, gastronomy, and custom scents for a combined experience that takes the perception and pleasure to new heights. Held on October 4th, 2019 at 7:30 pm at Chicago’s Ukrainian Institute of Modern Art, the event will feature the music of Modest Mussorgsky’s “Pictures at an Exhibition” paired with visual art and animated video inspired by the music, scents sculptures by master perfumer Christophe Laudamiel, and gastronomic creations by select Chicago chefs such as Band of Bohemia, Mango Pickle, Chocolat Uzma, Hewn Bakery, as well as libations from Maplewood Brewery.

“We create a new connection between music and the other four senses in a harmonious way you’ve never experienced before,” says In the Realm of Senses creator and curator Jeff Yang. “The whole is greater than the sum of its parts.”

Pictures at an Exhibition was written by Mussorgsky in 1874 for solo piano, and orchestrated by Maurice Ravel in 1922. The evening’s arrangement has been condensed for two players with Jeff Yang on violin, viola, cello, four baroque recorders, and Lyudmila Lakisova on piano. Taste experiences will include puri-pops from Mango Pickle, a yuzu tart from Band of Bohemia, brownies from Hewn Bread, and a dark chocolate truffle from Chocolate Uzma. Two scent sculptures “Whisky Tobacco Cabaret” and “Tree of Life” created for the piece by master perfumer Christophe Laudamiel will create a one-of-a-kind aromatic experience. Live video animation by Chicago-based multimedia artist Galina Shevchenko will be paired to the performance using original lithographs by John Gaudette based on the music.

The first half of the program will introduce a Slavic theme with rarely heard pieces by famous Ukrainian-born composers, Sergei Borkiewiecz, Sergei Prokofiev, and Myroslav Skoryk. Also being displayed are original lithographs by John Gaudette, an homage to the lost paintings of Viktor Hartmann of which Mussorgsky’s Pictures of an Exhibition is based.

Beer from the Maplewood Brewery, Band of Bohemia, and wine are included in admission.Members of the media are particularly invited to attend and a limited number of complimentary tickets are available. 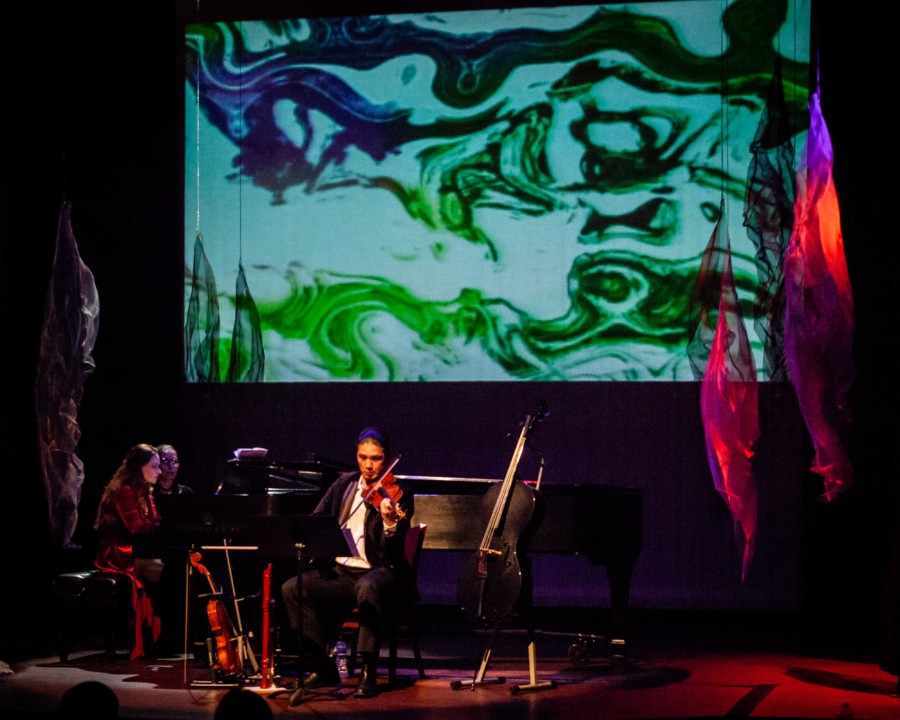