Epic. Diving into the reservoir that is the source of the word. Godlike and god’s favorite son. The work he was sent to do. John Henley returns to Slow to feature two new bodies of work in his 3rd solo show with the gallery. He’s now using the vocabulary that built the classics. Monumental. John has paired down in a way (I know that there is a paradox in scaling up to monumental while pairing down). Graphite and a few prisma colors. The sort of drawing that begins so many of our drawing journeys. Digging deep into the history that led him to all the places he’s gone. Referring to classical moments in visual history as much as the stories they were meant to visualize. He’s made a suite of drawings that explore the tasks given to Hercules. They are neither naturalistic nor Modernist simplifications. The scenes are housed in referential architecture like School of Athens.

John has long looked at men engaged in daunting labor. The themes are building off the previous work, but the delivery is strikingly different. There has always been tension between the fortitude of labor, and the sexified thing that happens to so many of us gawking at the body that labor sculpts. The fetishization of anything heroic. The desire to access a sort of masculine that is encompassing and powerful but not at all toxic. The masculine energy we welcome into our lives and into our bodies. The ways that all that only comes with the rest of life that encompasses us in how ordinary it is.

As if these drawings were not enough, John made an entirely different body of work. Modest paintings on panels. The other way of viewing labor. Longsuffering. Silent. Unacknowledged. Tasks that must be done, but never celebrated for completion. Practically the moment it is done, it is already time to set about the next iteration. In this case, a meditation on the daily task of preparing sandwiches for his lunch and his partner’s. He told me he was driven to paint them because the new drawings were emptied of color, from the sense of touch that comes with fat slippery paint. There is power in the limited palette and simple material, but there is also power in lusciousness. While the paintings are slippery and colorful, the job done is spare. Hercules set out to accomplish the monumental and valorized. Sandwich making hardly even counts as work, skill, care, or accomplishment. The epic drawings show draftsmanship. The sandwich paintings show a different, simpler kind of thing. The work coming from the same artist at the time is a wonder that simply must be taken in. 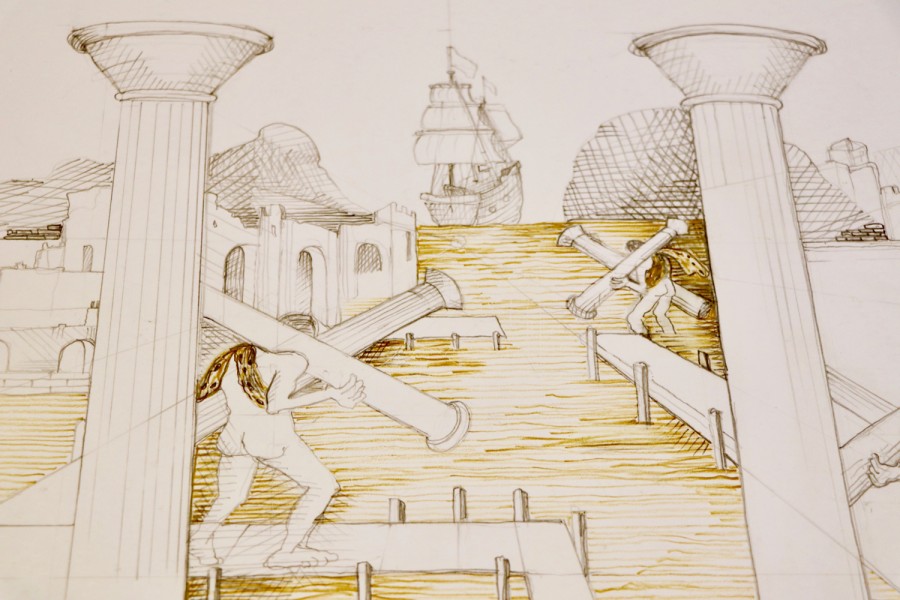