Jacqueline Surdell’s latest solo exhibition, Vaulted Breath/Winded Spirit, draws upon the tradition of storytelling as it forms personal histories and subsequent understandings of self. Through seemingly disparate objects, Surdell re-tells the tale of the first irreverent woman as “She” explains her complex journey through time. Strange, grotesque forms exist as monuments to the inexplicable — creating confusion and a sense of the unknown. Mythical masks protect the wearer and explosions of light and dark represent “Her” struggles in a world that is impossible to understand. It is here Surdell manifests architectural realms that slip between the known past and unknown futures.

Jacqueline Surdell is an artist living and working in Chicago. From childhood through college Surdell was a competitive athlete, accustomed to pushing the limits of physical endurance. She approaches her studio practice with the same disciplined resolve. Pulling from a wide variety of influences, Surdell’s large-scale installations draw attention to the tools and environments containing and displaying performances of power and skill, questioning the boundary between the human body and sculpture — challenging the internalized and gendered rules we use to give each meaning.

Surdell received her MFA in Fiber and Material Studies from the School of the Art Institute of Chicago in 2017. In 2015 she received her BFA from Occidental College, Los Angeles, CA. 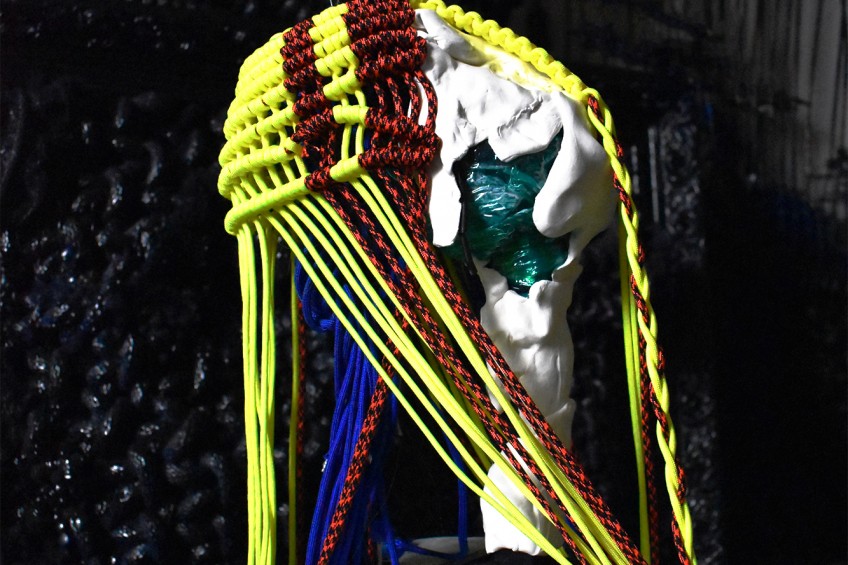