In The Realm Of Senses: Beethoven 250 Part I: Band of Bohemia

Experience an incredible symphony for the senses this October 28th at Michelin-starred restaurant Band of Bohemia for an early celebration of Beethoven’s 250th birthday featuring the music of Beethoven’s middle period paired with a unique six-course meal and special wine pairings designed by Michael Carroll and created by executive chef, Soo Ahn. This evening will be the first of its kind to combine fine dining with incredible music by top Chicago musicians as well as scent sculptures, art displays, and literature by Leo Tolstoy. It is truly a night not to be missed!

This show will be the first installment of In The Realm Of Senses’s Beethoven 250th birthday celebration that will be happening all year round in Chicago as well select locations in the US and Canada. The first half will feature Beethoven’s violin sonata No.9 “Kreutzer”. ITROS creator Jeff Yang will be performing this work on a violin from 1750 set up with gut strings and classical bow, with the enigmatic David Schrader on fortepiano, a piano used during Beethoven’s time. You will experience Beethoven as it was heard in the 1800’s in this rare realization of this incredible work. Also paired with this will be excerpts read from Leo Tolstoy’s short story “Kreutzer Sonata”, which is titled after this work by Beethoven. Band of Bohemia will create a procession of food and scents as well as appetizers and small bites to pair with this work. A special scent sculpture by master perfumer Christophe Laudamiel will encapsulate the scent of “Beethoven”.

The second half will be visual, culinary, and sonic tour de force with a sensory performance of Beethoven’s string quartet Op.59 No.2 “Razumovsky” featuring Yang and Mathias Tacke (of Vermeer quartet) on violins, Sixto Franco (of Fifth House Ensemble) on viola, and Nick Photinos (of grammy winning Eighth Blackbird) on cello. This work will be paired with original projected video art, readings from Tolstoy’s short story, paired with fish, braised rabbit, wild boar, and wines paired to the gastronomic creations.

Also on display will be the unique instruments played in this concert, including a 1750’s violin by Juan Guillami of Barcelona, a fine modern violin by Kelvin Scott adorned with latin quotes, a classical violin bow by Harry Grabenstein, and a fortepiano modeled after Beethoven’s own instrument from 1800’s.

Come and take a step back in time and two leaps forward and experience something that is truly unique, a fantastic symphony for the senses! 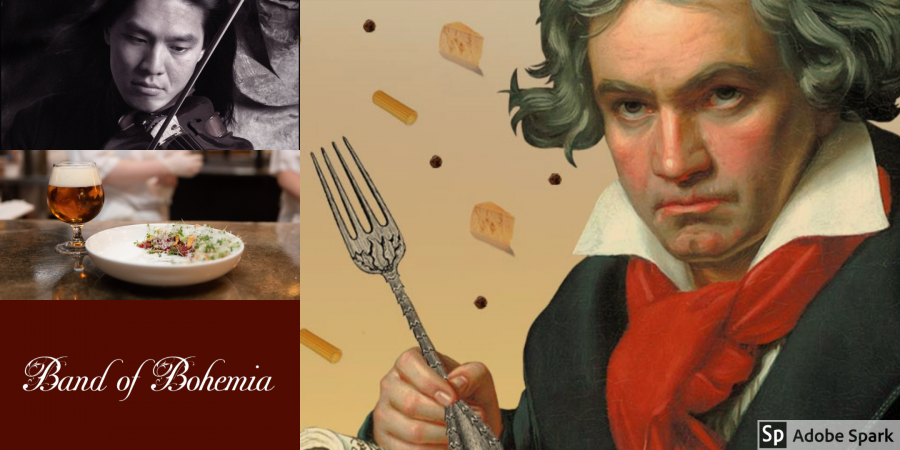