The Underworld of Sensory Derangement

The Underworld of Sensory Derangement is a 16mm-film program that includes six independently produced films from 1960s: Maya Deren’s “The Very Eye of Night,” Jud Yalkut’s “Le Parc,” Aldo Tambellini’s “Black Is,” Storm De Hirsch’s “Peyote Queen,” Yoichi Takabayashi’s “Musashino,” and Marie Menken’s “Hurry! Hurry!.” Much of this program appeared at The Gate Theater together in the October 1966 program Psychedelia Tune In.

Maya Deren’s “The Very Eye of Night” (1958, 16 min) was Maya Deren’s last film. In black and white reverse print, this film features ethereal dancers who seem to emerge from and enliven the night sky’s constellations. The film includes choreography by Antony Tudor, special effects in collaboration with Marie Menken, and a musical score by Teiji Ito.

Jud Yalkut’s “Le Parc” (1966, 4 min) is a color film that features kinetic sculptures by the Argentinian artist Julio Le Parc that were exhibited at Howard Wise Gallery earlier that year. Jud Yalkut’s mesmerizing film never reveals the artworks nor the exhibition as a whole, but rather concentrates on expressive bursts of light and reflections of color escaping from form. The film is accompanied by an electronic score.

Aldo Tambellini’s “Black Is” (1965, 4 min) is a black and white film with sound, described in the Grove Press Film Catalog as follows: “The sound of a heartbeat and made entirely without the use of a camera, this film projects abstract forms and illuminations on a night-black background and suggests, says Tambellini, ‘seed black, seed black, sperm black, sperm black.’ ”

Storm De Hirsch’s “Peyote Queen” (1965, 9 min) is a hand-painted color film that features her scratched and processed film mixed with “live action: of abstract images, such as seen through refracted glass, and sounds provided by a ‘Haitian Voodoo Drum Ritual and Electronic Organ Rock ‘N Roll’ “ that provide steady, rapid, and complex rhythms throughout the film. Every art school film student has seen the digital transfer of this film, but to see the colors of the archival film in person is a magical experience to savor.

Yoichi Takabayashi’s “Musashino” (1965, 15 min) is a black and white film with sound that takes place in the woods of the legendary Musashino Plain, located on the outskirts of Tokyo. Originally part of The Gate Theater’s Erotica Neurotica program, its eroticism is not explicit, but rather suggestive—a scopophilia or love of watching, of peeking, of lingering and observing both the woman in her affection for the woods and the evocative landscape.

Marie Menken’s “Hurry! Hurry!” (1957, 3 min) is a color film with sound described by Catrina Neiman as “composed of just three elements: sperm cells (so large that one fills the whole frame) struggling to reach an egg and dying one by one, to the sound of bombs exploding, and the whole piteous contest is viewed through the slowly pulsating flame of a candle.”

The Underworld of Sensory Derangement is part of THE GATE THEATER FILM FESTIVAL 1966/2019, a week-long, 16mm-film festival that is taking place Tuesday, September 24, through Monday, September 30, from 7 to 9 pm at filmfront. 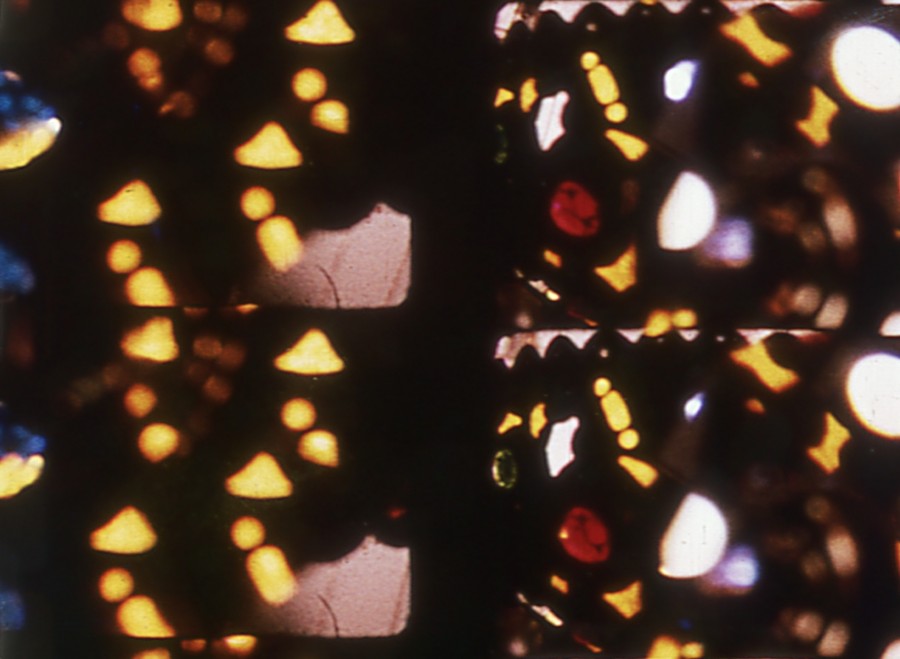