The one and only Super Sucklord, Famous New York Pop-Artist and Chinatown Supervillain, is gracing Chicago’s Logan Square neighborhood with his dubious presence for one action-packed day of bootleg toys, hip-hop, and refined conversation.

The Sucklord will be making three separate appearances in the afternoon and evening of Saturday, September 21st. All events are completely FREE! Attendance is mandatory / space is limited. Arrive on time.

2:30 PM – 4:30 PM: The day begins with an enlightening Suckadelic Lecture at Galerie F. In a seated presentation, The Sucklord will give the latest version of his infamous “Artist Talk”: ART ACTIVATION and SELF ACTUALIZATION Thru the CREATIVE APPLICATION of CUSTOM BOOTLEG ACTION FIGURES. Many mysteries are expected to be revealed. The SUCKADELIC OLD STYLE Exclusive Event poster created by the artist will be available during this engagement at Galerie F. Limited Seating.

5:00 PM – 7:00 PM: EXCLUSIVE FIGURE RELEASE and RETROSPECTIVE Show at Toy de Jour. For a very limited time, the SUCKLORD 68: OLD STYLE Bootleg Figure will be available at this event. The Sucklord will be on hand to sign pieces and take photos. A small retrospective of recent SUCKADELIC INVESTIGATIONS framed works will also be on display and available to purchase. Supplies are Limited! Get there on Time!

8:00 PM till close @ Logan Arcade: After party and Mixtape Release. The Sucklord holds court and brings out Chicago’s own Tewz Rock to spin dusted beats and keep things moving. A friendship forged on Reality TV (Bravo TV’s WORK of ART: The NEXT GREAT ARTIST Season 2) The Sucklord and Tewz will release their Chicago-Themed Cassette tape The Same OLD STYLE only at this event. Expect special Suckadelic drink specials and (maybe) some one-a-kind event promo materials you can add to your collection. This is your chance to worship The Sucklord once again, congratulate him on an evil scheme well done, and convince him to keep on coming back to our great city. Event is 21 and over. (sorry kids)

This Suckadelic Spectacle is brought to you by the fine folks at Collecticon Toys, Toy de Jour, Galerie F, and Logan Arcade.

The Sucklord is a New York City Pop Artist and Television Personality known for his subversive Action Figure mashups and Supervillain aesthetic. Operating out of Chinatown NYC under the Brand SUCKADELIC, The Sucklord’s Line of self-manufactured Bootleg Toys steal shamelessly from STAR WARS, Vintage Advertising and All manner of Pop Culture Trash. Packaged in layers of ironic self-Mockery, His shoddy looking wares have inspired an entire secondary Art movement, with dozens of entrepreneurial Toy Bootleggers creating their own versions of highly referential, low-Rent interpretations of their favorite figures. The Sucklord has appeared on Several Reality TV programs such As BRAVO’S Work of Art: The Next Great Artist and The Dating Game; using those venues as an opportunity to create spectacular pieces of Live Performance Art. An extensive YouTube library includes several hours of material ranging from fuzzy Toy Commercials, The SUCKHOUR Talk/ interview show, and the ongoing Toy-sploitation movie serial TOY LORDS of CHINATOWN. The Sucklord has shown work all over the USA, Japan, Europe, and Southeast Asia. He has been featured in The New York Times, The Village Voice, and National Public Radio’s ALL THINGS CONSIDERED. Misunderstand him at your peril! 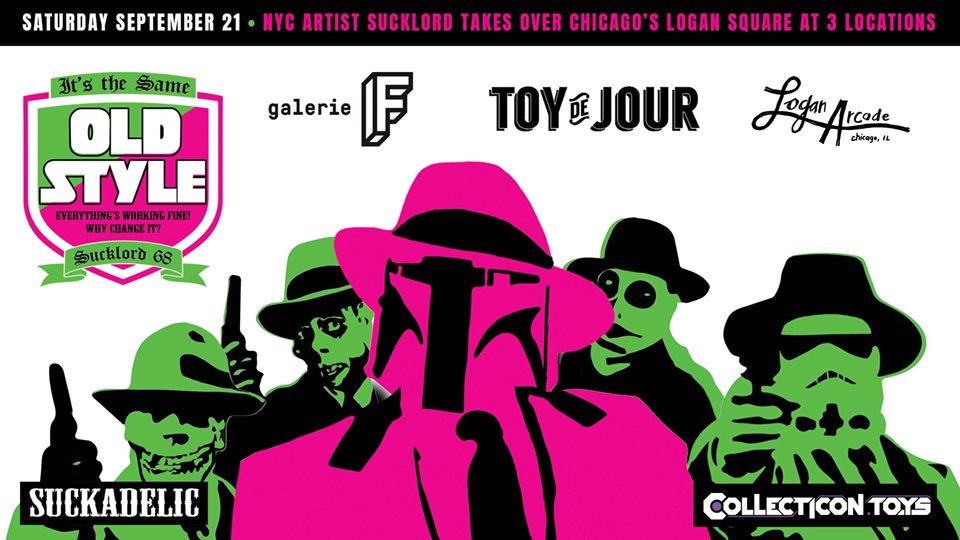