On view through Saturday, November 30th

Produce Model is proud to present its last two exhibitions:

Please join us for the opening reception Saturday September 21, 7-10pm. Like in all our openings we’ll have food from our neighbor Doña Emilia!

–
NEW AGAIN is the culmination of an exchange. As humans, citizens, coworkers, siblings, friends and lovers we try to put frames and borders around ideas and realms of our existence in a feeble attempt to better understand them. Inevitably, they fail. For this we are grateful.

In 2014, Javier Bosques and Maggie Crowley were both employed at Acadia Summer Arts Program, AKA Kamp Kippy, in Bar Harbor, Maine. They spent the spring, summer, and some of the fall, working with artists from all over the world coordinating lectures and performances. Together they worked on and contributed to Kamp Kippy’s legendary archive. For over 20 years artists had been meeting in Maine with the sole purpose of sharing ideas and building friendships. Inspired by the space and the time given to artists, Maggie and Javier left Maine and began planning their own project in the same spirit as Kamp.

In late 2015, Javier Bosques and Maggie Crowley exhibited together for the first time in a show titled, Contratos (Contracts), in Puerto Rico. They opened Produce Model immediately after. Contratos was about compromise, foundation building, agreements and the tools people use to navigate collaboration. In a lot of ways, that’s what Produce Model is about, too. It was the beginning of many different things at once.

Produce Model has been open to the public on 19th Street for just over four years. The gallery has been a home, an institution, a meeting place, an event, a spectacle, and a big kiss. We have hosted exhibitions, dinners, parties, screenings, lectures, performances, and a drag show. As 2019 winds down the gallery will exist mainly as an idea. You will probably see Produce Model soon but we can’t say how or where.

New Again is a two person exhibition of new work by PM’s co-directors. It is in response to Contratos, working with artists, living in Chicago and moving on. We want to thank all of the artists who have made Produce Model what it was in Pilsen. We hope New Again reminds everyone who sees it that everything breaks and then it begins.
_______________
VÍAS is a two person show with works by Christhian Diaz and Iria Prieto. VIAS are tracks, or ways of navigation. People use visual demarcations to separate, arrive, divide, distinguish, organize, escape and limit. Tracks create edges and an edge informs the representation of an area: your backyard from your neighbor’s, roads, cities, states, countries. In considering travel and the efficiency of routes, VÍAS questions personal geography and how people move.

Diaz’ work asks the aforementioned questions directly in his felted pieces with titles like “We All Go With Everyone” and “Swatch of Land (When the Land Went Untilled).” The pieces read like abstracted landscapes; raw ground that is mapped out for a garden or plowed earth prepared for seed. Color and shape create planes on the surface of each piece, slicing up the composition and creating tension through figure-ground reversal. Top and bottom, back and forth, over and over.

Prieto’s work presents similar formal questions about direction, land, and mobility. In her piece, “Aereal” the surface is at once a build up of marks and carved into. It is difficult to tell if her materials are being added on or erased. “Aereal” is the artist’s depiction of a runway at the Luis Munoz Marin International Airport in San Juan, Puerto Rico. Direction is intentionally confused and the viewer is left to question if the runway is seen from an airplane that is arriving or departing. 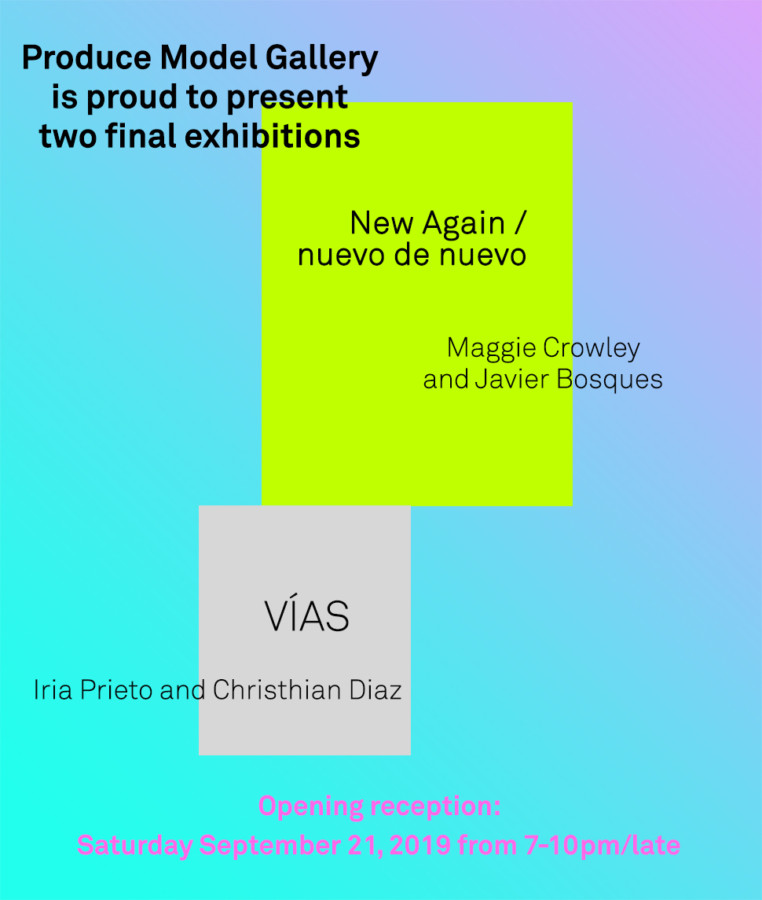