A part of Expo Week.

Mimosas and light brunch will be served.

This conversation is held in conjunction with HANNAH, a solo exhibition of new work by Kennedy Yanko

Kavi Gupta is pleased to present HANNAH, a solo exhibition of new work by Kennedy Yanko (b. 1988, USA).

Physicality is essential to Yanko’s sculptural practice. Scouring the urban metal yards and demolition sites of New York City, she seeks out intuitive, physical connections with abandoned materials she can transform in her studio. She has long sought to exert her will on these raw materials, to free them from former actualities, covering their scars and markings to allow new forces to manifest—expressions of atomism and spirit within their present reality.

In preparation for HANNAH—her first solo show at Kavi Gupta—Yanko chose to engage in more of an open call and response with the pre-existing narratives of her materials.

Says Yanko, “It was a very different experience creating this show. It became about slowing down and taking more time to allow the conceptual aspects to develop as I manipulated and created each work. Initially, while searching for the base materials, I was drawn to metals that had direct characteristics related to their past lives. These markings appeared so perfectly I didn’t feel I had the agency to remove them.”

Rather than eliminating evidence of the past—which was about allowing viewers to stay more in the moment with her works—Yanko felt compelled to start incorporating the imposed history of her materials into their present forms.

The works in HANNAH express this shift, retaining bits of text and aged, painted surfaces—echoes of their material past.

Additionally, Yanko began adding elements such as colored vinyl pieces to her sculptures, in an effort to expand the perspective of the work beyond the sculptures themselves.

“I was thinking about tracing the shadows of the work,” she says, “to bring in another element and perspective that provoked the viewer to read the pieces with a different kind of physical involvement. In addition to the metal and the paint skins, I chose blocks of monochromatic color to echo the highlights and lowlights of rust, expanding the work into the space.”

The additional contemplative aspects of the work coincide at a juncture of personal transcendence in Yanko’s career—her inaugural solo show at Kavi Gupta gallery aligns with the opening of Before Words, her first solo museum exhibition, opening September 28th at the Urban Institute of Contemporary Arts (UICA) in Grand Rapids, Michigan, and the debut of her first public sculpture on September 24th as part of The Poydras Corridor Sculpture Exhibition of New Orleans, sponsored by the Helis Foundation.

It was precisely through reflecting on the struggles that have brought her to this moment that Yanko found herself becoming more sympathetic with the markings that signified the past tribulations of her materials—perhaps it’s no coincidence the word scrap can also mean fight.

“I dropped out of school,” says Yanko, “I had every single job in New York City. All of that was about making time to make work. During that process, I didn’t look up very much. I needed to discover my own way.”

The title HANNAH grew out of this self analysis.

“Because of their (my materials’) adamant presentation of personal history, I couldn’t help but reflect on my own,” Yanko says. “I was thinking about the things I was given. You’re given situations, and it’s really up to you what you do with what you have. My birth name was Hannah Elizabeth Kennedy Yanko. I was given a name, I took what worked and left what didn’t. That was the genesis of my understanding, on a deeply tangible level, that my entire existence boils down to choice, down to perception, and my ability to hone in on that understanding became the foundation in which I began to move through this world.”

Yanko’s work has always been about disrupting pre-existing associations. HANNAH announces the arrival of an artist who has welcomed a new paradigm of thinking, in which we consider not only what we are now, but how things have come to us in this moment.

And like the paint skins that she adds to her metal pieces, it’s also about how we relate to our surroundings.

“The framework supports the skin,” Yanko says, “and the metal becomes the composition that the skin responds to. There’s this play on how they interact and respond to each other. I’m fascinated with paradox, and seeming opposites, when actually they are so dependent on each other. I’m interested in the moment when they come together in that interdependence. One thing can’t exist without the opposing force.” 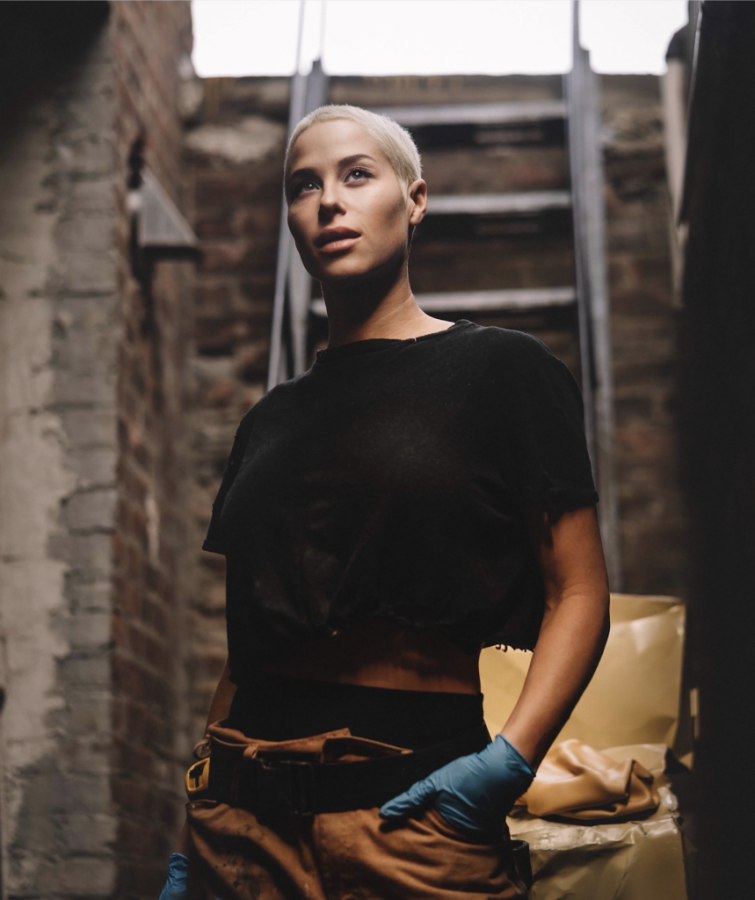