Father and son artists John Pittman and Steuart Pittman can look back to a time just before Steuart’s birth as the starting point of their relationship as artists. During the months awaiting Steuart’s arrival in 1984, John completed a small shadow-box sculpture featuring two monochromatic cubes and an exquisitely carved walnut baseball bat. The piece (Grace – 1984) was curiously prescient of the love that the son would share with his father for sports generally and baseball in particular. A birthday card made when Steuart was six years old took inspiration from the shapes he saw his dad obsessing over, leading John to create a painting based on the drawing Steuart made on the front of the card. Three decades later these two remain deep in each other’s lives as artists, sparked by genuine faith in what the making and experiencing of art has to offer. There is rarely a day that goes by that the two of them aren’t in touch about something going on in one another’s work. Steuart even makes the sets of labels that accompany each of John’s paintings (one on the back of the painting, one on the front of its box) using his grandfather’s typewriter. The influence that John’s work has had on Steuart is clear and something they both embrace with pride, as evidenced not only by the aesthetics of their output but also in how they approach production.

The significance of space as something to compose and compose within is immediately obvious in the work of these artists; each piece is a structure that both contains and is contained. In order for these structures to function in the ways that they do, the artists rely upon particular physical and psychological spaces for creating their work. These spaces serve as sanctuaries that extend moments of departure from the studio to the gallery, providing respite through acts of creation and acts of viewership. The seeking of respite is something that must happen in opposition to the very forces that render it essential. Arriving at a true respite demands a willingness to barricade yourself from even the most common external conditions that might otherwise govern your days. It is a process that requires an open and disciplined approach, one that is rigorous and meditative; a quality shared by John and Steuart.

While comprehending the similarities found between each artist’s work may be useful, it is only when you start examining the differences in the results of their decisions that fruitful distinctions begin to emerge. Compared to his father’s rigid geometry Steuart’s work could come across as loose. That rigidity is then betrayed after close inspection when the wild scratching and carving of John’s surfaces are revealed. Likewise, the meticulous application of paint bushed into place by Steuart informs his own sort of attention to precisely solidified forms. Though applied quite differently, both artists employ the use of frames or borders to establish the physical limits of each piece’s autonomy, while simultaneously allowing their work to forge direct connections with each other and the architecture they now occupy. Placing these pieces in a field of coexistence, such as this exhibition, offers a novel context for John, Steuart, and their viewers to generate new outcomes from these works, and to reconsider their own relationships to space – both internally and externally. 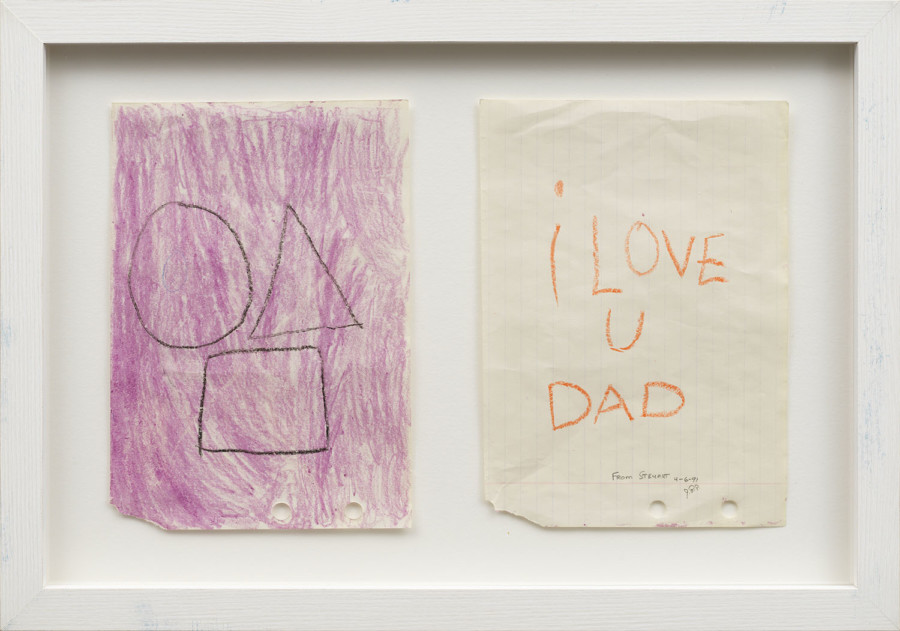