Derek Boshier first came to prominence as a student at the Royal College of Art in London in the early 1960s, with fellow students David Hockney, Allen Jones, R.B. Kitaj, and others in the British Pop Art movement. His “Ghosts of” series now includes Chicago, and these drawings were made specifically for this exhibition. 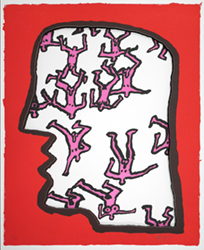