David Antonio Cruz: One Day I’ll Turn the Corner and I’ll be Ready For It

moniquemeloche is thrilled to present One Day I’ll Turn the Corner and I’ll Be Ready For It, an exhibition of new paintings by David Antonio Cruz. This is Cruz’s first exhibition with the gallery and his first in Chicago.

David Antonio Cruz explores the intersectionality of queerness and race through painting, sculpture, and performance. Focusing on queer, trans, and genderfluid communities of color, Cruz examines the violence perpetrated against their members, conveying his subjects both as specific individuals and as monumental signifiers for large and urgent systemic concerns.

Using a vast trove of images mined from the internet, including the personal social media accounts of his subjects, Cruz brings these individuals out of the shadows and into the light. He inserts these individuals’ likenesses into lush, sensuous compositions directly inspired by the aspirational aesthetic of luxury and fashion, creating a dissonance that critically elevates his black and brown subjects while also emphasizing the extreme injustice of their plights.

To further enrich these portraits with depths of meaning, Cruz employs a unique and coded visual vocabulary. Baroque background patterns reveal real plant types, whose native regions relate to locales where these victims lived or were found. Certain colors hold certain meanings (green relates to immigration, for example), a formal code that evokes the charged relationship between skin tone and identity. Organic, anthropomorphic forms peer out from behind figures, witnesses that break the fourth wall, inviting us in to these newly-transparent worlds. In this way, Cruz illustrates his subjects’ stories through portraiture, positioning them firmly within an art historical canon from which they have been largely excluded. In doing so, he further saves their narratives from the white noise of media coverage whose disregard bars such truths from entering our collective consciousness. Cruz humanely retrieves his subjects from this imposed invisibility.

The new paintings on view present a timely development in Cruz’s examination and memorialization of this all-too-regular brutality: they extend the reach of his political discourse to include issues related to immigration and displacement at the US-Mexico border. His subjects’ stories convey specific ways in which queer and trans folks have suffered in this contested space. Roxana died while incarcerated after ICE denied her medication. Carlos’ deportation has separated him from his husband and son. While these injustices may be unique to this particular conflict, the collateral human suffering they yield is universal. Cruz’s deeply empathetic gaze enlightens the viewer to those overlooked but urgently salient experiences, facilitating a communion of humanity between seer and seen.

David Antonio Cruz (b. 1974, Philadelphia) received his BFA in Painting from Pratt Institute and his MFA from Yale University. He also attended Skowhegan School of Painting and Sculpture and completed the AIM Program at the Bronx Museum, New York. Recent residencies and fellowships include the LMCC Workspace Residency, New York (2015); Gateway Project Spaces, Newark, NJ (2016); BRIC Workspace Residency, Brooklyn (2018); Neubauer Faculty Fellowship, Tufts University, Boston (2018); and the Joan Mitchell Foundation Painters & Sculptors Award (2018). Cruz’s work has been included in notable exhibitions at the Smithsonian National Portrait Gallery, Washington, D.C (2014); El Museo del Barrio, New York (2016); the Ford Foundation, New York (2019); the Brooklyn Museum (2019); and the McNay Art Museum, San Antonio (2019). Cruz also presented performances at Performa 13, New York (2013); and the High Line, New York (2015). Cruz lives and works between Brooklyn and Boston, where he is a Professor of the Practice in Painting and Drawing at the School of the Museum of Fine Arts at Tufts University.

Tags: Chicago, David Antonio Cruz, moniquemeloche, One Day I’ll Turn the Corner and I’ll be Ready For It, West Town 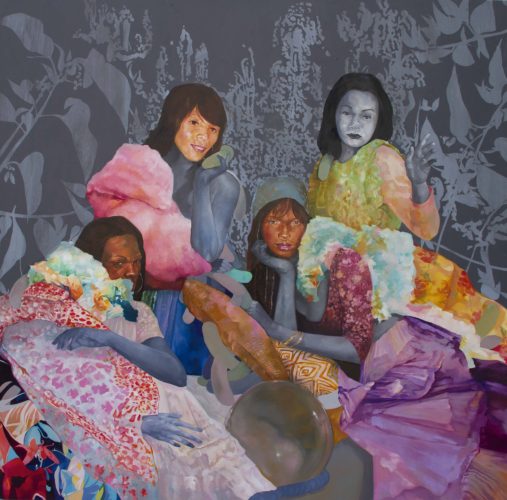