On view through Saturday, October 12th

Corbett vs. Dempsey is pleased to present Builder, an exhibition of new work by London-based painter Caragh Thuring. This is Thuring’s first exhibition in Chicago.

In her recent paintings, Thuring has had her own photographic images woven into the fabric of a canvas, onto which she then paints. With tapestry-like precision, the underlying images are locked into a spatial matrix. Each image becomes material, a palpable object with warp and weft, configuring a ground that goes deeper than surface. These photo-canvases can be specific or non-specific; some conjure a particular time and place, while others remain a mystery, at the service of their poetic power. Using imagery the way another painter might use color or contrast, de-emphasizing the particular depiction, these references speak to some inner-space mysteries, opening up the non-specific places for psyches to roam free, to associate at will, to build upon, to mix field, ground, shape, and reference in a concatenation of allure. Thuring locates a path where lush visual narratives resonate, resistant to definition, on a plane inhabited by more questions than answers. In “Desire Lines” (2019), an image of a New Mexico landscape resembling a classic John Ford film is interjected with a tartan pattern, creating a visual riddle, mercurial in its beautiful, unimaginable story. “Bunnet” (2019) consists of a simple photo of the artist’s childhood drawing of her mother, floating without context, like a ghost, a youthful scrawl translated into a field of threads. In “Leaders and Laggards” (2019), spoiled dogs sit aboard a private jet, held in time on a woven background of newspaper stock reports – the sensical taking the nonsensical for a walk.

In the North Gallery, CvsD is pleased to present End World Music, an exhibition of seven new wall-hanging sculptures by Carol Jackson. This is the artist’s second show at the gallery. Jackson is a master leather worker and a scholar of various forms of ornamental design, but in her objects she pushes the tropes of both to a perverse new place, investigating fetishy surfaces resembling reptile skin and wood grain, also rough textures parched to cracking, sometimes arranged into tube-like protuberances that seem squeezed out from and back into the wall like an alien limb or errant intestines. The color palette is at once consonant and strange, from bronze patina to bright blues and purples, nonsense words hovering in the margins of a large ornately scalloped frame (obliquely recalling an earlier moment in Jackson’s work, when text was a central feature), a veil of leather fringe held back from a cameo of a car crash photo, faux slats of wood hanging below like quaint camp signs, their charm twisted into a question mark and then evacuated and left empty.

Austrian filmmaker Martin Arnold enacts a sort of revenge on the history of filmmaking, stretching a ten-second snippet form the 1962 film “To Kill a Mockingbird” into a stuttering, twisting, maddening eleven-minute masterpiece. Arnold’s elaborate editing creates a rhythm independent of the source material, like a deejay scratching a familiar record into oblivion. 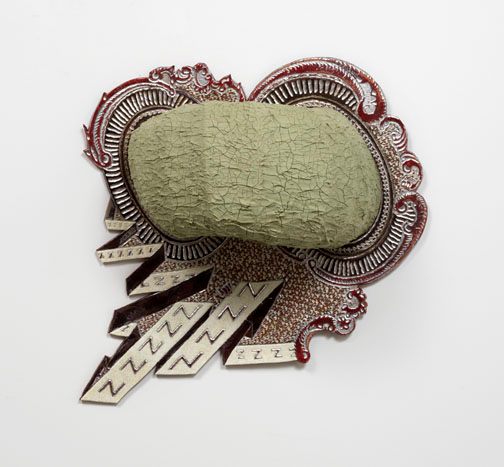