On view through Friday, November 22nd

The program features new site-specific commissions by Charles Atlas and Petra Cortright that will be unveiled during a FREE public viewing party on Saturday, September 21, 6:30 PM on Wacker Drive between North Franklin and North Wells Streets, followed by a firework display concluding the program.

“We are proud to present a strong program highlighting new contemporary artwork by Charles Atlas and Petra Cortright on our monumental platform this fall.” said Art on theMART Executive Director Cynthia Noble. “The visually and conceptually rich work is perfectly suited for a presentation of this scale and will be essential viewing for Chicagoans and visitors from around the world.”

The program will also feature extended viewing of select soliloquies by Year of Chicago Theatre artist John Boesche, including a projected performance by Cheryl Lynn Bruce backgrounded by images of paintings by Kerry James Marshall.

The fall launch is in alignment with EXPO CHICAGO 2019 and the Chicago Architecture Biennial.

Charles Atlas‘ site-specific projection is an approximately eight-minute piece, broken down into 1-minute chapters, which each feature a characteristic combination of abstract shapes and numerals. Chapters begin with a splash of color that starts at the base of theMART’s façade and rises to the top of the turrets, animating and exploring the structure and architecture of theMART.

“I am very excited to be working with Art on theMART on my first public art commission,” said artist Charles Atlas. “In my recent installation work I have been working at a large scale, but never at nearly the scale of the Chicago piece, which is inspired by and in response to the architecture of the façade of theMART. The projection represents a continuation of a tendency of some of my recent video work towards pure color and abstraction.”

Charles Atlas has been a pioneering figure in film and video for over four decades. Atlas has extended the limits of his medium, forging new territory in a far-reaching range of genres, stylistic approaches and techniques. Throughout his production, the artist has consistently fostered collaborative relationships, working intimately with such artists and performers as Leigh Bowery, Michael Clark, Douglas Dunn, Marina Abramovic, Yvonne Rainer, Mika Tajima/New Humans, Antony and the Johnsons, and most notably Merce Cunningham, for who he served as in-house videographer for a decade from the early 1970s through 1983; their close working relationship continued until Cunningham’s death in 2009.

In Petra Cortright‘s site-specific commission Webcam still life with flowers: blue, green, and red, the artist continues an exploration into merging her painting and video practices. The work blurs the Ines between the two using a range of technical and figurative modes key to her work in both fields. The result reflects the incredibly intimate and low fi approaches to which Cortright works, translated to a grand scale.

“I wanted to make something bright and beautiful for Chicago’s public,” said artist Petra Cortright. “The effects used in the videos took the architecture of the building into account, and the simplicity of the figurative content is meant to offer space for a contemplative visual experience.” Cortright added, “The best gift is always flowers.”

Petra Cortright’s core practice is the creation and distribution of digital and physical images using consumer or corporate softwares. She became renowned for making self-portrait videos that use her computer’s webcam nd default effects tools, which she would then upload to YouTube and caption with spam text. Cortright’s paintings on aluminum, linen, paper or acrylic are created in Photoshop using painting software and appropriated images, icons and marks. The digital files are endlessly modifiable, but at a “decisive moment” they are translated into two-dimensional objects. They become finite, yet their range of motifs and marks, and their disorienting perspectives and dimensions suggest dynamic change.

From Broadway theater productions to performances by premiere dance companies, John Boesche is an acclaimed Chicago-based media designer with a diverse creative background. Locally, he has worked on productions at Chicago Shakespeare Theater, Chicago Symphony Orchestra, Goodman Theatre, Joffrey Ballet Chicago, Steppenwolf Theatre and many more. He has also worked on dozens of productions nationwide, including “The Glass Menagerie” on Broadway at the Roundabout Theatre. Since 2012, Boesche has been Chair of Digital Media for Live Performance, University of Illinois at Urbana-Champaign. 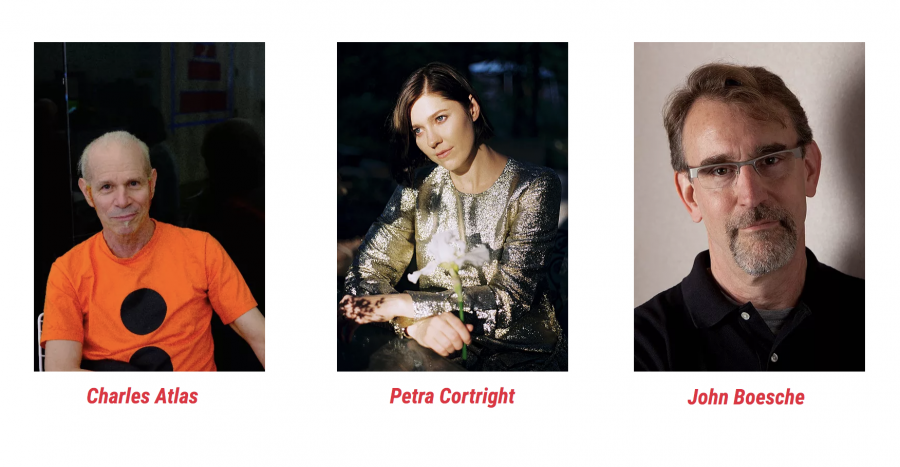