Join us September 17th as we welcome Amanda Goldblatt, author of the new novel HARD MOUTH (8/13/19 Counterpoint Press) and Jac Jemc, author of THE GRIP OF IT (2017 FSG Originals).

For ten years, Denny’s father has battled cancer. The drawn-out loss has forged Denny into a dazed, antisocial young woman. On the clock, she works as a lab tech, readying fruit flies for experimentation. In her spare time, only her parents, an aggressively kind best friend, and her blowhard imaginary pal Gene–who she knows isn’t real–ornament her stale days in the DC suburbs.

Now her father’s cancer is back for a third time, and he’s rejecting treatment. Denny’s transgressive reaction is to flee. She begins to dismantle her life, constructing in its place the fantasy of perfect detachment. Unsure whether the impulse is monastic or suicidal, she rents a secluded cabin in the mountains. When she discovers life in the wilderness isn’t the perfect detachment she was expecting–and that she isn’t as alone as she’d hoped–Denny is forced to reckon with this failure while confronting a new life with its own set of pleasures and dangerous incursions.
Morbidly funny, subversive, and startling, Hard Mouth, the debut novel from 2018 NEA Creative Writing Fellow Amanda Goldblatt, unpacks what it means to live while others are dying.

AMANDA GOLDBLATT is a writer and teacher living in Chicago. She is a 2018 National Endowment for the Arts Creative Writing Fellow, and her fiction and essays have appeared in such journals as The Southern Review, NOON, Fence, Diagram, Hobart, and American Short Fiction. Hard Mouth is her debut novel.

About THE GRIP OF IT:

Touring their prospective suburban home, Julie and James are stopped by a noise. Deep and vibrating, like throat singing. Ancient, husky, and rasping, but underwater. “That’s just the house settling,” the real estate agent assures them with a smile. He is wrong.

The move–prompted by James’s penchant for gambling and his general inability to keep his impulses in check–is quick and seamless; both Julie and James are happy to start afresh. But this house, which sits between a lake and a forest, has its own plans for the unsuspecting couple. As Julie and James try to establish a sense of normalcy, the home and its surrounding terrain become the locus of increasingly strange happenings. The framework– claustrophobic, riddled with hidden rooms within rooms–becomes unrecognizable, decaying before their eyes. Stains are animated on the wall–contracting, expanding–and map themselves onto Julie’s body in the form of painful, grisly bruises.

Like the house that torments the troubled married couple living within its walls, The Grip of It oozes with palpable terror and skin-prickling dread. Its architect, Jac Jemc, meticulously traces Julie and James’s unsettling journey through the depths of their new home as they fight to free themselves from its crushing grip.

JAC JEMC’s story collection False Bingo will be released in fall 2019 and her novel Total Work of Art will be published in 2021, both from FSG. She is also the author of The Grip of It, My Only Wife and A Different Bed Every Time. Jemc teaches creative writing in person at StoryStudio Chicago, and online for Catapult, The Loft and The Center for Fiction. 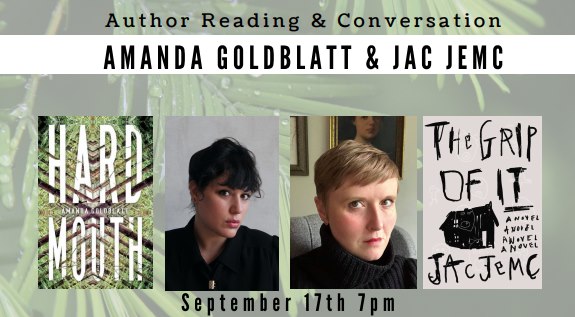