A lone doodle from 1963 has grown into the project of a lifetime for Michigan-based artist Jerry Gretzinger. The first piece of Jerry’s Map was made while he was bored, working at a ball bearing factory. This map-an ongoing project-now spans the length and width of a full-sized basketball court.

On view at Intuit beginning August 15, Jerry’s Map features selections from the map of his imaginary world. The vast project now consists of about 3,600 individual 8 x 10″ panels conjoined to make a single, large-scale map filled with cities, countryside, rivers, airports, railroads and other features representing everyday life in this imagined realm. The panels are executed in acrylic, marker, colored pencil, ink, collage and inkjet print on heavy paper. The oldest panels are at the center of the map, with new panels generated from the core outward and each panel labeled.

Gretzinger paints and collages pieces of the map based on randomly-generated instructions drawn from a special deck of instruction cards. When an instruction card is drawn, a modification is made to the specified panel, depending on what card and instruction is drawn. The original panel is scanned and filed, and a new panel takes its place. Rules could call for the addition of a new panel, new painting or collaging on an existing panel, the creation of a new facility or feature, or even the addition of a “void”-a white space removing what is underneath that can only be stopped by a defense wall card.

Gretzinger did take a break from his map making in 1983, when he devoted time to running a business and raising a family. Years later, his son Henry found Gretzinger’s discarded map in their attic and asked his dad about it. That inspired Gretzinger to again pick up the forgotten project. Now, in 2019, Gretzinger works on the map daily, adding new panels, rearranging the configuration of existing panels and watching cities he’s spent years creating succumb to BLACK NESS or the RED DIMENSION, forces of change decreed by the cards and, therefore, beyond his control.

Due to its size, Jerry’s Map has only been exhibited once in its entirety, at the Massachusetts Museum of Contemporary Art (2012). Intuit’s exhibition will include one-third of the total map, making it the second largest display of the map. In addition, the exhibition will include 12 single panels that highlight the evolution of the project and allow viewers to be drawn into individual panels through a more intimate immersion of select isolated pieces of the map.

Born in Grand Rapids, Mich., in 1942, Gretzinger studied architecture and liberal arts at the Universities of Michigan and California. He joined the Peace Corps in 1966 and spent two years in Tunisia, later returning to that country in 1968 as an architect with an archaeological team to catalog the Roman mosaics there. He came back to the United States in 1973 and started a handbag design company in New York. In 1982 he and his wife, Meg Staley, formed Staley/Gretzinger, a women’s art-to-wear company. He retired to Maple City, Mich., in 2004. 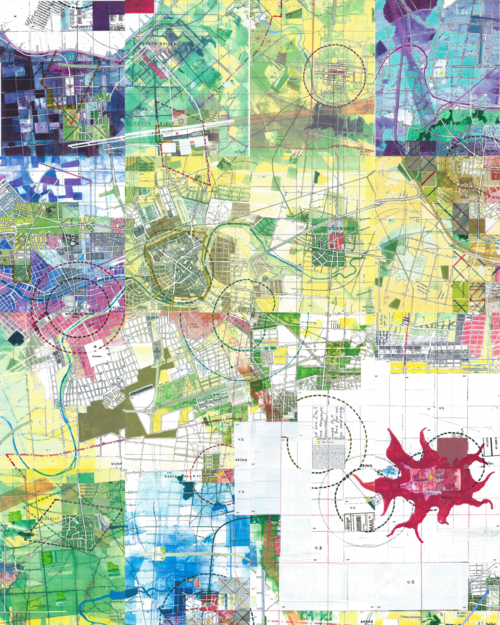