Looking at You From a Distance Not Too Far: Work by Marvin Tate

Looking At You From a Distance Not Too Far: Work by Marvin Tate features more than a dozen works by the Chicago-based visual artist, performance poet, lyricist, author and educator. Tate is known for his biographical art in the form of assemblage, portraits and landscapes, which are composed of found objects and fragments from everyday life. The exhibition opens Thursday, Aug. 15, 2019, at Intuit: The Center for Intuitive and Outsider Art, 756 N. Milwaukee Ave., Chicago, with a free, public reception with the artist from 5-8 p.m.

A North Lawndale native, Tate grew up in a home without a TV or radio, in which the family entertained one another with songbooks and reading aloud. “I remember hours spent exploring abandoned buildings, walking the streets of changing neighborhoods and playing in my mother’s closet,” said Tate. These existential journeys were filled with fear, excitement and materials that would later inform his work. Tate finds the beauty and subtlety in everyday life, objects and people, a perspective inherent in his narrative, which speaks of personal and family history while addressing a broader collective memory through social and political commentary. “Intuit’s exhibition explores Tate’s interest in storytelling, personal narrative, and political commentary-often woven together-through examples of his work from 2003 to the present,” said curator Alison Amick.

Inspired by the poet Gwendolyn Brooks, Tate studied poetry before moving to New York for several years in the mid-1980s. Shortly upon his return to Chicago, he began focusing on making music and, soon after, art. Around 1990, inspired by holiday-themed snow globes in his grandfather’s home and ships in bottles he saw on a trip to Tijuana, Tate began creating snow globes from jars and found objects. Tate used this medium to comment on political and personal experiences, as in Americana (2003), which explores racism. In the early 2000s, he began focusing on making box dioramas from found objects. AiLein’s Old Apartment(2015) pays tribute to an artist friend, while The Adventures of Dick and Jane (2016) imagines the classic children’s reading book characters reading a newspaper with the headline “Black Lives Matter” repeated several times.

Tate’s visual art and poetry often reflect and comment on personal experiences as well as current political issues. J.T.’s Place (2010), a stacked piece consisting of two boxes, references the abandoned basements Tate explored in his youth and a stint teaching art in a prison. A recent sculpture, Insomnia in New York City (2018), shares the title of the first poem Tate published, which tells of an evening of a sex worker and her friend.

Tate has collaborated with sound artist Joseph C. Mills and video and performance artist Jefferson Pinder; filmmaker Colleen Smith, multimedia artist Theaster Gates; and the Black Monks of Mississippi, musicians LeRoy Bach, Mike Reed, Tim Kinsella and Angel Olsen. The exhibition will be accompanied by selections of Tate’s poetry and music that relate to the works on view, including It’s a Great Day in the Neighborhood (2013). Tate will be performing at Intuit at 7 p.m. on Thursday, Oct. 24, 2019.

Tags: Alison Amick, Chicago, Intuit: The Center for Intuitive and Outsider Art, Looking at You From a Distance Not Too Far: Work by Marvin Tate, Marvin Tate, West Town 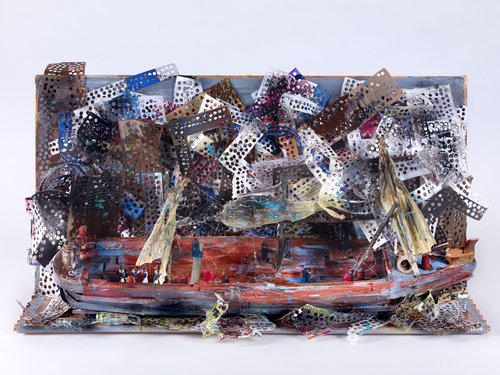