Tim Presley: Under The Banner of Concern

“The selected works all consist of black ink on white paper, and in a uniform size creating a tiling effect on the walls of the gallery. The repetition of the drawings, and the fluid swirling and scratching black marks which make up Tim Presley’s compositions create a visual experience recalling petroglyphs.

Presley’s drawings merge abstracted and expressionistic brush and line work, creating hollowed out figures in a flat graphic plane. The images are often surrounded by a border of scrolling text, minded directly from Presley’s stream of consciousness, at other times they are references and snippets from poems that the artist continually returns to. The figures in Presley’s work bear an archetypal “every figure” symbology in their emptied out flat bodies and hollowed eye sockets. Presley’s figures are broken down into simple forms through his use of line work, at times they appear sexualized and at others more like dolls and masks; the artist’s approach to mark making embeds the works with a humanist emotional touch yet the figures often feel more like symbols to represent people or a resting place to project on. Like the simplified figures of cave paintings, or German Expressionist painters, Presley’s simplified figures reveal more about one’s self, or are a place for introspection rather than pure image making. ”

Tim Presley is a musician, producer and visual artist living and working in San Fransisco. He has released albums under the following monikers: White Fence, W-X, DRINKS, Ty Segall & Tim Presley, Tim Presley’s White Fence and his own name. 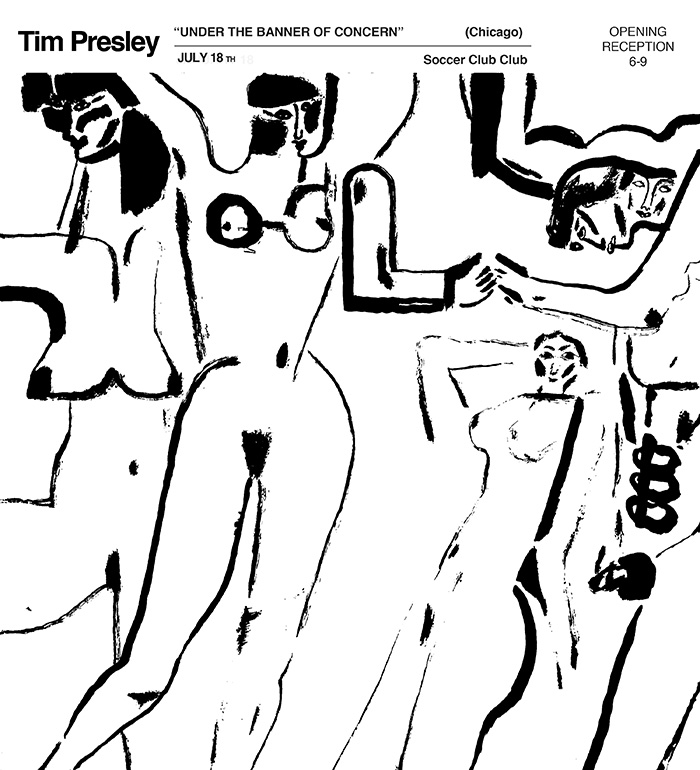