Tim Nickodemus & Eric Ruschman: To draw nothing. Or the sea

Tim Nickodemus has been drawing mountains of the Pacific Northwest and the Rockies for ages. Except that he’s no longer looking directly at mountains. He is drawing from other people’s paintings, specifically a series of works by Thomas Moran. Part of observing is synthesis of indirect information that comes our way. The history of a place, the way someone else has worked to encapsulate it, the science that makes visual information look the way it does to our eyes. The water he draws is here, his new backyard. He eagerly told me of his new discovery that wave patterns on the water’s surface echo the peaks and valleys on the sea’s floor. A bit of a coming out party, a confession that the Midwest is becoming his home. Tim is sensitive to the idea that being in a new place will never erase the part of him from another. He neither observes from a vantage point as a permanent outsider, nor does he get stuck wondering who he is. Leaves him supple and movable, while supported and decisive. His drawings are calculated rather than improvised.

Eric Ruschman paints from television, fashion, and toys. Not a straightforward version of what a particular still looks like. Nor of its motion. He distills an object that implies the entire set, like curtains that clearly frame a window but also establish the decor of a living room. Just curtains to bring us into a room. Sometimes he places a character in the space that implies the setting like his harp seal set in a room to imply that we are under the sea with his seal. Like Tim, he calculates and removes much before ever going to material with his tools. Images built with concise shapes and flat colors. There is play with what is not presented, a kind of doubling down on what is absent, what lies beneath the horizon, undrawn.

Tags: Chicago, Eric Ruschman, Lower West Side, Slow, Tim Nickodemus, To Draw Nothing Or the Sea 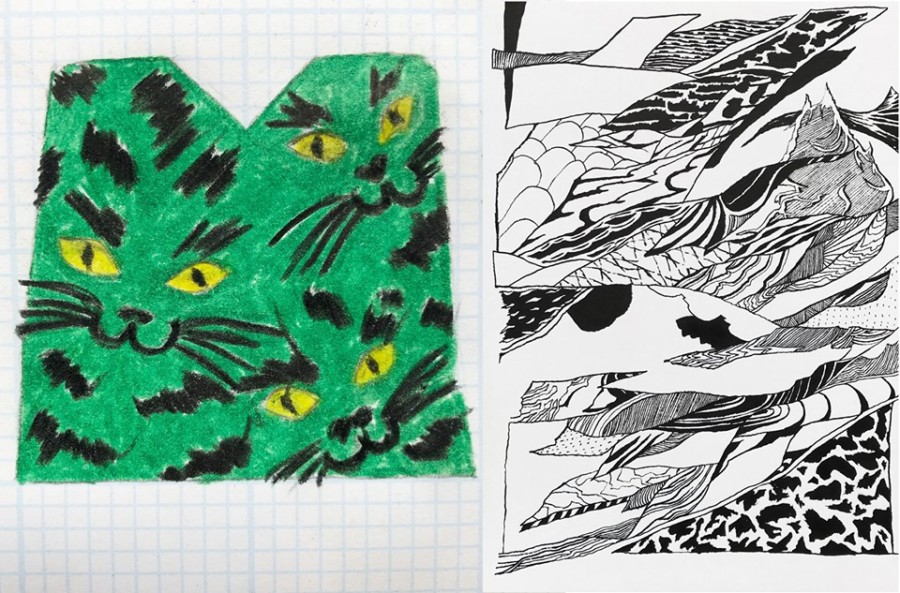