THE FLORIDA PROJECT
Directed by Sean Baker • 2017
This widescreen, candy-colored-but-never-sugar-coated marvel makes us want to visit the Sunshine State like no movie since Kelly Reichardt’s “River of Grass.” “The Florida Project” is a clear-eyed tour of Kissimmee, a land of bed bug-infested residential motels sprung up on the highway in the shadow of Walt Disney World, where outfits like the Magic Castle Motel are held upright by worn-out working men like Bobby (Willem Dafoe), a combination manager, sheriff, and surrogate father figure, too stoic to let his own disappointments reveal themselves to his guests. An unvarnished work about people living on the margins and continually flirting with homelessness, incarceration, and Child Protective Services, “The Florida Project” could fit snugly within a classic ‘social problem film’ framework of an earlier generation, but writer/director/editor Sean Baker’s celluloid north star is Hal Roach rather than Stanley Kramer. Six-year-old Moonee (Brooklynn Prince) could hold her own with Our Gang any day of the week, whether she’s spitting on cars over a railing or accidentally setting abandoned buildings ablaze. Her mother Halley (Bria Vinaite) ekes out a living hawking wholesale perfume to befuddled tourists, but her increasingly desperate circumstances dictate a new approach that flies mercifully over Moonee’s head. This unassuming film is so rigorous in maintaining its child’s-eye-view that the eventual rupture is heartbreaking beyond words. Gorgeously photographed in 35mm by Alexis Zabe, who learned a thing or two about keeping up with kids as they run through overgrown brush while shooting Carlos Reygadas’s “Post Tenebras Lux”, “The Florida Project” was initially distributed as a DCP-only title; we are proud to present the Chicago premiere of this unique print. (KW)
112 min • A24 • 35mm from A24 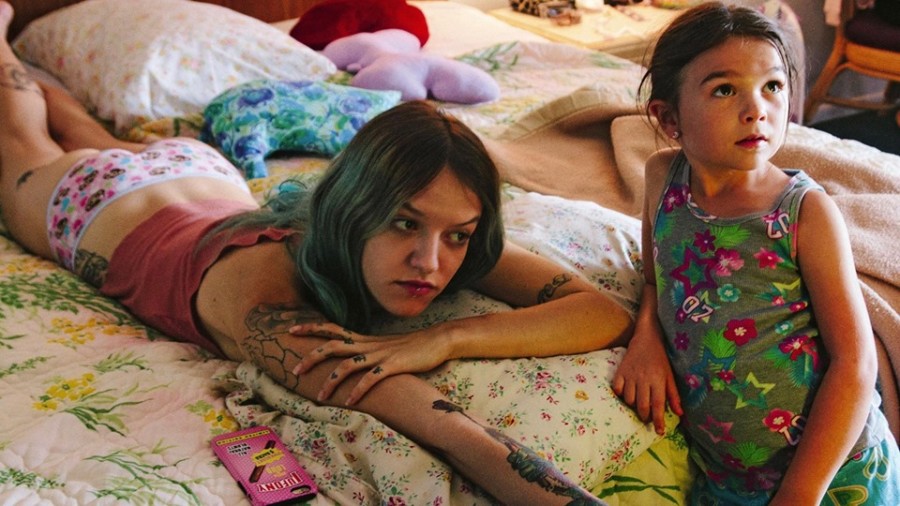