Join us on Friday, July 26th at 8:15pm for The Night Gallery’s summer 2019 series Drinks Reception.

Designers Olive Ouyang and Nathaniel Gillette will speak in person on their short film, To The Lighthouse.
Remarks at 8:15 pm followed by a brief discussion and Q&A.

While the drinks reception is on the 26th, the exhibition opens on July 19th at sunset (8:15pm). Explore our neighbors’ galleries as part of Bridgeport’s Third Fridays art walk.

Our planet is becoming unlivable at a much faster rate than we could imagine. Our cities are subject to entropy and degradation: climate change, air and water pollution, destruction of agriculture, rising sea levels and depletion of ozone layer that exposes all living beings to dangerous levels of cosmic energy… Are threats accelerate exponentially within our deeply interdependent ecosystems. The condition of our future is transient; survival is only made possible by the dynamics of change and we have no choice but to adapt. The political, technological, epistemological and personal efforts in adaptation under extreme conditions created by destruction offer distinct parallels with the theoretical work of Lebbeus Woods. His mythology engages the consequences of destruction, neither attempting to erase nor memorialize them, but to use them as the starting point for a new sensibility, a new basis for creative action.

The lighthouse, as a beacon of light, is a symbol of power, warmth, consistency and safety. As a structure that historically serves as both a landmark and a navigational aid, it marks both dangerous terrains, hazardous weather conditions and safe passages to harbors. By appropriating the symbolism of a traditional lighthouse, this project proposes a hypothesis of an interplanetary network of un-manned “lighthouses” that are made obsolete, yet still in operation long after the destruction of planet earth and the displacement of the human race. Influenced by Woods’ designs, each structure originally serves as an autonomous, self-repairing relay station for survey drones that gather data from its surrounding environment, then analyzes and communicates with other lighthouses about its findings.

Olive Ouyang (M.Arch 2018, SAIC) is a Chicago-based designer, artist and writer from Guangzhou, China. Her work combines a background in architecture with an intense academic interest in how spatial experiences are produced and disseminated through mediating technology. She is currently invested in subjects relating to the collective fear of the disappearance of physical objects/places, and in parallel – the active architectural production and proliferations of the virtual realms.

Nathaniel Gillette (BFA 2018, SAIC) is a digital artist based in Chicago, IL. Through 3D animation, VR and sound design, his work engages the dream-like implications of virtuality amidst the dissonance of our anxiety-ridden and increasingly tech-dependent everyday life. He seeks to challenge the notion that escapism is fundamentally and exclusively negative by exploring elements of emancipation and cognitive autonomy in the attempts to refigure a different reality. 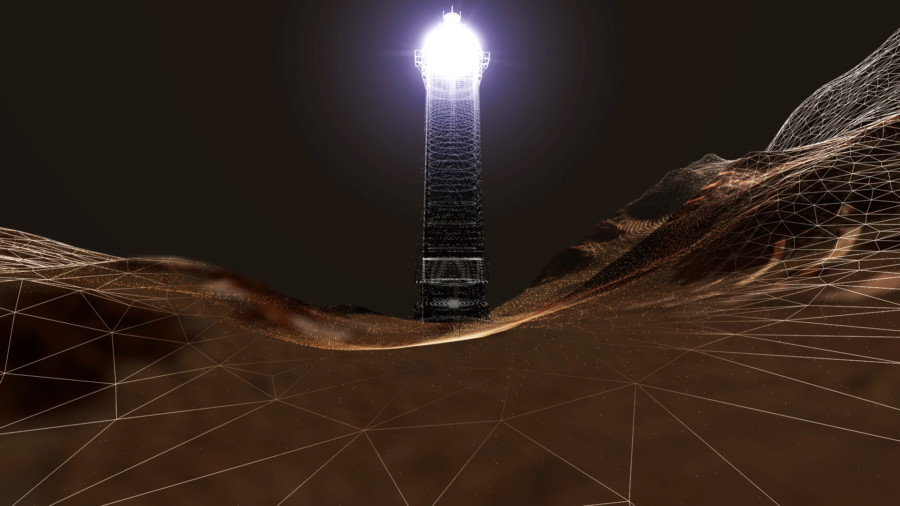