On view through Saturday, July 13th

Join us for an artist talk with Gunjan Kumar, Rhonda Wheatley, and Stacia Yeapanis on the final day of their exhibition “Manifestations.” The artists will provide insight into their work and answer audience questions. Refreshments will be provided.

One After 909 is thrilled to present work by Gunjan Kumar, Rhonda Wheatley, and Stacia Yeapanis in Manifestations. All three of these artists work in different mediums ranging from paper pulp to perfume bottles, but their work is unified through ritualistic processes, symbolic dualities, and metaphysical interests.

Meanings are layered as thickly as the materials in Kumar’s Weight of Time series (2018-19). Bentonite clay, a symbol of cleansing; Wasli, a form of mulberry paper used in India, and unbleached cotton muslin come together in textural, monochromatic pieces that are full of light and shadow. This duality, as well as the juxtaposition of pain and purity, is threaded throughout the sequence.

Wheatley’s body of work Untitled Paintings (2010) examines a Hopi Indian concept about universal connectivity on a quantum level. Pastel canvases are topped with white translucent velum—a representation of the invisible net that connects everything in the universe. Beneath are inviting colorful collages of food and precious stones, the physical objects that embody metaphysical ideas about our reality and the things that motivate us. In addition to contemplating energy, viewers are also invited to receive it by gazing upon charged liquids decanted within found perfume bottles.

The meditative quality of Yeapanis’ The Unwieldy Task of Trying to Get It Just Right (2019) is demonstrated in her repetitive crochet. This process fluctuates between peace and pain as she meticulously creates each stitch. Although the piece itself has been shown previously in multiple iterations and configurations, in this exhibition it will appear fused in its final form. As it loses its impermanence the crenulated edges are still mutable, changing the overall shape depending on how it is draped in a particular space. This encourages us to focus on the present moment in all of its aspects of anxiety, curiosity, and uncertainty.

The process of creation by these artists is within itself a collaboration of time and space, with the results encouraging us to participate in the outcome. Manifestations invite viewers to pause and embark on a spiritual journey that can begin in the gallery space, and continue long thereafter.

About Gunjan Kumar:
Gunjan Kumar was born and raised in Punjab, India.  A textile graduate from National Institute of Design and Technology, New Delhi, she has a keen interest in indigenous methods, archeology, pre-historic and tribal arts and has traveled extensively exploring her interest in these areas.  These experiences form the undertone her art practice.  Her processes involve self developed techniques inspired by traditional methods using ground earth and minerals like shell oysters, clay, calcium carbonate, turmeric etc. as core mediums applied on Japanese mulberry paper.  In 2016, she was invited to be a fellow at the Edward Albee Foundation, New York. Her works have been showcased at the Ukrainian Institute of Modern Art, the Donnelley Foundation, Chicago, Governors State University, IL, Olivet Nazarene University, IL, Gallery Exhibit 320,India Art Fair, Delhi, etc.  She lives and works in Chicago.

About Rhonda Wheatley:
Rhonda Wheatley is a multidisciplinary artist, educator, and energy healer whose projects are grounded in the speculative and metaphysical. She connects with the public through her visual and written works, workshops, and interactive performances to promote healing and consciousness expansion.

Wheatley’s recent projects include group shows at the DePaul Museum of Art, Lake Forest College, and Art League of Houston; a solo show at Hyde Park Art Center; an In Progress series performance at the Museum of Contemporary Art; and workshops at The Logan Center, Chicago Artists Coalition, Gallery 400, and ACRE. In 2017 Wheatley received the CAC Maker Grant’s inaugural Coney Family Award and a 3Arts ‘Make a Wave’ Grant, and she teaches at Indiana University Purdue, Indianapolis and Hyde Park Art Center.

About Stacia Yeapanis:
Stacia Yeapanis is a Chicago-based, interdisciplinary artist, educator and writer. She explores the relationship between repetition, desire, suffering and impermanence in cross-stitch embroideries, remix videos, temporary collages and improvised, sculptural installations. Stacia is an Adjunct Assistant Professor in the Department of Fiber and Material Studies at The School of the Art Institute of Chicago, where she received her MFA in 2006. She conducts weekly interviews with artists for the OtherPeoplesPixels blog. She was a 2011-2012 Artist-in-Residence and a 2012-2013 Mentor-in-Residence at Chicago Artists’ Coalition’s BOLT Residency. Her solo exhibitions include shows at Siena Heights University (Michigan 2013), Heaven Gallery (Chicago 2014), the Annex Gallery at Lillstreet Art Center (Chicago 2014), The Stolbun Collection (Chicago 2017) and Indianapolis Art Center (Indianapolis 2017) and Robert F. DeCaprio Art Gallery (Palos Hills, Illinois 2018). During summer 2018, Stacia was an Artist-in-Residence at Facebook (Chicago), and Practice, her most recent solo show, just closed at Kent State, Stark campus in North Canton, Ohio. 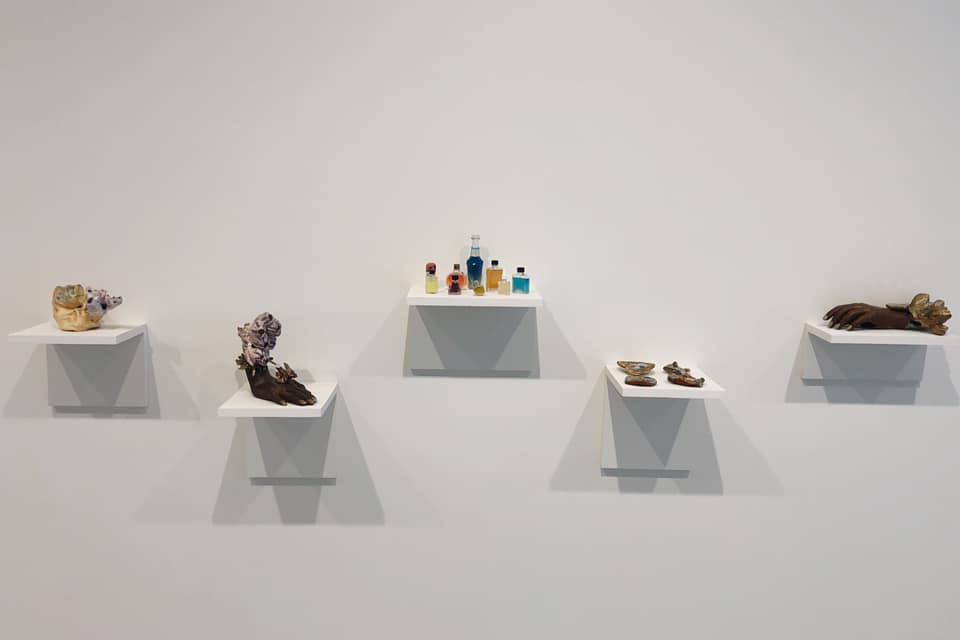