On view through Friday, September 6th

New Genres Art Space (NGAS) will open its doors to the public and begin its programming on July 20th. NGAS is a new contemporary nonprofit art space that considers digital and emerging art as a form of expression, education, and social change.

Liza Sylvestre: Third Space
ALL AGES
FREE PUBLIC OPENING RECEPTION: JULY 20, 2019 FROM 6 – 9 PM
– Special participatory video by Sylvestre will be held in the black-box theater of the Nordlof Center during opening: A Guided Meditation for Public Critique
– After party celebration at Octane Interlounge at 9:30!

“Liza Sylvestre: Third Space” is a two-channel, large-scale video art installation that focuses on science fiction, technology, and the disabled body. As an individual with a profound hearing impairment, Sylvestre depends on closed captioning or other interpretive texts to have complete understanding of films. In The Third Space, the artist replaces the missing closed captioning in two movies—2001: A Space Odyssey by Stanley Kubrick and Space is the Place by Sun Ra—with what she describes as “self-commentary”. Sylvestre explains her process while creating the piece, “Sometimes I record what I think is happening, often I record my visual observations, and sometimes my mind wanders, and I record that as well.” The two videos are projected in the corner of the gallery causing them to “touch” on the 90 degree angle.

2001 is a film made in 1968 about the future—a future we have now surpassed in chronological time. The film represents technological ideals and advancements that never came to be, or that don’t align with reality that was “promised” by a classic Hollywood hit. The artist relates 2001’s premise to the suggested utopian outcomes of technology developed for disability – cochlear implants, hearing aids, retinal implants, mobility devices for those with physical and visual impairments. To Sylvestre, the film represents a failure, in a large sense, because the reality imagined by Kubrick in 1968 has yet to materialize. 2001: A Space Odyssey inspired an entire genre of science fiction films about utopian and dystopian futures prompting Sylvestre to ask: What does it mean to create stories about possible futures? How does this relate to disability? How does technology fail us, and how does technology fail the disabled body? Do we error in thinking that technology is the answer?

Sylvestre suggests that Sun Ra’s Space is the Place complicates 2001. The artist states, “When played together, the two films operate as historical objects that play to the binaries of hi/low, white/black, production/home-video. They also both represent pillars of Crip Theory, which is a new evolution in disability theory that also encompasses the theories of race, gender, and economy, and claims an intersectional stance that demands we look at these issues intersectionality instead of singularity.”

While viewing Third Space, an enabled audience encounters oscillating narratives: the narrative of the original films, the narrative of Sylvestre’s experiences, and the unique narrative produced by experiencing both simultaneously. Projecting these films onto the walls so that the videos physically touch creates a third space between them. Since 2001 is 2 hours and 44 min and Space is the Place is 80 min they constantly generate new juxtapositions and compositions and odd syncing commonalities.

Liza Sylvestre is the co-founder of Creating Language Through Arts, an educational arts residency that focuses on using art as a means of communication when there are language barriers present due to hearing loss. In 2014 she was awarded both and Artists Initiative and Arts Learning grant from the Minnesota State Arts Board. Recently she has been the recipient of a VSA Jerome Emerging Artists Grant, a fellowship through Art(ists) on the Verge and an Art Works grant from the National Endowment for the Arts. Most recently Sylvestre has served as the artist in residence at the Center for Applied Translational Sensory Science and the Weisman Art Museum in Minneapolis, MN. She is currently holds an MFA from the University of Illinois Urbana-Champaign.

A Guided Meditation for Public Critique

You are invited to participate in Liza Sylvestre’s hypnotic 8 minute video titled A Guided Meditation for Public Critique. Appearing in the video as a calming, yet commanding presence that periodically appears from a black void, Sylvestre leads the audience through an immersive, multisensory experience.

While creating A Guided Meditation for Public Critique Sylvestre “was thinking a lot about how to make artwork that engages senses other than vision. Different parts of Guided Meditation engage different senses, or combine senses into one synthesized experience.” Sylvestre continues to explain, “A lot of what I try to do in my work is challenge or dislodge our typical sensory associations. We have a specific relationship to our senses, we value some more than others. This relationship manifests in different ways – in our language, in our value system, in our cultural material and design, and also in the way we think about and talk about disability/ability.”

The video is located in the lower lever of the Nordlof Center within the Black Box Theater. You may take the stairs or elevator from the main floor or the second floor where New Genres Art Space’s gallery is located.

A Guided Meditation for Public Critique is one night only and is on view opening night every 15 minutes from 6 – 8:45

A volunteer will let attendees into the theater every 15 minutes. Upon completion of the video, the volunteer will open the door and exchange groups.

You may leave A Guided Meditation for Public Critique at any time, but we do ask that you DO NOT ENTER until the next group is invited in. This will enhance your experience of the participatory video. 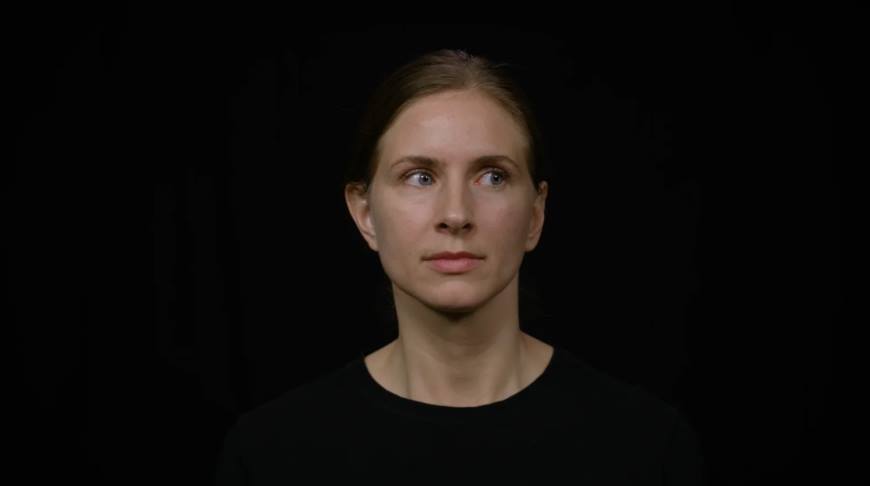