Apparatus Projects is excited to present the final exhibition at our original location with a painting show titled INSIDE OUTSIDE curated by PRACTISE Director and Artist Zachary Buchner. This exhibition brings together a group of diverse painters who each attempted to depict the indecipherable, who mine the physical body, landscape and painting with increasing urgency.

For INSIDE OUTSIDE Aviv Benn presents three new works entitled Where My Most Bitter Dream, 2019, HALFGNAWED, Mask, 2019 and Light Was, Salvation, 2019. Benn’s works depict characters in flux or translation – moving between physical and emotional states the characters are at once absurd and tortured. They seem to be reaching outside themselves in a state of alarm or ecstasy each attempting to escape their own bodies for pleasure or from pain.

Alex Bradley Cohen presents a series of paintings on paper that depict an introspective character turning and contorting inward in search of a reimagined self. Unlike Benn who’s figures break apart and float away – Cohen’s figures congeal to create a new landscape focused inward. This retreat, like the release in Benn’s figures, feels like a type of escape or a protective stance against an outside world who’s focus and attacks on bodies of all types seem to only grow more constant and concentrated. In the end the totem of works by Cohen becomes almost an edict, flags for a new resistance that can be found inward.

Adam Scott’s contribution to INSIDE OUTSIDE, Terraform 23 (Cholla Generator), 2017, shifts away from the body and deposits it’s attention more squarely on landscape. Scott’s large painting shares a common sense of interiority and containment with the other artists in the show. Like Benn or Wy whose figures drift and disperse – Scott’s gestures circulate and push outward in search of new territory. Migration and movement confined and corralled – they vibrate with an energy building.

Alien Sister, one of four watercolor works by Lauren Wy shows two figures mirrored in a staged embrace (their pose and cropping feel familiar as part of our contemporary image vernacular, reminiscent of selfies). Here two figures share a fleeting moment echoed in the soft dispersion of liquid, they conjure questions of self-presentation and self-defense in an age of image saturation, disconnected intimacy and undefinable collective trauma.

INSIDE OUTSIDE posits that there is no escape, no retreat from uncertainty—instead there is a grappling and struggle for a deeper understanding of one’s role and agency in a world that is self capitulating, self destructing, and constantly in the process of tying itself up to be drawn and quartered. But while there is a ripping apart of existence there is a buildup equally discontented. A buildup to the point of excess, of overflowing meaning. The poetics of existence flow from an overabundance of meaning, the transgression of information. The importance of not understanding is highlighted through the constant reprocessing and reexamination of the world—allowing for the incorporation of things that fall outside of our systems of understanding, but also realizing that somethings are things one translation too far outside of our scope. A simultaneous celebration of the inside and the outside. 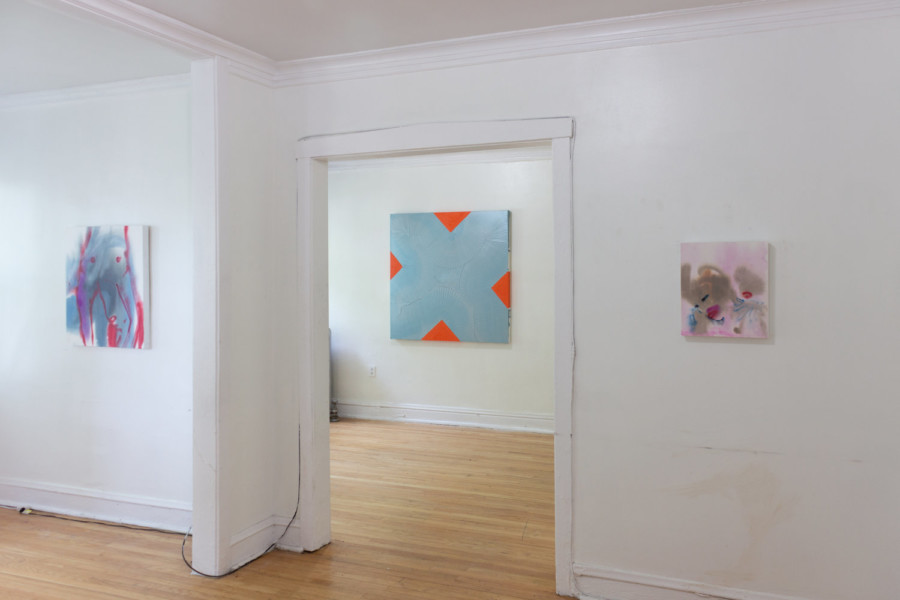