Join us for a lecture by Joshua Chambers-Letson, Associate Professor of Performance Studies at Northwestern University.

A meditation on the work of Keijaun Thomas and the labor of hospitality in “My Last American Dollar.” A fragmented fragment on the racialized and gendered divisions of labor affecting black trans and black femme life. A reverse genealogy of a family caught in the tide of slavery’s undoings. A story about a performance with a weak and strong power to remake everything. 2019, 1971, 1931, 1911, 1888, 1850, before, a slave ship, before

Joshua Chambers-Letson is a writer and performance theorist who researches and teaches courses in performance studies, critical race theory, political theory, and queer of color critique. His books and essays place performance studies in conversation with a diverse set of fields including black studies, Asian American studies, Latinx studies, art history, legal studies, and Marxist theory to ask two central questions: How do black, brown, Asian, queer, and trans people (alongside other minoritarian subjects) use performance both to survive the destruction and devaluation of their (our) lives and lifeworlds? And how does performance become a means for rehearsing and enacting new worlds and new ways of being in the world together? Artists that he considers in his scholarship include Nao Bustamante, Danh Võ, Nina Simone, Felix Gonzalez-Torres, Eiko, Keijaun Thomas, Teching Hsieh, Moriyuki Shimada, and Alexandria Eregbu.

This program is held in conjunction with About Face: Stonewall, Revolt and New Queer Art
May 22–Aug 3, 2019

This is an exhibition about metamorphosis. Fifty years after Stonewall, we’re still very much a community in progress. The traditional view, that Stonewall represents the birth of a gay and lesbian movement, couldn’t be further from the truth on at least two counts: it hardly represents the beginning and it was never just gay and lesbian. On the contrary, we have always embraced a transpolitics, in the sense of working to variously transgress, transfigure, transpose, transform, and finally, transcend a world of binary options, whether they be gay/straight, male/female, minority/majority, or conformist/nonconformist. Not for nothing were trans folk of various stripes the literal spark that ignited the Stonewall flame. This exhibition thus focuses on art in which boundaries blur, forms mutate, the natural is denaturalized, and the transgressive and transcendent are linked. In the works on view in About Face, sexuality, gender, ethnicity, and race—far from being clear categories—hybridize and overlap to the point that “queer” becomes a verb, not a noun.

As a result, we have changed the culture such that, in the main, we all are growing queerer and queerer—slowly and discontinuously to be sure, with strong regional differences and numerous, agonizing setbacks. And by we, I don’t mean only those of us who already identify with the term queer; I mean to include quite specifically those who don’t. Queers aren’t the outliers anymore, we’re the team leaders, thought-leaders, and cheerleaders for a brave new world where the stable, familiar categories of identity continue to erode and mix. This hasn’t been an easy accomplishment and the route is littered with corpses—with AIDS by no means the only cause of death. But importantly, this new queerer world isn’t about creating a more modern, stable identity, but the perpetuation of a continuously hybrid one, a recognition that we are all an amalgam of many identities, that the problem with “identity politics” is that it’s written in the singular. This recognition was modeled in art long before it could be brought to life.

About Face: Stonewall, Revolt and New Queer Art is installed in five sections—Transgress, Transfigure, Transpose, Transform, and Transcend—that map a trajectory from political resistance to the overcoming of stable identity categories. A state-of-the-field survey of queer art today, About Face features works by a diverse group of artists from Colombia, India, Cuba, the UK, Sweden, South Africa, China, France, Indonesia, the United States, and Canada. The artists are trans, female, male, and intersex, as well as African or of African descent, Indigenous, Asian, White, and Latinx, and/or some combination of all of these. Most of these artists actively seek to recruit audiences to the very queer recognition that, without the defining or policing of our differences, identity is always plural, what the poet Frank O’Hara termed “myselves.” Thus to be queer is to be a hybrid thing. About Face charts this ongoing process of the queering of our culture.

The curator of the exhibition is Jonathan David Katz, PhD, Visiting Professor of Gender, Sexuality and Women’s Studies at The University of Pennsylvania and chair of the doctoral program in Visual Studies at the University at Buffalo. 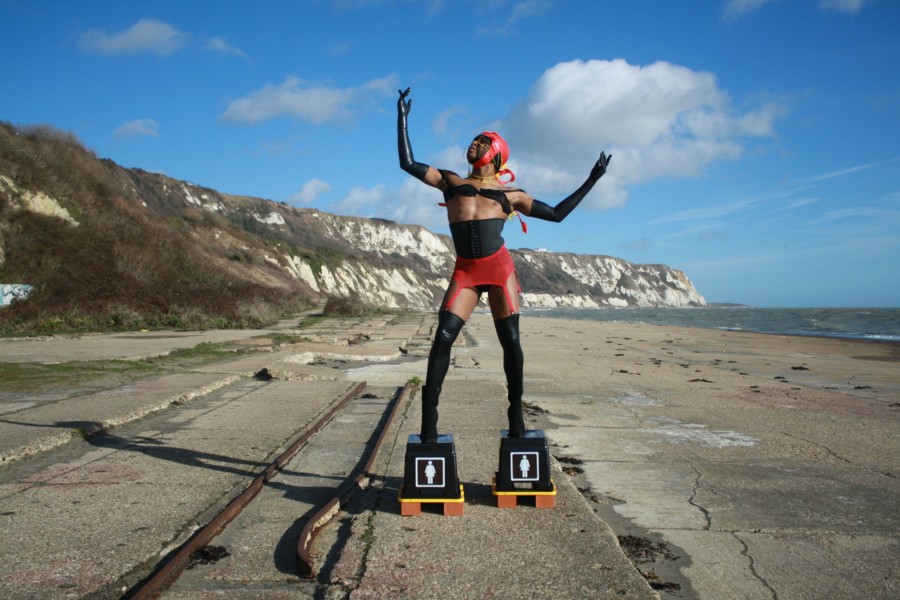