~This is an outdoor screening, please feel free to bring blankets or outdoor chairs to sit on for your comfort~

Please be considerate of the audience and subject-mater, Bedsheet Cinema is a safe-space and anyone who acts otherwise will be asked to leave.

Bring your friends!! SRSLY, having trouble getting LGBTQ people to show up! Makes me sad, but you do you babes.

We’ll be spending roughly half of this year looking at and talking about AIDS and its impact on the course of LGBT community through the 1980s. I’ll be switching off in-between with more “feel-good” films, especially with the rise of LGBT people in more prominent mainstream films as well as looking further out into a few foreign films that start to finally make their presence known as well. We’ll start the year as the decade started, the rise of a new disease that seemingly struck the gay male community with little remorse and would ultimately alter the shape of not only the gay community but the world at large.

This month we’ll be taking a look at the m/m side of romance, with two films that take place in Britain at very different time periods. One Edwardian, the other contemporary. These films are especially significant in the greater scope of the series for how infrequent romantic films depicting two men are. Both films also feature early roles for two British actors who would obviously go on to bigger things.

“My Beautiful Laundrette” (1985) Directed by Stephen Frears. An ambitious Pakistani Briton and his white boyfriend strive for success and hope when they open a glamorous laundromat.

“Maurice” (1987) Directed by James Ivory. After his lover rejects him, a young man trapped by the oppressiveness of Edwardian society tries to come to terms with and accept his sexuality.

I’m doing my best to read-up on as much LGBTQ film theory/history as I can and will be happy to moderate discussion after the films have been shown! 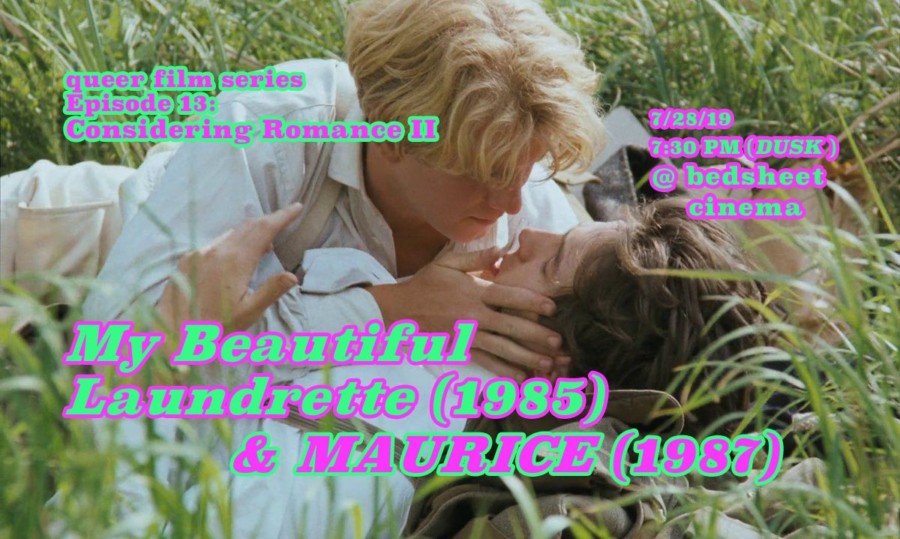