Join us at moniquemeloche for a discussion between artists
Cheryl Pope and Brittney Leeanne Williams
Saturday, July 27 at 1pm

In their current bodies of work, both artists investigate the classic and ubiquitous motif of the nude human form, updating this timeless theme by different means and to varying ends. Pope’s solo exhibition, BASKING NEVER HURT NO ONE, is currently on view and Williams is part of the concurrent and complementary group exhibition Show Me Yours. Both shows continue through August 17. Together, Pope and Williams will discuss the sources and influences of their explorations, arriving at new insights and avenues of reflection.

Cheryl Pope (b. 1980, lives and works in Chicago and New York) received her BFA and MA in Design from the School of the Art Institute, Chicago, where she is now an Adjunct Professor. BASKING NEVER HURT NO ONE is Pope’s fourth solo show with Monique Meloche. Although seemingly a departure from the performative, often sports-related projects for which she is known, this new body of work continues the artist’s examination of systematic social concerns, unexpected material interventions, and simultaneously introduces a novel formal language. Pope puts forth a personal intimacy as yet unseen in the artist’s oeuvre. Made of wool roving on cashmere – unspun wool needle-punched into a cashmere support – these “paintings” are textural explorations of the complicated sensuality evoked by a semi-anonymous biracial couple.

Brittney Leeanne Williams (b. 1990, lives in Chicago) attended the School of the Art Institute, Chicago, IL (2008-2009) and the Skowhegan School of Painting and Sculpture, ME (2017). She is currently an Emerging Artist Fellow at the Richard H. Driehaus Museum, Chicago. Williams explores the potential of the female body to both encapsulate and express a variety of psychological states. Acting as an amalgamation of both the artist’s identity, as well as that of her female family members, the bodies she depicts serve as communal symbols of hope and love, pain and loss. 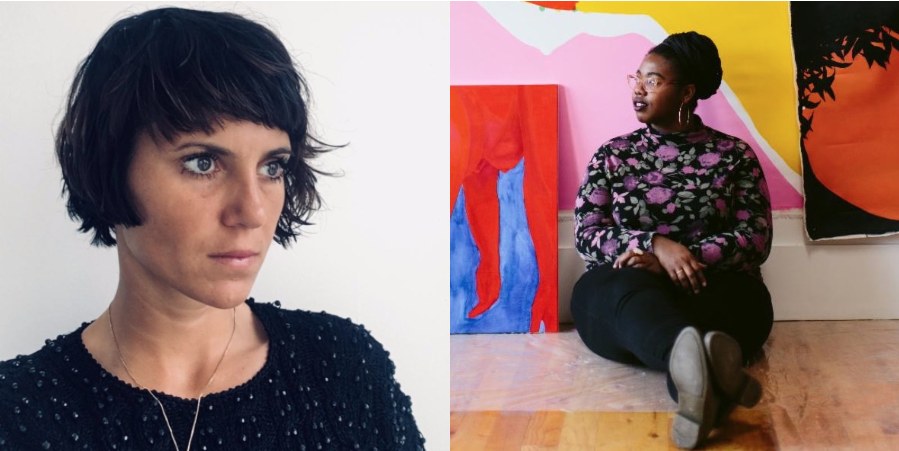