Artists’ Talk Led by Hamza Walker for “An Archive of Touch”

Join us on Saturday, July 27 at 1pm for a discussion between Hamza Walker, Executive Director of LAXART, and several of the artists in An Archive of Touch. Light refreshments will be served. It will be a great afternoon!

An Archive of Touch is a group show of works by Yesenia Bello, Dana DeGiulio, Andreas Fischer, Alejandro Jiménez-Flores, Joyce Lung, SaraNoa Mark, and Kellie Romany. The exhibition will open on Sunday, June 30th with a reception from 3-6pm, and will be on view through Saturday, August 3rd. Gallery hours are Fridays and Saturdays, 12-4pm, and by appointment.

Its title drawn from an artist’s statement written by Brooklyn-based painter Dana DeGiulio, An Archive of Touch expands focus beyond a single medium to feature paintings, drawings, and ceramic sculptures where physical touch interacts with materiality in ways that are both expressive and archival in nature.

Yesenia Bello’s organic ceramic sculptures demonstrate the artist’s ongoing pursuit of thinking with the hands, each form ‘caught’ at different moments of compression and release. Bello acts quickly—as she also does with drawing—embracing wet clay’s malleability, while responding to its inherent desire to cave to gravity, as she coaxes the clay to hold itself. In this exhibition, the arrangement of Bello’s sculptures and the irregular table supporting them act as an impermanent map of relationships, changed and traced by the artist over the course of the exhibition.

Bio: Yesenia Bello (b. 1994 Norristown, Pennsylvania) makes installations, drawings, and sculptures in Chicago. Her work has been presented locally at places like Tiger Strikes Asteroid, The Overlook Place, DfbrL8r Gallery, Clutch Gallery, and Hull House Museum, Lillstreet Art Center as part of Collective Cleaners. Recently, she completed a HATCH Projects 2016-2017 residency at Chicago Artists Coalition. Yesenia spends her day-to-day fundraising for the thoughtful youth and adult artists of Albany Park Theater Project. Between 2011-2016 she was co-founder and organizer of Walla Fest, a volunteer run music and arts festival that worked to create community for emerging artists around the Philadelphia area. She received her BFA from the School of the Art Institute of Chicago with a focus in Fiber and Material Studies.

Each of Dana DeGiulio‘spaintingsrepresents a day — the day in which it was made, as well as the artist’s experience of existing with and in relation to that painting during the time of its making. Indeed, DeGiulio says that the painting is only finished “when it doesn’t feel like me anymore.”

DeGiulio’s statements about painting provided the inspiration for “An Archive of Touch,” specifically in an artist’s statement for a 2012 exhibition at Iceberg Projects, where the artist writes, “To persist at an encounter with the poor little world is the work of the artist. A test, and I think we do it for each other. To enact a critical metaphysics out of love, to ask and play and choke and fail, to posit small actions as consequential, emphatic, necessary, to insist on painting as an archive of touch, is hopeful, is hungry. My community exceeds me, the gift somehow never leaves my hands.”

In organizing this group show, we have used DeGiulio’s description loosely, as a springboard to a wider examination of the ways in which touch, gesture, repetition, feelings, and acts of collection and preservation inform the work of seven contemporary artists.

Bio: Dana DeGiulio, 41, teaches painting in New York. Her book Nefertiti for the Blind was released in February.

Andreas Fischer‘s paintings offer multiple sites of touch: every brush stroke through which Fischer’s enigmatic forms are realized can be seen as a form of touch and an attempt to reach outward. The artist paints, trusting that the painting can foster a real, psychologically complex connection with viewers–in other words, touch them. As Fischer has said in an artist’s statement, “intimacy is the goal…unless that is too weird.”

Bio: Andreas Fischer has had solo exhibitions at The Riverside Arts Center’s Freeark Gallery; The Museum of Contemporary Art Chicago; Hudson Franklin, New York; Dan Devening, Chicago; Andrew Rafacz, Chicago; and Zolla Lieberman, Chicago. He has participated in projects and exhibitions at The Mattress Factory, Pittsburgh; Nathalie Karg Gallery, New York; Regina Rex, New York; Green Point Terminal, New York; Minotaur Projects, Los Angeles; LaMontagne, Boston; Hungryman, San Francisco; Important Projects, Oakland, CA; Chicago Cultural Center; and The Hyde Park Art Center, Chicago, among others. He has been a resident at the International Studio and Curatorial Program in New York and is an Artadia award winner. Fischer has a BFA in Studio Art from The School of the Art Institute of Chicago and an MFA in Studio Art and an MA in Art History from The University of Illinois at Chicago.

Alejandro Jiménez-Flores’ delicate pastel and colored pencil paintings explore the multiplicity of image, memory, and language as they translate floral imagery mailed to them by their mother and aunt, or shared by friends via photographic imagery, across different surfaces over time. During an image-transfer process, parts of the initial drawing fade or soften, while other contours and spaces are traced with new marks, folding together the past and present. As the flowers mutate from one work to the next, appearing at times to hover just above the surface, Jiménez-Flores’ gestures point to a desire for “a language that is not yet there.”

Bio: Alejandro Jiménez-Flores (b.1989) is a process-based conceptual artist making gestures that occupy the space of painting, writing, and performance. Their practice is concerned with how the language we have, or lack, subordinates our subjectivities, identity formations, and the space we are allowed to occupy. They have had recent solo exhibitions at BAR4000 (Chicago, IL), Heaven Gallery (Chicago, IL), and Efrain Lopez Gallery (Chicago, IL), as well as a two person exhibition at Apparatus Projects (Chicago, IL) and performances at Gallery 400 (Chicago, IL) and the Museum of Contemporary Art Chicago. They have been featured in reviews and publications such as New American Paintings, Chicago Artist Writers, and Newcity Art. They attained a BFA from the University of Illinois at Chicago In 2012.

Joyce Lung’s humanoid ceramic oddities juxtapose and sometimes literally intertwine the dichotomous materialities of hard and soft, looking and touching, as a way for the artist to come to terms with the “nature vs. nurture” debate as it relates to her own family history and the deep and at times confusing emotional bond she formed with a caregiver during her early childhood years.

Bio:Joyce Lung/Lung Yuet Ching was born and raised in Hong Kong. She is a graduate of 2019 of MFA under Ceramics department in School of Art Institute of Chicago. She received her bachelor’s degree from Hong Kong Baptist University Academy of Visual Arts in 2015.

Reminiscent of ancient artifacts, SaraNoa Mark’s carved clay drawings—rendered on both solid wooden panels and on delicate sheets of paper—evoke archaeological fragments as well as natural marks etched into landscapes by wind and water. Through the subtractive process of carving, Mark materializes the invisible activity of time, speaking to absences and erasures within documents, landscapes, stories, and records. The shape of each mark is determined by distinct carving tools which together act as an alphabet, recalling the history of drawing as an emergent form of writing.

Bio: SaraNoa Mark (New York, NY b.1991) pursues a drawing practice that reflects a desire to evidence the constant and invisible activity of time. After graduating from the Pennsylvania Academy of the Fine Arts in 2015 SaraNoa was awarded a European travel scholarship. Mark’s work was supported by grants from The John Anson Kittredge Fund and a SPARK Microgrant. She has been an artist in residence at The Lois and Charles X. Carlson Painting Residency, Sedona Summer Colony, Art Kibbutz, and the Montello Foundation, and was a 2019-2020 BOLT resident at the Chicago Artists Coalition. SaraNoa is Luminarts Fellow and a Director at the 4th Ward Project Space in Chicago. Next year she will pursue an arts research Fulbright in Turkey.

Kellie Romany isan abstract, non-representational, figurative painter interested in bodily representation, materiality, and the history of the painting process. Using a color palette based on skin tones, Romany paints to create portraits—which simultaneously function as archives—of diversity and the systems her body lives within. “My approach to painting is as physical and bare as my work,” states Romany. “I manipulate the tint with my hands, watching for rather than forcing reactions. When working on a large scale I rush from one end of the canvas to the next, catching and re-distributing the movement and placement of color to build layers over time. The paint is coerced to be an illusion of something and is a reflection of a body, whether whole or partial.

“Fragments of thought from my mother, stories that engage femininity and sincere curiosity about how to comprehend all the inherent contradictions of my experience inform my approach to painting.”

Bio:Kellie Romany received a Masters of Fine Arts in Painting from the School of the Art Institute of Chicago in 2011 and a Bachelors of Fine Arts from the Maryland Institute College of Art in 2008. Romany has exhibited both nationally and internationally, including High Museum of Art in Atlanta, DePaul Art Museum in Chicago, The Harlem School of the Arts in New York, Alice Yard in Trinidad and Tobago, and fiebach, minninger in Cologne, Germany. 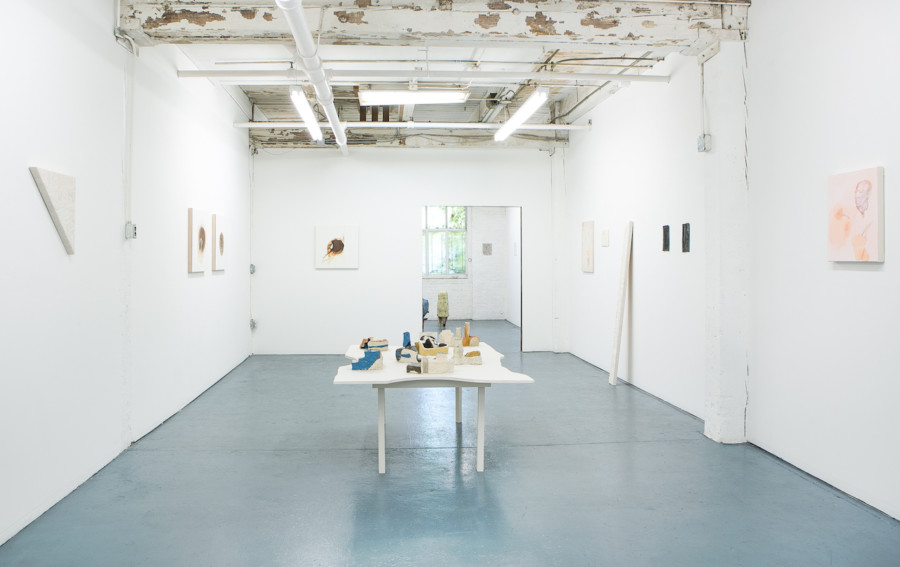