Amanda Sukenick is a film-maker and sculptor residing in Chicago. She received her BFA & MFA from SAIC in 2007 & 2015 respectively, in Printmedia. She started making Youtube videos in 2009, originally as a toy reviewer, and then as an Antinatalist activist. She is now producing her third movie, Revery, as well as her second web series, EFIL-TV: Antinatalist Television.

“My work is a study of the tension, between being both an archivist, and an extinctionist. Through projects in print media, sculpture, internet archive database building, performance, music, video & new media, my focus revolves around such concepts as Antinatalism/EFILism, extinction & The Right to Die. I am in love with the world, but I see the suffering sentience causes, and believe it should no longer exist. Lets hold on to everything tightly, lets kiss it and tell it we love it. Lets create, archive and index, and then lets say one last goodbye.”

Andrew Ek is a self-taught painter living and working in the Chicago area. My paintings are crystallized visions that have surfaced or have been captured, usually at random, from a thought or emotion. The creative process usually begins upon viewing an image or visiting a place and I then feel compelled to develop that idea into a painting. I take delight in transforming banality into the sphere of magical realism and my aim is to envelop the viewer into an unfolding narrative in a vivid, cinematic context, similar to a movie still.

About Landing Projects
Landing Projects is a domestic art space located in the Irving Park neighborhood of Chicago, beneath the storage racks of Workman’s enclosed back apartment entry landing. Initially, Workman thought to convert a spacious storage closet in the rear of the space into a project space, but this instead became the Bookcase Motel. As a curatorial intrigue, the idea of showcasing work outside the commercial mainstream, work that would be seen as too obscene or macabre, would work well in the context of a closet space. Similarly, the back landing, with its garage-like quality, provides a perfect project space environment for experimentation, trial and error. Moreover, unconstrained by the self-censorship of commercially-motivated spaces, Landing Projects will seek to expand the boundaries of current art practices.

A project of Bridge. 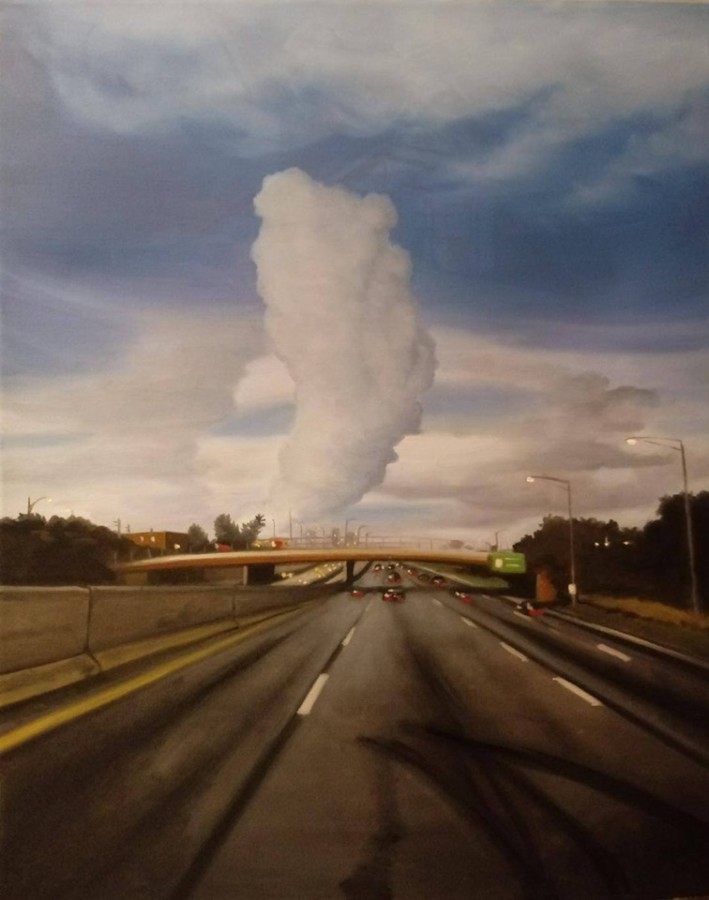