Ada Cheng: Straight to the Heart!

On view through Monday, July 29th

In this storytelling basics workshop, we will discuss basic tenets of this art form, such as detailed descriptions, basic story arc, emotions (the importance of vulnerability), relationships with the audience, and purpose of storytelling. Students will have the opportunity to integrate these elements of storytelling and practice telling during the four sessions.

This event is open to people of all identities and backgrounds.

Instructor:
Ada Cheng is a professor-turned-storyteller, performing artist, and producer of several storytelling shows. She was a tenured professor at DePaul University for 15 years (2001-2016) and taught on gender, race, sexuality, masculinity, and immigration. She debuted her first solo show, Not Quite: Asian American by Law, Asian Woman by Desire, in 2017 and has since performed it at Kansas City’s National Storytelling Conference, Capital Fringe Festival in D.C., Minnesota Fringe Festival in Minneapolis, Boulder Fringe Festival, and Kum & Go Theater in Des Moines. She debuted her second solo show, Breaking Rules, Broken Hearts: Loving across Borders in 2018 and has since performed it at The Exit Theatre in San Francisco, Theatre Row with the United Solo Theatre Festival in New York, and Theatre 68 with Women’s Theatre Festival in LA.

Ada is a speaker for Illinois Humanities 2019-2020 Road Scholars Speakers Bureau. She is also a teaching artist for Changing Worlds and an adjunct faculty member at Dominican University. She is the producer and the host of four storytelling shows, including Pour One Out: A Monthly Storytelling Series, Am I Man Enough?: A Storytelling/Podcasting Show, Talk Stories: An Asian American/Asian Diaspora Storytelling Show, and Speaking Truths Series. Her motto: Make your life the best story you tell. 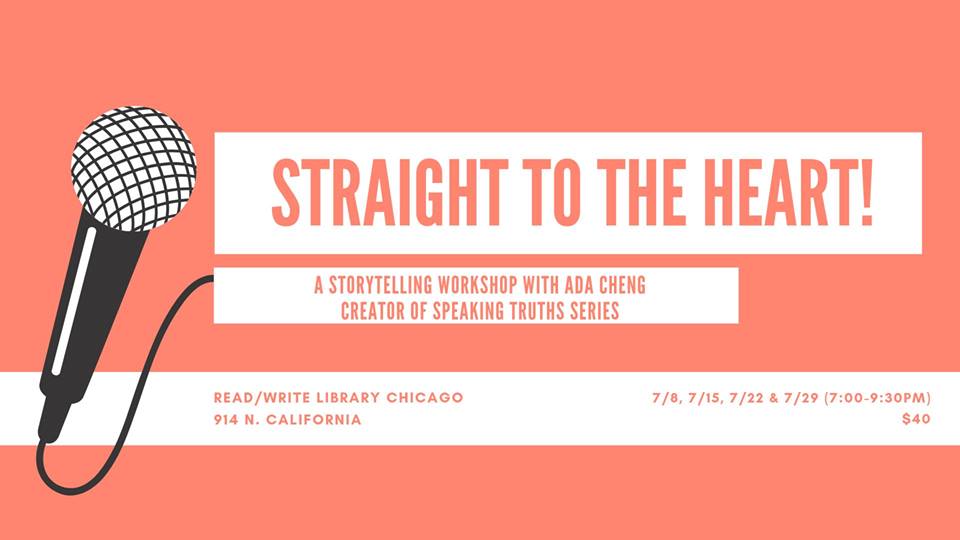