On view through Thursday, August 22nd

Tiger Strikes Asteroid Chicago is pleased to present The Endless Body, a group exhibition featuring work by Ever Baldwin, Daniel Bruttig, Joe Cassan, Katy Gallagher and Selina Trepp, along with a text by Maggie Taft.

In its inherent complexity and multiplicity, the body is a perennial subject. Approaching it through a range of materials and processes, the artists in this exhibition present a group of specific engagements with the body that are driven by their own nuanced concerns. Encapsulated in dimensional frames, Ever Baldwin’s paintings blur and merge bodies as they explore the ambiguity of gender identity. Daniel Bruttig and Katy Gallagher collaboratively alter found “how to” drawings, rendering them strange. Joe Cassan’s constructed body parts evoke the relationship between animal and human through an emphasis on the handmade. Selina Trepp’s “dirty drawings” emerge out of an improvisational process that harnesses chance, accident and discovery. Together, the work in this exhibition exemplifies the boundless potential of the body as a flexible and ready subject.

Ever Baldwin received their MFA in Studio Art at the School of The Museum of Fine Arts/Tufts University her BFA in Painting from Maryland Institute College of Art. They have presented or will present work in solo and group exhibitions at Real Eyes Gallery (North Adams, MA), Rema Hort Mann Foundation and Museum of Art and Design (New York), Marwen (Chicago), Transmitter (Brooklyn, NY), D.R. Evarts Library (Athens, NY), Eddy’s Room (Brooklyn, NY), September Gallery (Hudson, NY) and Samson Projects (Boston, MA), among other venues. Residencies include ACRE, Atlantic Center for The Arts, Ragdale, Byrdcliffe, Museum of Art and Design. In 2014, they received a DCASE Individual Artist Grant in Chicago. They currently live in Castkill, NY.

Daniel Bruttig (b. 1975, Milwaukee, WI) received a BFA from University of Illinois at Chicago in 2001 and an MFA from the Department of Art Theory and Practice at Northwestern University in 2010. He has presented work in group and solo exhibitions in New York, Los Angeles, Chicago, Toronto, and Milwaukee. Bruttig has contributed work to the Renaissance Society at the University of Chicago, The Hyde Park Art Center and Evanston Art Center. Collections include Moscow, Twitter New York, San Diego, Chicago, Madison and Milwaukee. In 2009 he received the Dedalus Foundation nomination. Bruttig lives and works in Chicago, IL. In 2010, Bruttig received the Joan Mitchell Foundation Emerging MFA nomination. He is represented by Marquee Projects in New York.

Joe Cassan received a BFA from University of Illinois at Chicago in 2001 and an MFA from the Department of Art Theory and Practice at Northwestern University in 2018. He has participated in solo and group exhibitions at Rockford Art Museum and Golden Gallery, Iceberg Projects, Soccer Club, Lula Café, Regards Gallery, Peregrine Program, and Western Exhibitions (all in Chicago), among other venues.

Katy Gallagher (b.1980, San Diego, CA) received an M.S. in Historic Preservation from the School of the Art Institute of Chicago in 2009. She currently works as a Historic Preservation Consultant and is working towards an M.S. in Occupational Therapy at the University of Illinois at Chicago. Katy is also a mom, an aspiring screenwriter, and an estate sale enthusiast.

Maggie Taft is an independent scholar and founding director of the Haddon Avenue Writing Institute, a community-based writing center. Before establishing the Institute, she earned a PhD in art history from the University of Chicago, where her dissertation “Making Danish Modern, 1945–1960” received the 2015 Dean’s Distinguished Dissertation Award in the Humanities. From 2014–16 she served as Andrew W. Mellon Postdoctoral Fellow in Modeling Interdisciplinary Inquiry at Washington University in St. Louis. Taft’s writing and reviews have appeared in many magazines and journals including Artforum, The Point, Texte Zur Kunste, Design and Culture, and The Journal of Design History. She is coeditor of Art in Chicago: From the Fire to Now (University of Chicago Press, 2018), the first single volume history of art in Chicago from the nineteenth century through the present day.

Selina Trepp (Swiss/American, b.1973) is an artist researching economy and improvisation. Finding a balance between the intuitive and conceptual is a goal, living a life of adventure is a way, embarrassment is often the result. She works across media, combining performance, installation, painting, and sculpture to create intricate setups that result in photos, drawings and animations. In addition to the studio-based work, Selina is active in the experimental music scene. In this context she sings and plays the videolah, her midi controlled video synthesizer, to create projected animations in real-time as visual music. She performs with a varying cast of collaborators and as one half of Spectralina, her long running audiovisual collaboration with Dan Bitney.

About TSA
Tiger Strikes Asteroid is a network of artist-run spaces with locations in Philadelphia, New York, Los Angeles, and Chicago. Each space is independently operated and focuses on presenting a varied program of emerging and mid-career artists. Our goal is to collectively bring people together, expand connections and build community through artist-initiated exhibitions, projects, and curatorial opportunities. We seek to further empower the artist’s role beyond that of studio practitioner to include the roles of curator, critic, and community developer; and to act as an alternate model to the conventions of the current commercial art market. 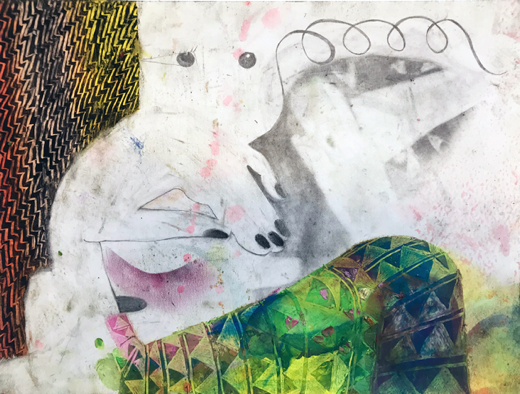