A Performance by Cassandra Davis in collaboration with Katinka Kleijn

LITHIUM is pleased to announce Raising Girls, a video installation and time-based sculptural sound-performance by artist Cassandra Davis and cellist Katinka Kleijn. Davis and Kleijn will attempt to divine the inherent sounds from within textiles, bodies, and exhaustive tension. A phenomenological expedition fully heard but only seen with the light from Davis’ video Raising Girls, the artists will premiere this 30-minute work composed specially for LITHIUM Gallery.

Raising Girls parses out gender, sexuality and patriarchy within Evangelical America. It explores the gendering of girls, James Dobson’s pardon of serial killer and rapist Ted Bundy, reclamation of sacred feminine spaces, play, innocence, and the queer gaze. Frames of the video move between what feels like archival images, to crime scene photos, to glimpses of intimate bodies. Flashbacks form an afterimage that burns a memory that is mesmerizingly difficult to reconstruct. Through sound and image, Davis and Kleijn propose new ways of accessing embodied trauma.

Special thanks to artists María Luisa Conlon, Polly Jane, Ona Siân, and Chloe Cucinotta for their collaboration in Raising Girls.

Cassandra Davis is a Chicago-based artist with an MFA in Fiber and Material Studies from the School of the Art Institute of Chicago. Their solo shows include No Body on Earth But Yours in conjunction with the Chicago Underground Film Festival, and Of Roses and Jessamine at SUGS gallery in Chicago, with an upcoming solo show at G-CADD in St. Louis. Davis has shown in group exhibitions and screenings at York St. John University, UK, Tile Blush in Miami, FL, The Art Institute of Chicago, Museum of Contemporary Art, The American Medium in NYC, Terrain Biennial, Chicago Home Theater Festival, Mana Contemporary, Sullivan Galleries, and the Silent Funny in Chicago, IL. They have been awarded the Oxbow Summer Artist’s MFA Residency, Roger Brown Artist’s Residency, and the IOTO Summer Residency, Shapiro Center Eager Research Grant, the World Less Traveled Grant, Dean’s Merit Scholarship, and has been lecturing faculty in Fiber and Material Studies at SAIC. Davis is currently an artist in residence at the Chicago Artist’s Coalition as part of the HATCH program.

Cellist Katinka Kleijn enjoys a genre-defying career in solo, improvisation, chamber music and orchestral performance. As soloist she appeared with the Chicago Symphony Orchestra, The Hague Philharmonic, and at the Tokyo Metropolitan Theater. She premiered Dai Fujikura’s Cello Concerto at Lincoln Center, with the International Contemporary Ensemble (ICE), which was released live on Minabel/SONY Japan Records. Known for her innovative individual projects, she appeared in recital at the Library of Congress, Carolina Performing Arts, and the Chicago Humanities Festival. A collaboration with the performance art duo Industry of the Ordinary resulted in “Intelligence in the Human-Machine”, a duo for cellist and brainwaves. This year, the City of Chicago presented “Water on the Bridge”, for 30 cellos, 2 cellists and swimming pool at the 2000 square foot Eckhart Park Natatorium, created in collaboration with Lia Kohl.

Additional projects include a VR/3D video of Bryan Jacobs’ “ly ful hood” for cello and robot instruments, commissioning Marcos Balter for a Bach Suite companion piece, performing in duo with Du Yun, with Tortoise at Pitchfork Midwinter, and receiving a commission for the free improv Instigation Festival Orchestra in Chicago. A member of the Chicago Symphony Orchestra and the International Contemporary Ensemble, she has a working duo with guitarist Bill MacKay.

LITHIUM has an accessible elevator, located at the rear of the building once you enter through the S Jourdan Ct. entrance. LITHIUM is on Floor 2. Please call 846-440-6751 for any issues with building accessibility. Please note that strobe-like effects will be used in the performance. 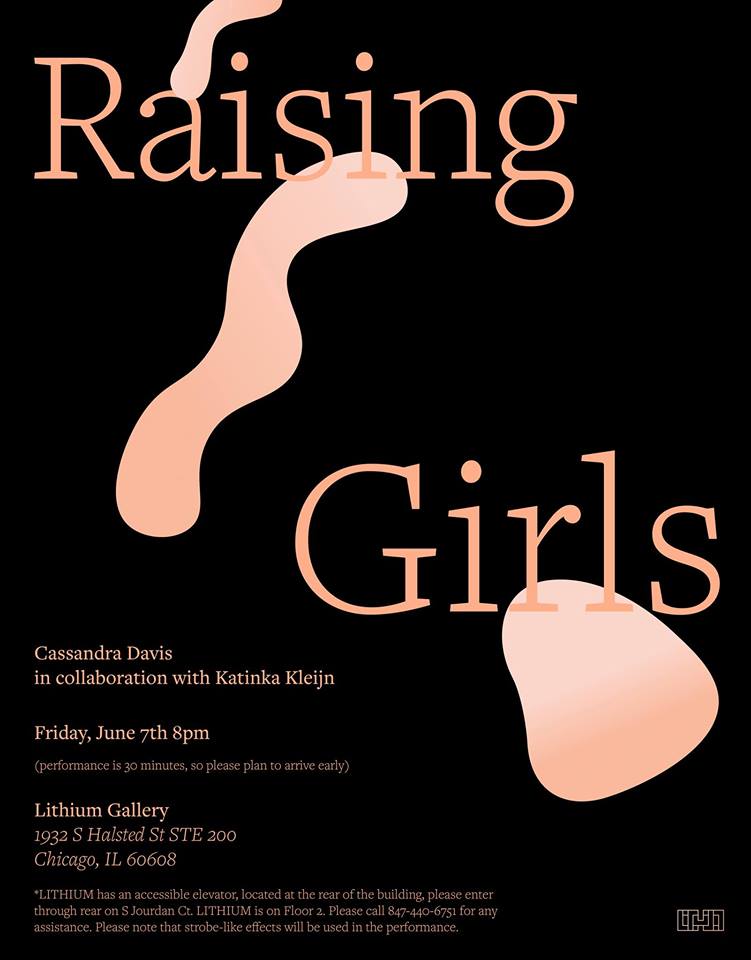