The title was taken from the eponymous book by British psychoanalyst D.W. Winnicott a collection of papers and case studies, in which Winnicott examines the role of play and transitional objects, in an infant’s developing sense of individual subjectivity. A transitional object is any ephemera (often a toys) that allows a child to mediate between, and eventually differentiate their “internal” and “external” realities (inner and outside worlds). Typically, maternal figures steward a child’s sense of self through the gift of a transitional object. By recognizing this object as not-them, but something within a greater world-context, children come to understand their lived experience as subjective and cultivate a sense of agency.

Children typically dis-invest transitional objects of their emotional and mental significance as they mature. But Winnicott suggests that artists, through their work, sustain a child’s “intensity of experience,” that unchallenged distinction between inner and exterior realities. Incidentally, the five exhibiting artists claim these ideas – inner and external realities, maternal figures (maternity and motherlands), the process of investment and disinvestment in an object’s significance – as the rich grounds on which they work. Apart from a necessary levity that play provides, it is no-doubt a subversive act and imperative today, as groups and individuals assess their origin stories, and as realities come increasingly into conflict with one another.

Molly Colleen O’Connell (b. 1986, FL) is an interdisciplinary artist and educator based in Chicago, IL. Her work mixes unbelievable truths and strange fictions to create a world of perverted feminist hallucinations. She is currently working on a new book about spooky children and a devil, which will debut this fall printed by Colorama press (based in Berlin). MCO’s work has been performed, screened and exhibited at the Museum of Contemporary Art (Chicago), AALA Gallery (Los Angeles), Evening Hours (New York), Waiting Room Gallery (Tokyo), Vox Populi (Philadelphia), MOHS Exhibit (Copenhagen), and sophiajacob (Baltimore). She teaches comics print & drawing courses at SAIC, CAPE, Marwen, & Music House to students of many ages.

Lariel Joy creates durational live performances and immersive installations that involve one-on-one interactions, traditional handicrafts such as hanbok making and cowboy boot making, sewing, crocheting, weaving, construction of dome structures, robotics and object making. She works with the ideas that decolonization is metamorphosis and pussies are meant to shine. She also builds Wombspaces in order to bring out the voices of the wombs and rescript the womb as a space with infinite possibilities, reproduction being one of the potentials. She is in search of the vaginologos and attempts to excavate her body and voice. She received an MFA from the performance department of the School of the Art Institute of Chicago.

Cristina Victor’s interdisciplinary art practice explores ways to generate inclusive dialogue about the layered complexities inherently involved in discussing identity. Through performance, textiles, installation, and public engagement, she designs and constructs ways to expose, critique and challenge binary perspectives on culture, often delivered by mass media outlets. Research and Vexillology act as a foundational thread for her textile works. Whether collaborating with the public, artists, organizations or working within auto-ethnography, Cristina creates works that are visually seductive, symbolically loaded and experimentally activated.
Victor holds an MFA in New Genres from the San Francisco Art Institute and a BA with a concentration on Latin American Studies from Sarah Lawrence College. She has exhibited and performed nationally, is an avid vexillolinaire, Cuban and Miami history freak and Spanglish specialist currently based in Brooklyn, NY.

Lukaza Branfman-Verissimo is an artist, arts educator, activist, storyteller & curator who lives and works in Oakland, California. Branfman-Verissimo’s work is informed by her commitment to craft and community, her engagement with society, and interests in storytelling and cultural geography. Through the processes of story collecting, printmaking, painting and sculpture building, she strives to re-create and re-tell her personal tales and those of the people that surround her. These tactile, process-based mediums reflect the multi-layered complexity of the voices echoed in her work. Through interacting with her art, viewers are prompted to recall and tell their own stories, offering power and weight to the creation of a larger dialogue.

Lukaza is fascinated by the relationship of the individual to society. With her mixed identity as a queer, Jewish-American, African-Brazilian woman, it places her in a midst of numerous communities nationally and abroad. Her stories are intertwined with those of many others. The engaging process of gathering the narratives of people and communities that surround her is on equal ground with the artistic craft of telling them.

Lukaza Branfman-Verissimo received her BFA from California College of the Arts. She has had solo exhibitions at Deli Gallery in Long Island City, NY, Lago Projects and E.M. Wolfman in Oakland, and Bolivar Gallery in Los Angeles. Her work has been included in exhibitions and performances at STNDRD, San Francisco State University Gallery, Signal Center for Contemporary Art, September Gallery, Deli Gallery, Southern Exposure, SFMOMA, Kala Art Institute, Osaka Art University, The Berkeley Art Museum, Highways Performance Space and UNTITLED. Lukaza was a Yozo Hamaguchi fellow at Kala Art institute in 2015 and has been a visiting artist at the College of Design, Architecture, Art Practice at University of Cincinnati, at New York University, at California College of the Arts and at Mills College. She is the co-founder and lead curator at Nook Gallery, a gallery in her home kitchen.

Jerico Domingo was born in 1995 in Muscat, Oman. In 2017, they received their Bachelor’s in Fine Arts with an emphasis in Art History, Theory, and Criticism at the School of the Art Institute of Chicago. During their time in college, they had the opportunity to work as a Co-curator of Philippine Objects at the Field Museum of Natural History where they organized a series of monthly events called Pamanang Pinoy using the objects within the collection as conduits for community discussion. As an emerging artist, Domingo has had the opportunity to showcase their work across the country including Late Bloomers at Supplyframe Design Lab in Pasadena, California, Nandito Na Ako at Tipton Gallery in Johnson City, Tennessee, ITINERANT at Last Frontier in Brooklyn, New York, and File, Save, Export at 187 Augusta in Toronto, Canada. In collaboration with AFIRE Chicago, their artist collective, Export Quality, was awarded the Crossroads Youth Fund for Social Change to support their documentary series Nakikita. They recently attended the ACRE residency in Steuben, Wisconsin having received the Brenda Green Gender Inclusivity Scholarship. Domingo currently lives and works in Chicago, Illinois.

Max Guy incorporates videos, cut silhouettes, text, and dramatic lighting into larger, often theatrical installations and thought experiments. He clumsily pursues themes of post-racial discourse, existentialism, social-psychology, cosmopolitanism, and self-affirmation. Responding to the context of Chicago and his own upbringing in New York City, his work constitutes an ongoing self-portrait—a quiet, personal mythology. He has a BFA in Interdisciplinary Sculpture from the Maryland Institute College of Art, and an MFA from the Department of Art, Theory and Practice at Northwestern University. Max has exhibited work at Prairie, The Back Room, and Bar 4000, Chicago; Moonmist, Houston; 321 Gallery, New York; What Pipeline, Detroit; Federico Vavassori, Milan; Nudashank and Franklin Street, Baltimore; he has performed at Signal and Canada Gallery in New York, The Museum of Contemporary Art Chicago, Sector 2337, and Comfort Station. 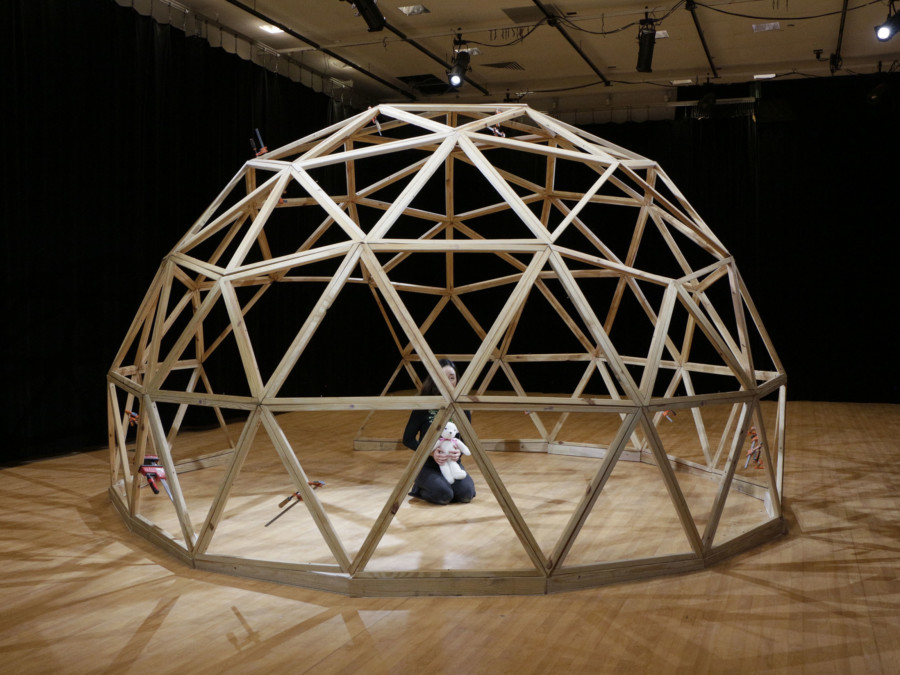